What is your favorite game mechanic in Conan Exiles?

In No order…
Building - Exploring - Survival.

Exploring world is most of fun, next to killing stuff. Building adds to RP part of exploring. Survival just kinda adds rp element. (I have mine turned down to 0.7, to stop micro management of it)

I enjoy that in games,

Combat… PVE for this game, thou…again like broken record on repeat. >_>
Games like Dragons Dogma and Monster Hunter excel at combat, Conans isnt bad… I’m spoiled by those 2 games. Nothing is gonna beat Red Dragon or flock of bandits in Dragons Dogma, or Rathain and Rathalos to me.

CE keeps me interested enough with bows and npc fights. Thou I can dream and hope some of large monster had more DD or MH ai. Maybe next game. XD

I love the survival combined with building/crafting
I enjoy PVE, but as a Co-op game… joining up with others etc…

Also… one of the best servers i have played on, was kind of a PVEVP(?) It was PVE during the week, PVP on the weekend, bases were safe, you were fair game.

A good survey and very interesting results and would be interested to see how/if the results have changed since the game appeared all the years back?

It is very interesting to see how this game has evolved from basic PvP and into Roleplay and PvE. When you scout about on many of the PvE/PvP-modified servers, it is incredible to see how so many have shifted from basic PvP to more challenging and evolved game-play that relies on more than just destroying stuff and into interacting with other players.

I am personally delighted to see the avatars being less relevant as they completely spoiled the game for many players on seeing bases reduced to rubble in seconds that had taken months to build (I do like the healing/pet/weapon enhancements only available via temples as they add to the game).

I would like to see more Admin-specific controls to things like the Purge and having the ability of having (small) bands of Purge NPCs that will move between random/defined routes and attacking players they meet. I would also like to see more cosmetic placeables in the game that currently are only available via Mods. The pending ‘idle’ actions will be great - but I do hope/wish that they include player thralls so players can have more interactive builds.

Otherwise, am still surprised by the awesome landscapes, sunsets and varied stuff that can be found. I have played several thousand hours and still find things I have never seen before - hidden chests and things on highest peaks, deepest depths, darkest tunnels.

Am looking forward to all the new stuff.

I would like to see more Admin-specific controls to things like the Purge and having the ability of having (small) bands of Purge NPCs that will move between random/defined routes and attacking players they meet.

Yes, more Admin control…
Every time I play the game, I have to grant myself Admin rights. (Wish it remembered)

As you mentioned there are other things - my main bit is, allowing it to save settings into next game play.

Then lag. And the latest would have to be disconnects to server while starting the game

And finally have gods and stuff that are still broke

Good thing we are getting mounts

Everyone still happy I not having blue screen problems. Not being a so called fan boy just GLAD things are working properly. Peace out.

While there are no surprises that Building and Exploration are the two top responses, I have to say Im pretty surprised that the Gods and Avatars option is lagging so far behind. To me it has always been one of Conan Exiles most unique and interesting features. Maybe it would have recieved more votes if it were just titled ‘Religion’ more generally…!? Im not sure. I only know that I love it.

If there were gods

Gods are a feature? Maybe they’ll have a dlc to have them in the game

Sure. There currently 7 gods in the game you can worship, 6 of which have Shrines, Avatars and various other benefits. As zerog said, Avatars, and only Avatars were removed as a temporary measure so that Funcom can get a handle on the duping which gives other players an unfair advantage. And I support this measure. I have said it before and ill say it again; all exploits must be eliminated without mercy.

But the good news is that one god is stll intact. Crom and all of the benefits he offers as a god are still in the game. Enjoy!

You can’t make a bubble. Period

They were probably removed with gods for tweaking, as they are crafted in the form of a token too. Without Avatars in play you dont even need them anyway. Save your hard earned Manifestation of Zeals for another day.

That being said, exploration is my absolute favorite thing about this game with building a close second place. I love that there are no invisible walls and that you can really go anywhere. All the little hidden secrets here and there are awesome, I just wish more meaningful items would appear in those pop up chests. The ghosts are a great way to guide people without being on the nose. The lack of handholding is great. Yes the journey steps are there but the game doesn’t have a magical line/pixie/bird, etc. telling you where to go and what to do; you have to figure it out on your own which is awesome. There are some areas however where you hear the “ghost” sound but don’t see one, so for the hearing impaired it might not be as immersive.

Really disappointed that no expansion of the map is going to happen. I would love to have more to explore. Maybe even add more NPC places where you wont get attacked on sight and have more places to use the silver and gold you collect. A thrall vendor that has unique thralls that aren’t quite T4, but maybe have a different bonus.

Like others have said, the religion aspect of the game could really use a lot of improvement. Your choice in the beginning has no meaning as you can get all the religions. Most people I know, don’t switch religions frequently, so maybe have a system where you can only have one worship center? It just seems like there could be so much more to religion. The armor you can craft is basically cosmetic only, but at higher tiers it should provide some sort of buffs. The weapons they provide should also have some uniqueness to them as well. Also, there are so many other gods in the universe to worship! you should definitely implement them in the game with their own shrines and what not. Hell, Xolti is already in Age of Conan!

I never really played with the avatars, but they should absolutely wreck and be overpowered. However they should require extreme resources to craft. Maybe add a new item so current “alpha clans” wont have stockpiles of the items when the updated avatars get released. Or in order to summon an avatar, extreme sacrifice is needed like the person/clan who summons the avatar, all their thralls die or something extreme like that. With the payoff being a badass super strong avatar to wreck a base.

Unique is about all gods have going for them thou. I didnt even bother summoning one for longest time.
When I did… got killed by one of npc’s who survived and ran of base to beat on me as i stomped mud hole into Asgard. XD

Then again… PVE they have limited use. I’ve used them more to fix God Mode glitch (were it wont turn off, but summoning a god would cancel it)

If NPC bases could be flattened… and stay died for 7days or something. XD maybe?

On private server, 2nd best use of them was cleaning up map. I’d make dungeons, I’d be in rafters as GM, friends would go thru MMO style. Gods made cleaning up place quick. XD

Not mention, I tend to pick Crom… and get stuck with 2 journal entries… (admin panel fixes one by placing any random altar) /shrugs.
I’m still waiting for my skull pile that does nothing but move journal entries for Crom users. xD

You just said avatars were nerfed and not bubbles. “As zerog said, Avatars, and only Avatars were removed as a temporary measure so that Funcom can get a handle on the duping which gives other players an unfair advantage.”

Just saying that at inception gods were part of the game. Pretty much broken

Now we’re stuck with players slamming alters next to their bases and land grabbing everything? in our instance fully leveled alter decaying because Dev are trying to fix the mesh issues after under water dungeon

What about the disconnects and bluescreens? When even logging into the game.

Oh ps. If your base is too big or you have a loota thrawls pet’s or lights, you need a PS4 pro or just turn yer settings to low to prevent lag and bluescreens

Do we get award for highest treb tower? 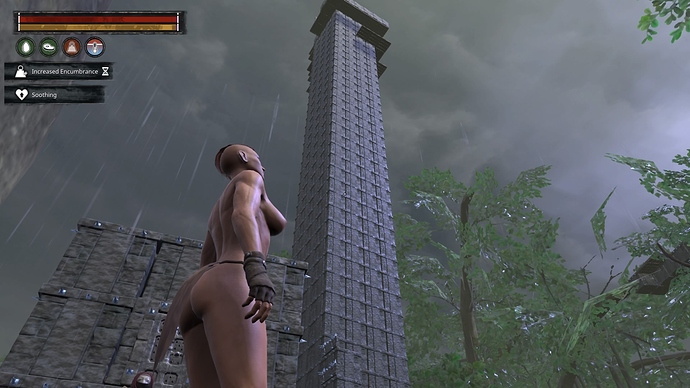 For me, building is wonderful! It grants you SO much freedom - you can build just about anyTHING you want anyWHERE you want. You can just use your imagination freely. So great!

I also really like the thrall (and pet) system - “populating” your buildings makes quite the difference. I would love for it to be expanded (patrolling thralls/pets, “active” animation for thralls/pets).

One thing I felt was missing from the poll: admin privileges. Having the option to customize your singleplayer server is awesome! Being able to try constructing “insane” buildings, that you wouldn’t be able to make on official servers, is great!

game mechanic in CE… none they are all broken.

the only thing I came to love about Conan when it doesn’t get broken for 7 weeks straight is building.

I want to build my 20x20 ( foundation is the measuring unit) and have my 32 thralls ( 16 bows and 16 melees) because thats the max amount of thralls you can have to defend your base.

the reason for the number? you cant have more than 4 melee thralls the others are just there to block the path for NPCs and become meat shields while only 4 melees will hit. and you can only benefit from 4 archers on each side of your house. so basically each structures within arrow reach must be at best 13x13 with 4 melee thralls on each side 1 archer taking 1.5 foundation of space between them.

I really love the building aspect of the game, of figuring out a clever and efficient floorplan for a given spot and seeing it evolve.

The Purge is also a hell of a lot of fun, and it’s not uncommon to see PvE clans band together to help one another out during them. It’s basically the main draw of PvE combat, IMO, so it kind of hurts when mechanisms like offline purge-meter depletion persist in spite of players clamouring against it.

Getting purged may be a scary prospect for some, but if you make allies and invest in your server, you can rest easy and look forward to a good challenge with friends. Yet denying some player that simply because they have demanding jobs or families to take care of (and can’t be online 4+ hours a day) is unfair in the extreme.

wait? I have made them. Are they not actually “working” as protection? I know tokens have been removed from even being craftable. but the dome of protection is craftable, and the bubble “shows” active.

@Ignasi @Hugo can you clarify please. I can stop wasting zeal if not actually doing any protection.