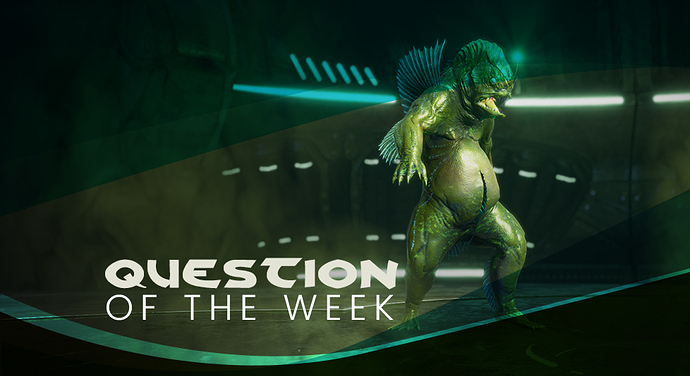 Greetings Exiles and welcome to our new Question of the Week!

Last week we asked you all what your favorite building style was based on a previous poll (What is your favorite game mechanic in Conan Exiles?). In those same results, you unanimously let us know that PVE combat is your preferred way to battle it out in the Exiled lands. So we thought it would make for a good Question of the Week to elaborate a bit on that aspect.

Since the Exiled lands are filled with all kinds of mobs, from puny human tribes who will scream from the bottom of their lungs if you’re skulking around like a Zamorian thief, to rhinos keen on home-run practice, we thought that maybe you’d have a preferred one to test your mettle against.

As usual, you won’t be able to see the results until you have voted in the poll, so any previous votes can’t steer your opinion. We also set the poll to multiple choices again, this time the minimum being one and the maximum of choices you can make being two.

Since there are so many different types of enemies, we chose to group them up a bit following this fantastic list gathered in the wiki. As you can see, many mobs are grouped into a single category, so if you want to single out your favorite (or…most infamous) enemy you like to face in the game, please let us know in the comments!

Find humans more fun for myself at least. Would not mind getting some camps with them in the frozen north. Have to travel south to Cimmera to crusade and spread Ymirs love, would be aswome to do so near home.

Ps, Arena Champion has brought me much joy and greif. More like her please.

They’re not just enemies, they’re people too, and as such, potential allies if presented with sufficiently persuasive arguments.

I like the danger aspect of 3 skull creatures and the like. Makes the fight a bit more of a real fight. Red Mother also springs to mind even though it is the same moves all the time it is still a tough fight!

I recall when encountering the revisited Sand Reaper Queen without knowing of her new moves and vomit… some of the most fun and WTF moments of joy for me. But then when you learn the patterns its just a matter of going through the motions…now if there could be a more random aspect added…

PS: Its fun to chop an npc exile in half mid war cry taunt, always makes me grin.

I don’t see “Dead Ones”. Was this this intentional?

Human types and Animals make up world. they fill in exploring type. I voted those 2.
Wolves, Exiles etc.

3rd vote, is Bosses. Gaint Croc and etc…not so much. But thought that goes into King Scourge is great side fun.

Exiles and other human NPCs. Its one of the most outstanding features over and above games like ARK.

EDIT: That’s also one of the reasons for requesting human/exiles only Purges. They are way more fun than animal purges. Now if they would actually siege a base, that would be awesome.

can i edit my vote? i wanted to vote for the bosses… (human ones)

Lol, I did the same before I saw bosses

For me the favourites fall into two categories. For fighting against: its the Undead. Reminds me just a bit of my Survival Horror forays, and the are at least a little challenging. For cosmetic and visual appeal: its Imps!

Those rambunctious little devils are so gosh damn (lousy word sensor) cute and funny, not to mention a barrel of laughs. I will sometimes follow one around discreetly just to listen to his jibber-jabber. And yeah thats probably just a bit sad. My dark kingdom to be able to have one as a pet…

Humans. At the end of the day, there’s nothing quite so relaxing as sticking a pointy bit of metal in your fellow man.

Bosses for me with humans a close second. Bosses were a bit boring, but with some of the new ones, specifically wine cellar minis being so deadly and the final having those extra bossy powers, it has really livened it up for me.

It’s predators and beast for me. Even at lvl 60 they’re still difficult to kill because they could give nasty effect like bleed or cripple. Human exiles are to easy, most are one shot kill. I hate undead. And bosses are just a big HP dump that takes a long time to kill if you’re alone but is too easy if you bring a thrall to tank. Then I didn’t fight those from the new dungeons, so perhaps I’ll change my opinion on them.

Just wondering, how are the percentages calculated that the totals are 150% rather than 100%?

I reckon it’s pretty simple.
As of this post, 70% of those who responded picked Human as (one of) their favorite enemies, and 42% picked Elites & Bosses. Some of those people will be the same person (one respondee), since the poll allows picking multiple options.

Whether that kind of polling gives more accurate results I have absolutely no idea, I’ll leave that to the sociology/behavioral psychology/marketing etc people to puzzle over.

True. I didn’t, for example.

And again, since the number of people voting in these polls is just a tiny fraction of the player base, I don’t think Funcom is going to use these numbers to determine their overall strategy. The numbers can give a rough indicator of what we like, but that’s all.

I’ve been evangelizing on servers lately, and in DMs here and on PS (thank you for your indulgence, friends), that Funcom is cultivating our interests by surveying the wants of our most vocal. With any luck, and through outreach, we can get other players to sound off. Alex made it very clear as Lead that he is seeking to amplify what works for us.