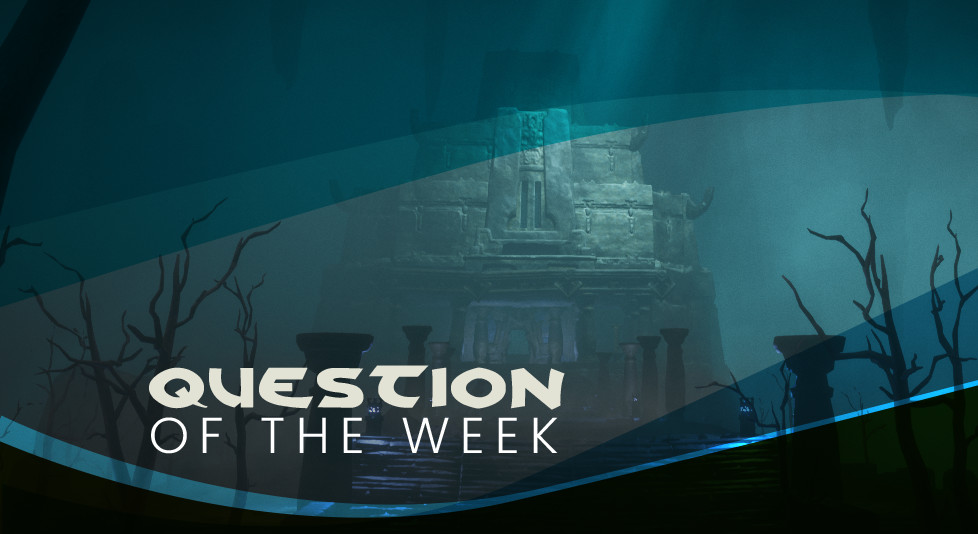 Hot off the trails of our latest QotW (What’s your favorite enemy type in Conan Exiles?) comes our next question for you all.

Ever since the launch of the game we’ve been expanding the number of dungeons present in the game, and with them the number of challenges and rewards you can find once you venture inside. The most recent one, the Wine Cellar, tells the story of a proto-Stygian culture that worshiped something better left in the past. But you can also face fishy business in the Sunken City, fight an ever-taunting undead dragon in The Arena and experience the benefits of a sauna in the Well of Skelos (but also the downsides of letting Serpentmen brutes in).

With 12 different locations to choose from, here is our Question of the Week:

What is your favorite dungeon in Conan Exiles?

) of the options above. But as usual, you won’t be able to see what other fellow Exiles have voted until you’ve submitted your choice.

Just as every week, voting is just the start of the journey. Don’t hesitate to let us know down below why you selected your choice, why the others didn’t make the cut for you and what would your ideas be for a new dungeon in the game!

Sunken city is my favourite. Not the actual sunken temples but the location around. One of the few places I like to mindlessly roam.

It would be great if there were other things/content to do in that area. I would like to see a few chests that have pearls in the loot table scattered across the exterior of the sunken temples.

you should rework black keep, re introduce traps, this dungeon desserve better that what it is actually…

I agree that the latest two dungeons are great. Definitely great enough to take themes from them and implement them into older dungeons.

I also think the emotes from the Debaucherys of Derketo are pretty rad, more fun things like that really immerse you into the game. Put some emotes in the dungeons as well? dances and stuff?

but so far it’s been awesome!

The wine cellar dungeon is an awesome layout hard bosses and really poor loot. Not much repeatability because after 4 runs you have enough steel for the armor and a weapon. No great drops so no point in going back after that.

Warmaker because the only criteria is that it actually has items that your gonna use in end-game. With 2nd best being the underwater dungeon.

Including the Wine Cellar…

The Sunken City. Swimming under the sea is just great. But I love scuba diving irl, so I may be a little bit biased.

The Sunken City, it’s breathtaking in both metaphorical and literal sense (Inserts Keanu Reeves breathtaking gif). The dungeon also has an amazing lore behind it, and everything about it is unique and very well made. It’s one of those dungeons that enriches an already amazing story/lore and adds a lovely and beautiful location to the world.

its such a toss up… cause each does something I like…

Voted for Black Keep… Its got 2 ways in, enemies about. (traps are abit miss…) and one of better Boss Fights.

Sub loves… Dregs, simple and more simple with a Boss. I wish more caves around map were more explorable and had mini-boss in it. Free Update locations are cool… there all end game stuff mostly.

Well of Skelos is wounderful, but so much of it is unused… no chest or rewards in alot of back half.
Midnight Grove, love idea… I can’t say i go here to often now. Or have I gone in last few characters.

Frost temple… I go here before lv60. (I like to get exp point, and see progress… so I rarely stay lv60 long) Could use more safe zones from cold. Or some path ways. Good overall.

Barrow King, Its design and what location is, is spot on. Nothing crazy for a barrows.

Witch Queen… its throne room, so ya… easy get in and see the queen. XD I kinda wish, after you get thru boss, there was side paths to dining hall, and servant rooms and such that could be raided for loot.

Galla Tomb… is what it is. I wasnt expecting a dungeon.

Deathwhisper ruins, (not mentioned) is actually one I thought would get a Update… Its got a good theme going in there, along with other cave near by. Basic chest and some baddies. =/

I havnt been to 2 newer ones… (i’m never lv60 for long…I restart alot, Which according to live stream, makes me one rare player)

Sunken city was great… I have to finish last few bosses.
I’ve been in silver mine, but never to deep…always forget go back.

Arena… Kinda wish there was more to do here.

The Passage is also great. and another location I wish had a few more rooms or tunnels. Specially since there small Ruin in west side.

The Dregs, 'cause I went through it with my bro @Cauthey and it was super-fun. AND even though we went in following a pair of enemies, we all fought together and gained equally. I love that about PvP in this game!

Clicked Black keep, but was hoping for more options… I prefer the arena also and the warmakers, and i really like the frozen temple… But to be honest i only do not like the burrow king (way to monotonous)

I chose the wine cellar. It’s dark, mysterious, and disorienting. The final fight is a lot of fun. It makes you stop and redirect before returning to the fight. I think one thing all the dungeons lack are a viable reason to return to them once you have enough resources to make the armor or weapons. I don’t know what the right answer is here and I commend the dev team for their efforts in working on a viable reasons to return to them. I’m just not sure you’ve found it yet. It may just be a loot table balance. I still find myself returning to the unnamed city for hard to get drops. I’m also still looking for a mace in the wine cellar.

In closing I really like the resource scatter you’ve done in both warmakers and wine cellars. Warmakers has black ice and animal resources. Wine cellar may be the best place to get gossamer and bark. Do this with future dungeons!

The Unnamed City is not listed. I chose Warmaker Hideout, as this one comes closest to it.
I keep visiting because apart from fights the loot remains interesting.

The Dregs is my least favourite, as it way too hard at the designed level level 20. It offers no desirable loot and the questline ends abruptly.

This is the hardest question so far. So many dungeons in this game are so much fun, and each of them has its own good points.

I love the Dregs for the “platformer puzzles” and relative lack of combat, but the end boss is kinda tedious.

The Warmaker’s Sanctuary has optional side-bosses (once you have the keys you can just skip right to the end boss) and some interesting stuff, such as the traps. Finding armor scraps from the side rooms is a neat addition, but there’s so little of it in the side rooms that getting some of the rusty keys isn’t worth the effort. The glowy blue side bosses are crazy-tough.

The Wine Cellar has a great atmosphere, lots of stuff to loot (the Khari steel comes in reasonable quantities), seriously tough side bosses and an interesting end boss. The darkness is a strain to my old eyes, though.

The Temple of Frost is beautiFul with a capital F. The fristies are interesting opponents - not too tough, even in numbers, but you do need to stay on your toes or turn into a popsicle.

The Palace of the Witch Queen is very interesting lore-wise, and its compact size and reasonably challenging boss fight make it easily repeatable. Unfortunately it doesn’t really reward for repetition.

The Black Keep takes its name a bit too literally, it’s often hard to see where you’re going. Silent Legion dudes in such tight spaces are a chore to fight. The end boss is badass, and worth killing over and over again if you have underlings who love good swords.

I, err, have never been to the Well of Skelos. I’ve been planning to go for some time now, but never have the time because I tend to stop to fool around on my way.

The Warmakers Sanctuary for me followed by the Midnight Grove as a very close second. The Wine Cellar came in third, but could have easily usurped first or second place if certain parameters were addressed. However, certain design choices let it down for me. Funcom when considering future dungeon development, I strongly urge that you please utilise either a strategically placed checkpoint system, or allow us to place Bedrolls in them as we can in other dungeons. Many of us within the community have limited very play time, and do not like end of dungeon bosses health points to be completely full again by the time we run back to them. If you disagree that is fine, but these are my personsal thoughts on the matter.

On a seperate note, isnt Gallamans Tomb an upcoming dungeon which is still in development, or am I confusing it with another…?

On a seperate note, isnt Gallamans Tomb an upcoming dungeon which is still in development, or am I confusing it with another…?

Well, it’s a cave, and there’s a boss crocodile which drops a piece of the Sandstorm artifact, and some smaller crocodiles and brimstone and glowy goop. Maybe someone really likes it the way it is. (I kinda didn’t count it as a dungeon in my post.)

There are several, especially of the newer dungeons,who are best. But i could not decide between warmaker and winecellar, so i voted dreggs because of best atmosphere!

Maybe someone really likes it the way it is. (I kinda didn’t count it as a dungeon in my post.)

I was hoping the back of the cave was a door to more dungeon.

Perhaps the area will be fleshed out to include more activities and the boss croc will be moved further into the depths.

Here is the source of my confusion. I could have sworn that when Funcom first announced that there were numerous new dungeons in the works 6 if i remember correctly(?), that Gallamans Tomb was slate as one. Im sure thst much like Klaels Stronghold, it was to be further expanded upon. Although please do not hold me to this.

This was a tough poll because I haven’t played any of the four newest dungeons or the Well of Skelos. I chose the Black Keep because it feels like a dungeon. Maybe some day I’ll venture into the newer ones.

It was 6 for a time, then became 5. (if I remember stream right)

they were also suppose go back and retouch the small dungeons, For abit more flare.

I think that fell thru, but Hanaumns got a elite placed inside awhile back. Progress i guess. XD