Please do, I’m confident my buttugly heap of foundations work, but I don’t play this game to make ugly buildings. So what I’m really after is if there’s any special kinds of dumb things I should avoid when trying to pretty them up.

Since this is going to be on official I waiting for my wife for back up. SI . Will let you know. e is better at fighting than

Annoying AF- now im forced to build massive complexes due to a number of reasons- thrall spacing- a solo player gets 60 to place down.

Noobs dragging WB into bases to kill thralls. Any server i start on i test the community there and leave some lowbie thralls just to see how they react.

Im trying foundation moats with two layers of fencing. Roofs get palisades. Ugly i know but whats a player to do when these people exist?

Also trees are an option as well as mountain sides

Which boss was pulled @Mikey ?also a pve server i guess?

There r ways to keep mobs out of base

There are many ways of avoiding contact with them … i had a huge croc in my backyard… never was a problem … I now have two npc camps in proximity also, they cannot acces my place at all… all a player can do is be safe at my place as the npcs , just loose aggro and run back to their places, refilling their hp!!!

Edit: my base is always open!! All players could move through my bases unbothered

They’re not… pigeons… yet.

You guys do realize that bosses can’t fly… right?..

Anything flies if you hit them hard enough. Rhinos, elephants, giant spiders, the Red Mother…

Something I just found while browsing my screenshot archive: 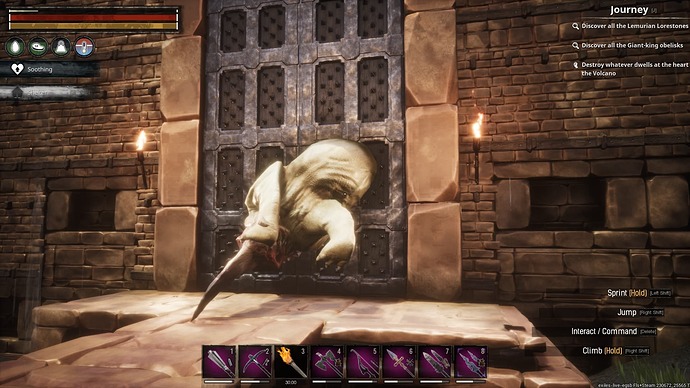 Something I just found while browsing my screenshot archive

Yea, they do that

No, thank Crom they’re not pigeons - that would’ve been scary. At least we’re only dealing with 10-foot high poisonous insect hive queens!

Srsly though, it was all about finding ways to prevent getting attacked without building a four-foundation high curtain wall. Nothing wrong with those, but I was trying to maintain some open space.

@Ragnaguard was kind enough to come online and give me some ingame pointers, so thanks a bunch for that mate!

Yea, imagine if that flew and dropped

Indeed they have increased the leash on bosses , this is why they go further than before and bosses that couldn’t reach your base before can now

Spiders are good climbers tho

That would explain it I guess. Brilliant, now Funcom is trolling us too!

Also back in the day ( way before the leash was even introduced in the first place and the TOS was a lot more blurry and the admin interventions were the exception ) people on our server reacted to a hard greifer troll that seviced for a couple month (and showed the server how deep the rabbit hole can go in terms of toxicity) by making arenas for the bosses ( wide enough for battle , flat to avoid using it to cheese the boss and pretty (themed around the bosses) … ( since the leash was introduced , the arenas went down a long time ago ) … but with the new TOS , I wouldn’t recommend this method , even if it was pretty effective

Simple and easy, please send photo of your base first, then name the world boss.
Last but not least, this is harassment my friend @Mikey and you should report the player nonetheless! I am sick and tired from these behaviors, truly. I don’t care and I don’t want to read once again this empty frase “Exile lands is not a safe place”. When a player is using a mechanism of the game to damage others in pve it is harassment, period. This is the conversation you must start and admins here should bring it for discussion and consideration on Zendesk!
Now, about your build and the boss, again please send photos and I will try to fix you a model in single player that will give you both, RP and protection!

Maybe there is currently a bug, too. I was doing serpent vault on siptah, fighting mobs in one room, the enemys in the next, still closed room, aggro and joint the fight through the closed door. I have done this dungeon realy often for arrows and altarium, never happened before.

Don’t give Funcom any new idea. Now we will get some demonic pigeon boss…

Speaking of world boss trolling- with authority spec you dont even need relichunters or dalinisia types.

I did it with a prisoner from Sep.

Any thrall you can get to 3k health will take down most WB now. War party or single.

So it really gets down to how you level your thrall and buffs.

Sorcs got it real easy though now.

Very clever Funcom, and thats a compliment because they didnt remove anything. They simply made it so if you want to run with thralls then youll need to put int he effort to help keep them alive.