Buff To Legendary Armor Pieces and weapons is needed

So we used to have war-dancer chest piece and the god eye and Brute helm, Vermin hide boots and pants…Commanders chest piece etc. but lately the new light silent legion has made them all somewhat Useless since the silent legion gives you the identical stats of gods eye and war dancer and helm BUT give sooo much more armour XDDD…however vermin hide boots and pants are still viable IF you want to sacrifice. a bunch of armor for them… The Legendary armor pieces in my opinion need a BIG BUFF either to amour value to make them be viable with the new 500+ armor value light armour combo has on exiles …or the 900+ light armor value has on siptah… which is stupid to be honest but we can discuss that topic later. the gods eye and helm of the brute and others lack the armor in their item class to make them viable and lack the attribute bonuses they should be giving since they are… Legendary items… so does some of the weapons in exiled lands and siptah as well… so let me ask …why are the legendary pieces weaker than the craftable armor? it just doesn’t make sense and needs to be looked into to improve the legendary grind a bit more and make it more rewarding again for instance the vaulting pole and the black dragon pike both need buffs. Vaulting pole needs either a damage buff or Pen buff since it classes with some of the WEAK weapons now which should not be the case. now the Mordlun is also arguably considered a close-to-weak spear now as well since the craft able tridents etc. the only weapon that has stood the test of time in the legendary category really is yog’s touch… all others are just not worth farming because they give no advantages to gaining them…aside from the Dagger and claws meta weapons which we have a topic for already… so ima ask the community and see how they feel about it. lets discuss below! PvP topic guys. lets be respectful of others opinions. THIS IS NOT A NERF Suggestion but instead a Buff suggestion… although aspect of the demon in siptah is kinda … in the Nerf category or inspect please category we will remain focused on the buff the legendries here please and thank you for the read and your opnions as long as theyre not toxic or demeaning to others is wanted here

TOPIC FOR DAGGERS AND CLAWS FORUM HERE: NEED TO NERF the Siptah Claws and slight nerf Daggers or bleed in pvp and other things

i stand with u. yes most of legendaries need a buff (in my opinion to be a bit better than any crafted armour. not a lot, just a little bit better , so u will get better rewarded for the time u will invest to get the piece.
now that is a trhead i would love to see… well said m8! +1 from me

I also believe they should Buff Hammers to their old animations, as they are now theyre too slow and not really viable unless in tight spaces etc. but i get they have a place in the game right now but the old school hammer can compete with a spear EASY and make it more fun to have different builds fighting. i still want a buff to the spears as well, they just dont feel like a main weapon anymore but a chase weapon or when someone is low you try to chase them out and hit em with reach etc … just thing spears are abit underpowered in this current model of the game. what do you think?

Go right ahead and buff them, but also introduce them to siptah. I miss my God Eye and wardancer there.

why are the legendary pieces weaker than the craftable armor?

I’ll dare to be optimistic and say that it might be that Funcom has heard the voice of those among us who are sick of endless RNG slot-machine grind.

Obsessively grinding the same content over and over again just to get that one piece you want might be fun for some people, and that’s cool. If you want to do it because it’s fun, go right ahead. But don’t force the rest of us to do it. Don’t make it so that people don’t stand a chance if they don’t like slot machines.

So yeah, I’m not against buffing legendary items, but I am vehemently against making them better than the craftable items. What would be nice is if they gave the legendary items some kind of unique trait that doesn’t offer a huge advantage in combat situations.

There are several legendary items that I like despite their relative weakness when compared to others of their kind. For example, I like the Festering One, because it’s useful in PVE against flesh-and-blood bosses and large critters. I can use the venom-infused daggers to stack up max bleed and poison and then keep it going with the Festering One. I also like Glimmermoon and Forgelight, because they help me out at night. I absolutely love Lovetap, even though its concussive power is weaker than a steel truncheon, because it has the mace moveset and allows me to deal with human NPC groups more efficiently.

You wanted to know how people feel about this, and this is how I feel: keep craftable weapons better than legendaries for PVP, and make legendaries better for PVE.

I disagree to an extent and here is why, i may come off aggressive but please know i dont intent too!

The items are LEGENDARY they are meant to be better. if you want to keep teh slot machine stuff down in a Survival game then idk what to tell you since almost all survival games operate on this level… the legendary items need to be better or they have no use or people wont grind for them which removes part of the game that makes PvP happen more often and more fun. The unique characteristic that made the items good was the bonus attributes etc BUT now they dont have that since the crafted armor gets the same bonus’ with more armor making those pieces of LEGENDARY armor useless in pvp terms. you will be laughed off any official pvp server for using them after someone 2 or 3 taps you with a yog or kills you with dagon daggers… because the armor doesn’t scale well at all. Maybe make armor pieces also drop from the skeleton key chests as well so it is less slot machine like? but still again that is apart of a survival game. and they need to buff the legendary armors and reward players who are like me and farm for those types of things to gain an edge in combat… which is how it should be… it doesnt just give me the win because i have the gear but it gives me more comfortability within a build i want to run to perform the best of my abilities and how i like to play…I am eager for your response since this is a big topic i been wanting to talk about for awhile since i at one time used each piece of legendary armour at some point and they are now Useless in regards to pvp or anything… which shouldnt be the case

i may come off aggressive but please know i dont intent too!

The items are LEGENDARY they are meant to be better.

Sure, and what I’m proposing is to make them better for PVE. Look, “legendary” simply means that there are legends about it. To put it humorously, just because Ron Jeremy is a “legend of pоrn”, doesn’t mean everyone should be lining up to stick his penis inside them

You might be confusing survival games with MMO games here. Survival games require survival mechanics, i.e. crafting, hunger management, hunting for shelter and resources, etc. Slot-machine mechanics are the hallmark of MMOs. There are lots of us playing Conan Exiles who would not have even bought it in the first place if it had been marketed as an MMO, instead of a survival sandbox.

So if you want me to spend time grinding the same boss over and over again instead of focusing on my survival, then I don’t know what to tell you

The unique characteristic that made the items good was the bonus attributes etc BUT now they dont have that since the crafted armor gets the same bonus’ with more armor making those pieces of LEGENDARY armor useless in pvp terms.

I disagree. I’m not saying you shouldn’t be rewarded for farming, I’m just saying that the reward shouldn’t be gaining a significant combat advantage. There are many kinds of rewards. Let’s bring back some of that creativity that made this game so awesome and stop focusing only on a handful of numbers.

I agree. They definitely shouldn’t be useless. Hell, that’s what still bothers me about the LBS nerf, even though that’s ancient history by now. They turned it into a paperweight, and I never got over it.

So that’s the common ground the two of us can find: buff up legendary items to be on par with the craftables. As for the rest, I imagine we’ll probably end up agreeing to disagree

What if legendaries we get as random drops could be delved. And have the crafting cost require eldarium or star metal and a fragment of power to craft. That way they wouldn’t have to be buffed or finagled with too much and they would benefit from t4 crafters?

That would be cool haha

Like I said, we’re probably not going to agree on how to make them unique or better. But at least we could find some common ground

I like this idea. So you don’t have to grind them over and over and they don’t need to touch the stats of the armors\weapons, since the armorers/smiths make them better already.

I don’t necessarily want legendary items to be more powerful. But I do want them to be more exiting with interesting and varied visual effects, and interesting rare effects when a legendary weapon hits (like frost bow slowing down attack speed, or splinter causing a small aoe).

I miss my God Eye

I’ve picked up two from the Red Mother in the south biome on IoS.

So the new pirate outfit (its supposedly cloth and leather) has the best heavy armor stats in the game, and each piece gives plus vitality. I compared it to all of my heavy armor made with the + armor thrall and the added armor perk and it is the same.
You can now be a tanking pirate with high vitality. . .

You can now be a tanking pirate with high vitality. . .

If you consider it to be authentic pirate garbage… (not my words autocorrect) *garb. Must have been the same thing that happened to the pirate armor. Preston, Pirate, easy mixup.

Well considering we already had real pirate garb in Exiles, even wooden legs and eye patches, this looks like the upper crust pirate garb, only worn by the best pirates. 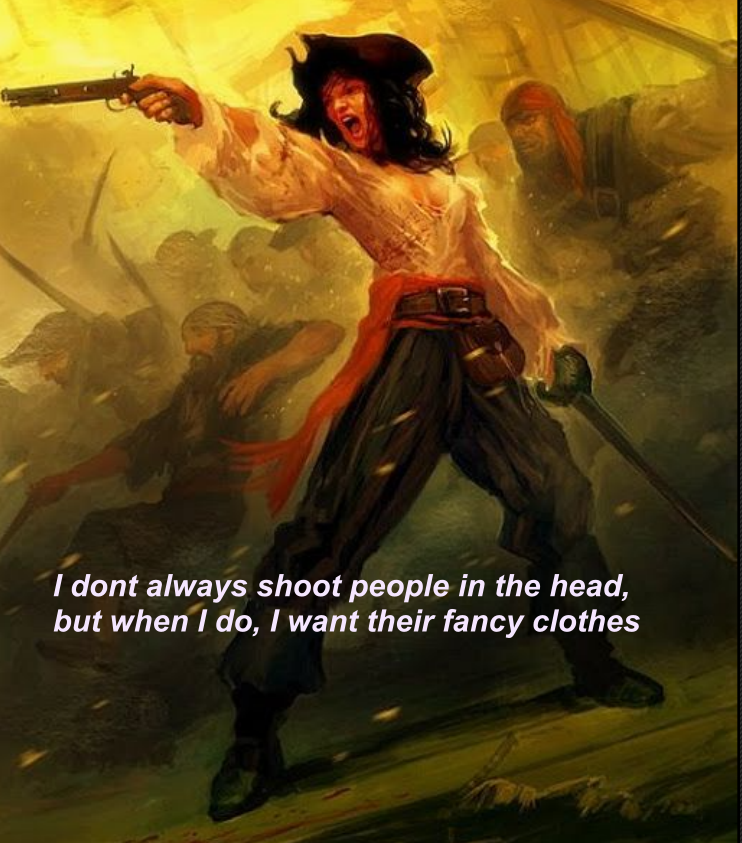