Half my base lost Stability after game froze

Half my base became unstable after a crash. I was constructing a new building in my base and climbed some stairs. I wasn’t placing anything in the build menu at the time. The game froze and was unresponsive. After some time I restarted the game. There was no error to report. Sometimes freezes will cause a CE-38 something error and I report those. Sometimes it doesn’t. I opened the game back up and half my base was gone. All pieces in the structures I just built and ones that have existed since choosing this location lost stability. Some structures were still standing so it wasn’t entirely lost. I checked the event logs and it was full of pieces losing stability as soon as the game loaded or server started. Thralls and war banners were floating in mid air where they were positioned in the now missing structure. Thankfully I backed up my save last night so I only lost an hour of work. I can post screenshots of my base before and after if needed and the event logs after the crash and after reloading my save. I’ve deleted the game and I am re-installing it now. I rebuilt my PS database 2 days ago. My Playstation has nothing blocking air flow and doesn’t feel hot.

I have a ton of stuff in my base and I’m sure it’s stressing out my Playstation and causing it to crash. My question is, what can I do to minimize crashes? Actually I can handle the crashes. I should say what can I do to minimize the chance of my base becoming unstable randomly. I’ve taken out 100+ lights. That’s about half of the lights. Do I need to get rid of all of them? I haven’t even begun to decorate.

I even go as far as leaving my base to access the Admin Panel as it’ll crash if I access it in base after playing for about an hour.

Hello @Ghawor, please note that the singleplayer client has trouble handling the same load as the online client, especially on console.

When dealing with crashes related to the system being under too much stress we advise you to reduce the number of light sources to a minimum, as well as keeping the number of NPCs and placeables in check, if possible, as the crashes are in many cases caused by high amounts of placeables and lights in the same area.

Additionally, could you please provide a few screenshots of your base and the surrounding area, and let us know which PS4 model you’re using, the type of disk your game is installed to (HDD/SSD) and whether you have similar performance issues while playing online?

I have a standard Playstation (not Slim or Pro) with a 1 TB HDD. Model CHU-2015B. I’ll make sure to reduce lighting and some plants. I hope the PS5 will be backwards compatible because I really want to decorate and continue to build big😅.

Here’s the screenshots of the instability issue after the crash: 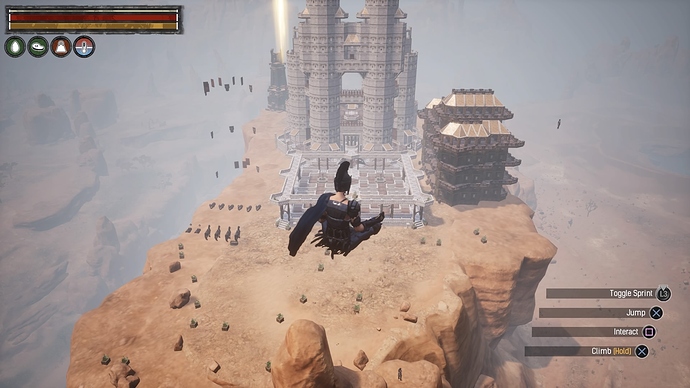 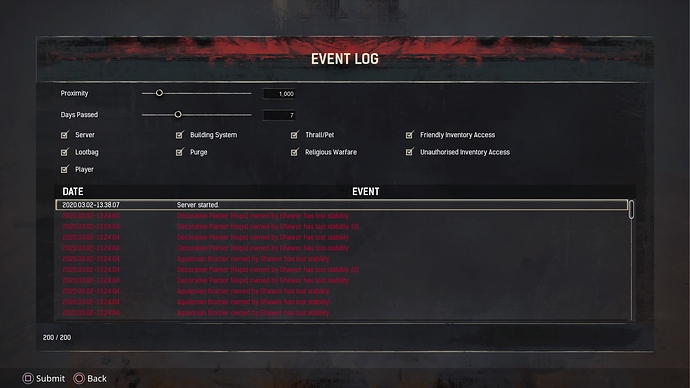 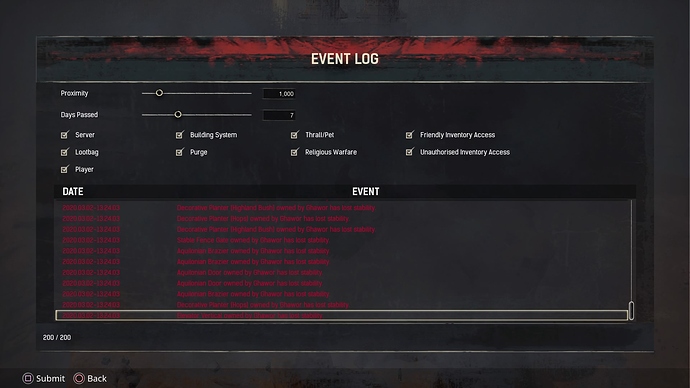 Here’s the screenshots of the base after reloading a save: 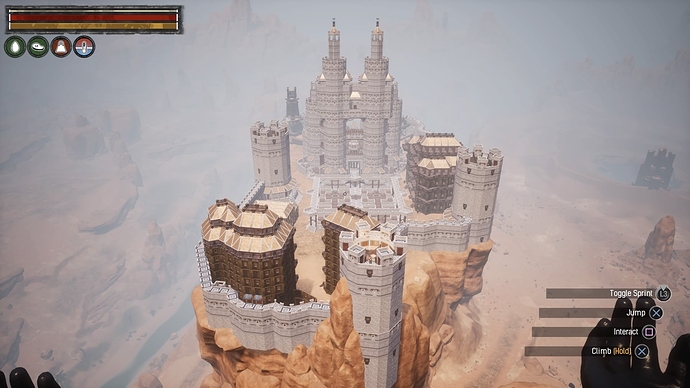 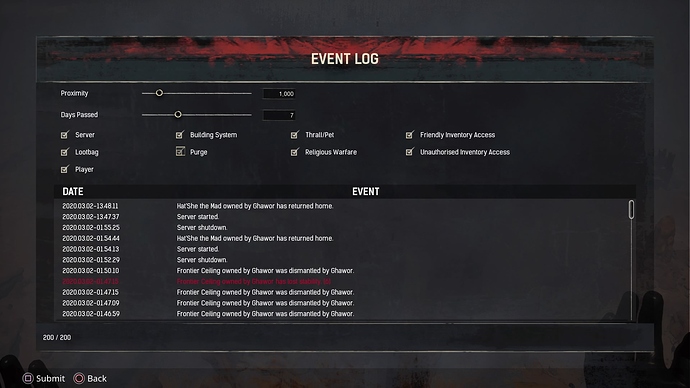 Do the type of lights matter? I’m thinking they don’t. Just the amount of lights right?

As an example, in one house I had 5 lights on 4 floors. 20 total. They were the hanging Aquilonian Braziers. I was messing around and put a Stygian Brazier on top of a pillar in the middle of the floor and just 1 lit up 2 floors. So now I have 2 lights for that whole house instead of 20. I take it replacing my lights like this all over will reduce the load? Or is it based on more than just the amount of light sources?

@Ghawor from what I have experienced replacing flickering light sources the blue torches or radium torches causes less problems. Remember the blue ones cool you off.

I thought that might be the case. I’ll go with the non flickering lights then. Thanks for the advice.

I have a standard Playstation (not Slim or Pro) with a 1 TB HDD. Model CHU-2015B. I’ll make sure to reduce lighting and some plants. I hope the PS5 will be backwards compatible because I really want to decorate and continue to build big😅.

Thank you for sharing this information with us, we’ll relay it to our team.

Do the type of lights matter? I’m thinking they don’t. Just the amount of lights right?

The quantity of light sources has the largest impact, although the type also has some.

Just an update. I got rid of about 4/5ths of my lights and reduced a bunch of placeables and the game is running pretty smooth now. But I had the same thing happen again. I was rebuilding the same structure I was building when my game crashed and structures lost stability a few days ago. It was in the same spot and rebuilt after reducing placeables and lighting. I built the outer walls and floors only. I didn’t crash and exited to the main menu without crashing as well. I then started to add walls and stairs in the interior. I again didn’t crash and exited without crashing. When I opened the game back up, the same structures lost stability again. The exact same ones as before. Banners and thralls still in the air. I’m thinking it must be from building in a particular spot and height that causes this. I uploaded a save after reducing my lights and placeables. I’ve reloaded that save and changed the design and built an archery range that’s only 1 tile high. I haven’t had any problems since then. Here’s some screenshots of the area. The area is in G6 on the map. 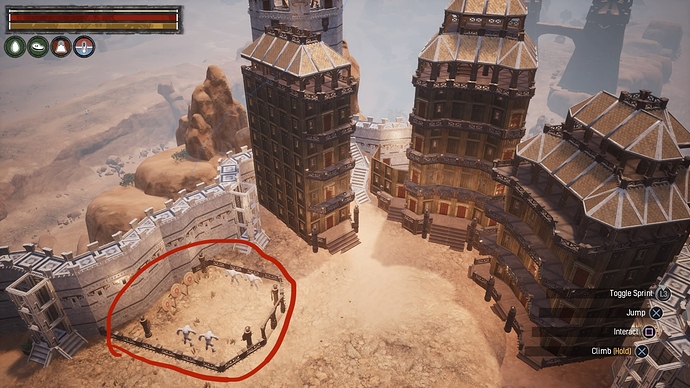 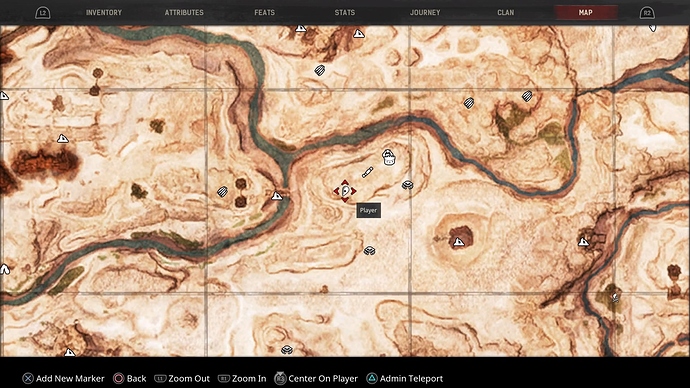 If the lights are the problem, will that ever be fixed? Even just a few lights make my PS4 (slim) go nuts, and my base size is like…2% of the one from the OP here. I also like placing stuff everywhere, maybe I shouldn’t? Offline single player too.

From my experience, lights, placeables and thralls all significantly impact how smooth the game runs. Placeables and lights with animations like the small awnings and most braziers have even more of an impact. Walls, ceilings, foundations, and pillars don’t seem to stress your system as much but still count. Render distance also plays a big part if you’re building near a previous structure you’ve built. If I build close enough to my main base where it’s even partially rendered in and I can see it, then things run really slowly. But if I build in a location where I can’t see any of my main base, everything is smooth like I’m building for the first time.

As for fixing the issues, I don’t think the devs can do much. Having a PS4 and PS4 Slim, we are limited by our systems. We don’t have good enough hardware to support lots of placeables. You can upgrade your hard drive to a solid state drive and that will help with all games, but I think the only real solution is to upgrade to a PS4 Pro and get an SSD or wait for the PS5 (given it’s backwards compatible). I’m going to start building smaller and just wait for the PS5. Hope that helps.

I ordered an external fan for my PS4, one that you stick on the back of the console and it sends more cool air inside. Not sure this will make a difference, but worth a try.

@Alhambra I put a external fan on my 1st backwards compatible ps3 600 dollars filled full of dust and dirt and died. If you do a fan filter it. The unit I used had 5 fans. Intake and exhaust . Didn’t know about taking them apart and cleaning them then.

Oh let me know if the external PS4 fan works for you. I was looking at getting one but never pulled the trigger.

I just received mine today. After seeing what you posted I almost don’t want to use it now

Oh haha well where mine is now it’s definitely a tripping hazard. I can’t leave it out when friends are over unless we are gaming.

I basically just pulled it out from media centre onto table. Cables still run through media centre. So I have a table out in the walkway in front of tv.

Not a long term solution

Hopefully you can provide some good news on external fan plan

Well if you can filter it would be nice. I vacuumed mine and blew out with air from compressor but you could use canned air for PC. Witch reminds me need to clean my wife’s and my ps4. We have cats furry critters.

As I understand, the fan sucks hot air out of the console, rather then blowing air in…I’m about to go give it a whirl.

Get it? A whirl? Aaahahahah…erm.

Well let you know how it goes.

Alright fair winds and cool breezes. Let me know how it works out.

Hmm…hard to say. It makes a lot of noise, not bother by it, but it drowns out the PS4’s internal fan, so it is hard to tell if it’s helping…so I went into my base where I know the fan goes crazy, waited a bit then turned off the external fan, and the internal fan was actually pretty quiet. It got going maybe ten seconds after turning off the external one. Sooo…I have to say it does help to keep the PS4 cool
What I DON’T like is how much vibration it creates on the PS4.

Otherwise everything seems fine. The game still hiccups and lags, especially in base but I wasn’t expecting that to stop. I just don’t want my console to overheat.
@Cannipals
When in the game does your fan kick in a lot?

I don’t recall how often it used to come in for conan and other games. I just know it was very annoying. For me though I think it was more where it was in the media centre. Not great air flow there where it was. Would get very warm in its little cubby

Once I brought it out to that table in front it’s not nearly as much. But that’s why I was looking at a fan of some sort so that I could put it back.
Maybe it’s more a fan I need just to add air flow in the cubby