After a Server restart, Our base disappeared. With a Look into the eventlog, I saw, that all foundations, Walls, chests and so on lost the stability and were destroyed. Also, an older Backup doesn’t help, too. When somone reaches the base, everything is destroyed. Only thralls and some decoratives are floating in the air.

I can’t post pictures, because, I’m a New member, but the first entries are:

When somone reaches the base, everything is destroyed.

Hmm, just wondering if you know that you have to be in the vicinity of the base or structure in order for the timer to be reset. If you log on even every day, but are too far from the base it will decay just as if you had not logged on at all.

I was there every day. And I restored an older backup when the base was still ok and there was the same problem. Especially I’m Sure that I’ve deactivated the building decay.

But on Facebook I’m not alone, it seems to be that many people have the same problem, but I didn’t saw a bugreport here in the forum (except only for chests) to draw attention to funcom. (it seems to be the only way to report Bugs to funcom)

I am having the same issue, it has happened three times.

Occurance one: Event base on Siptah 12/21
Server: Ghosts of Siptah
After a server reboot, the entire base just disappeared, items hovering in the air.

Occurance two: Event base on Exile Land 12/22
Server: Ghosts of Sand
After a server reboot, the entire base just disappeared, items hovering in the air.

Occurance three: Players clan base in Exile land on 1/6
Server: Ghosts of Sand
After a server reboot, the enitre base disappeared, items hovering in the air.

The third time, the clan was online and was participating in an event. Building decay is disabled on both Ghosts of Sand and Ghosts of Siptah. 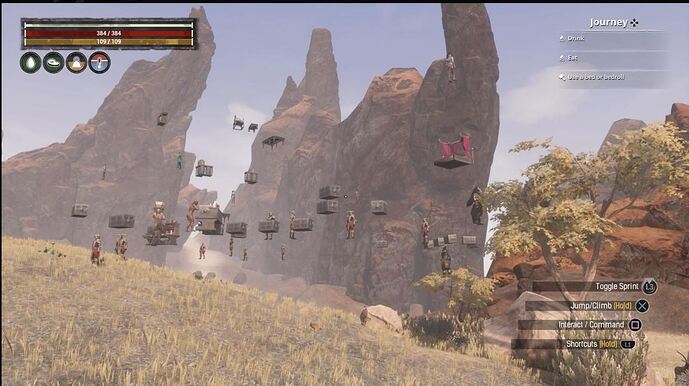 Is there an official dev thread where this issue is acknowledged? It’s incredibly frustrating to have entire bases disappear after a server reboot.

Event logs for all three are the same. There are no building pieces that are blown up, nobody is doing damage, it just shows all the decorations, doors, etc losing stability. No foundations, walls, or other building pieces are in the event log. 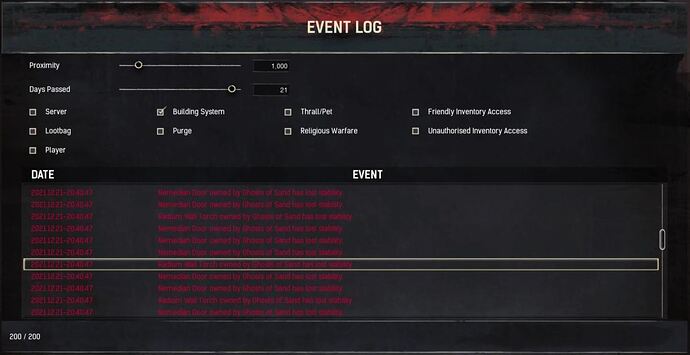 This is a small portion of the event logs of what lost stability today. No walls, foundations, roofs, etc. Only decoration and doors. 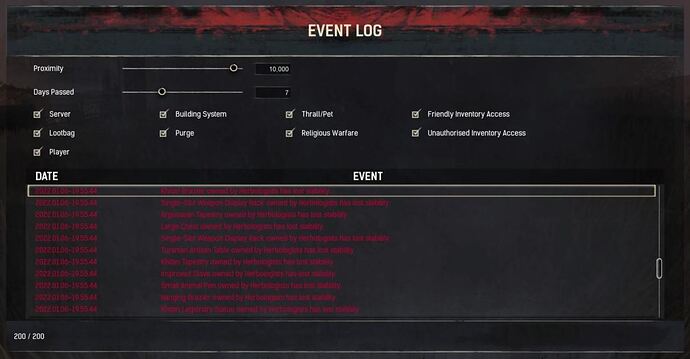 I have had the same issue happen twice now in Single Player/Co-Op. It seems to happen to me only in the Northern Volcano area as far as I am aware. All my other bases are intact.

I researched as much as I could and noticed here (https://devtrackers.gg/conan-exiles/p/dd0d71ec-buildings-pieces-losing-stability-after-update-2-4-6) it was possible to turn off the Building Validation Feature to prevent this from happening.
“We’ve disabled the following setting ‘dw.DisableBuildingValidation’. This has been set to 1 by default for now, as private server ad…”

Is disabling building validation something you can do for Console players? Perhaps at a later date give a toggle in the menu so we have that option such as the decay option? It would be greatly appreciated so there isn’t a possibility of this happening again as some bug in the building validation seems to be the culprit.

I currently have a slightly older backup of my 2nd version of this base intact after rebuilding it after this happened once before. As before, I left the area to get some more building materials and when I approached it just started deleting(losing stability) in front of my eyes as it did the first time.

I have put a lot of work in to this newer build with the dungeons and mazes beneath the main raised floor. It is quite intricate and uses a lot of pieces. After getting everything just right which was a lot of work and seeing it just start vanishing it really hurt. I now am timid of leaving the area or even playing the game at all until this is addressed.

I love the game, however this puts a real damper on playing. I lost a lot of work I did from the first as well as a lot more work on the second that wasn’t in the older backup I had on the cloud. I have it saved, backed up to the cloud as well as a USB Drive with the game dormant until a fix is enacted.

The only thing I can tell is that the entire base lost stability all at once and it had many foundations and stability was checked repeatedly throughout the building process. Decay has been turned off as well as building damage. No one was on at the time to even attempt attacking and we are all on the same team anyway.

You have built such an amazing game with so many excellent options to build and are always adding more. Exiles has become one of my all time favorite games. It is disheartening I haven’t been able to play for so long out of fear of losing many days of work right in front of my eyes. We had a weekly game night playing Exiles before this started happening and would love to be able to resume. I feel for others experiencing this, more so for ones that don’t have any sort of valid backup.

I am sure you guys have a lot on your plate with all the great content you are working on, but I hope you can take some time soon to address this.

Thank you for your time.

Thank you for the report, everyone. We’re really sorry for the inconvenience. This is an issue we are aware of and we’re working on a fix.

Please let us know if you encounter any other issues.

This just happened to me too! I just signed up to say something. I have to no idea how to upload any sort of previous saves. I don’t think I have it in my to start over!!

Same occurred with my friend and I. A few weeks ago, my friend lost his base. And last week was my turn. Both bases were very huge. Everything I farmed after 2 years playing in a private PVE-C server was gone.

What @genaro said about the problem occurs after 12 thousand construction peaces in place can be important!

I just lost everything too when I opened my server 3 days ago… loss of stability dismantled the structure totally. I contacted Gportal who told me that it came from Funcom, so I sent an email to Funcom. I hope they will be able to help me otherwise I’ll stop my server.