Here’s my suggestion for how I would like to see things changed:

It should also be impossible to place foundations in the center of the roads or rivers. You should be able to build on the edges of them or build bridges over them, but should shouldn’t be able to completely wall them off, especially right outside of the newbie spawn point. You could have a base over a river with a bit of the water encased in your walls, but there would always be a place in the center for people to walk or drag thralls and continue on their way.

Reasons why this would be an improvement:

Everyone (except griefers) wins!

What if at least for rivers instead of denying the ability to build foundations in rivers entirely just have a stability/decay penalty for doing so? As for roads being no build zones perhaps just have a special NPC caravans that clear out anything that blocks their designated path? Dragon caravans perhaps?

Perhaps have a “lay line” system incorporated into the purge system… (Where you get purged more for blocking off the “lay lines” that are there to provide paths to and from established points of interests?)

I’m not so enthusiastic about not being able to build where I want but I do like the idea of there being some consequence to blatantly blocking the way, likely in the form of NPCs breaking through said blockages…(At least on PvE… On PvP it should be possible to clear blockages by simply destroying the offending wall…)

How does this feature work currently?

So i don’t mind river building. But points of interest or obiliks or key game elements on PVE C and pve should be unlockable and unbuildable locations

I think you should still be able to place small camp fires, wooden chests, and bedrolls (but no walls or foundations) on claimed land (including semi-near key elements), but they should have an expiration timer (even on servers that don’t normally have decay). The land owners should also be able to dismantle them if they choose to do so and find them before the timer runs out.

Being able to place them would make sense and let you use them as a short-term checkpoint, while also removing their potential for griefing.

If it isn’t fixed, I am one of those people who is likely to rage quit. I will just pop into single player, turn on god mode, grab the trophies, and then uninstall the game.

I don’t mind putting in the grind to progress, but I can’t stand having that progress arbitrarily destroyed.

You just said you had to move your base twice because of boss placements. That is an issue.

I don’t understand it but at the same time I do. But what your saying from my point of view is weird landclaims I have done in the past have a wide claim in all directions. I can see this being useful but it should also be a server setting to adjust the landclaims appropriately or based of host/player preferences. I also think that if it’s official server this is on that there should be a small unclaimable portion of land shortly after hour claim ends that way it’s not a complete box-in it’s why I love my hosts server PVP/e building damage is on between 3pm-7pm EST on weekends and 1 hour on weekdays from 5-6pm makes life easy to fight back though I wish tools could do appropriate damage to dig my way threw some structure someone built that impedes my progress.

The purpose of this idea is good, the suggestion itself… sorry I doubt it.

The real problem in blocked servers is other players are paying no attention. On the official server where we play there was blocks and this kind of unfair things. For the ones who was impossible to speak with because they wanted to be trolls (most of them in reality just understood how stupid it was what they’re doing after a friendly speech), our solution was to counterblock the blockers, making wars using unfair methods against them, and finally when they left the server replace their blocks with arcs to claim the passages and being sures they’ll stay open for all players forever (or at least until we’ll be there).

Now there isn’t blockable (important) sites on the official server where we play. Sure it required months, but the game is survive, build, dominate, that’s our idea of dominance.

Anyway I think the real problem is not the path-blocks, but the building on important spawning points (bosses, t4 thralls, rare resources and so on).

So I think a boss spawn point has to be unclamable land for more than 8 foundation radius, and so the places where thrall spawns have to be too (for example I can’t build in a darfari’s village and that’s ok, why I can build on Terrace of the Tenders !?)

I disagree to the boss issue I relocated the world boss demonic spider or despawned to acquire my ideal base area I believe if a boss spawn is claimed the boss should have alternate spawn spots ot just camp out nearby as I have had the demonic spider as a roommate for about a week then he chases me down ledge and never seemed to return back even though I didn’t build near him and kept my distance obviously he never came back but I saw him or another demonic spider innate different location closer to the spider nest near to the abyssal. Though the water traps and mechanisms was glitchy. Not sure if it was related or not.

No, I am suggesting making it impossible to build in the very center of the rivers, and I am only talking about up to 2 spaces high. In the first post I even specifically point out that I think you should be able to build bridges over them.

Basically, place a foundation, place a second foundation to the side of it, then place one foundation of top of each of those. Now image a line of that size going down the center of the roads and rivers.

That is the size I am suggesting should unbuildable, and as long as your bridge is 2 foundations high across that section, you would still be able to build over it.

Now I understand and yeah, it could be a good thing to have it, at least in certain points of the map

I think it’s an issue because that reasons:

You are clearly new to this game as building jump towers has been around 2017 and still is a thing to this day - and current claim radius is way more then 3 blocks. This is why on any somewhat alive PvP server huge swaths of land around player bases are simply walled off and look like this 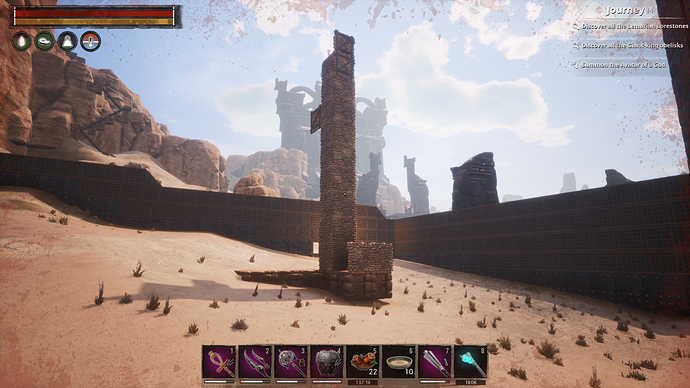 It looks ugly and serves no other purpose other then defeating jump towers.

Well obviously you could answer that statement with the same logic relocate the chest too, honestly why In the world was the demonic spider actually so close to the black hand ship to begin with as its not logical it would make more sense to be located within the spider area, now I realize that it could be a issue then the simplest way of fixing that is demon spider belongs over my the spiders with all the spiders instead of relocation of them and him make them permanent spawning spots I can tell you just living near the demonic spider was a issue in it’s own right having all the spiders swarming.

HIM ALONE would make living near him permanently actually less benefiting considerably because thralls can die EASILY to him and with spiders randomly spawning upkeep of pets and thralls plus up keep of all other things and if thralls are not instantaneous spawned I see no way I could have made this work. Even with a clan of 20 would still be a issue because well just the obviously. This is a easily solution to fix it’s just the problem of coding and getting it done.

But that’s the point, in that case it’s your land, your resources, on an official server it’s not.

There are no admins, so you have to defend (if you care) the freedom of all important resources for all players, to prevent the server becoming an awful place full of blocks, resource missing etc. where no one will want to play.

So you HAVE to guess the worst case when you can’t know the truth.

I don’t think you’re a bad guy wanting to ruin the game for others, obviously you just think that spot is perfect for a base.

But the area you’re talking about is between 2 world bosses (the one you’re speaking about and the one on the hill just in front of it) with their chests, a miniboss, the only brimstone deposit “en plan air” of the desert without entering a cave to mine it, and the treasure chest (gold/silver) notes of the black hand are talking about.

So on PvE and PvE-Conflict servers you building there will lead you to find peoples on your doors asking you to stop and change your base’s position (usually offering to give you the resources to rebuild) or to suffer a war guessing you’re a troll.

Honestly I was one of this people speaking with new players on the server where I play so many times. And I have funnier things to do than that. I understand why FunCom can’t provide us admins for official servers, so the issue is: at least prevent players from building in that places.

The map offers so many other good spots for bases. Why all of other people have to see a boss changes its position just for ONE player/clan ?

+1 for the caravan idea… or anything working this way…

Just to be clear, I play on an official PvE server.

With that caravan / lay line pattern in mind, what if the paths can still be built on and the only way to keep those built structures there is to build them anew after some event passes.

So a timed event happens first, somehow erases the structures or damages them to a point of ruin, then there’s a timeframe in which the ruined pieces can’t be repaired for a reason and once it closes the pieces will fall apart, but new pieces can be built to occupy the space.

As a parallel event, an interesting scheme is put into motion somewhere else to deviate attention of those who reside in these paths to drag them away possibly. So if there are still structures in place, this would at least give a chance that the owner, or clan as a whole, isn’t present.

Perhaps if the caravan can find a way from point A to point B without the route experiencing long delays then it leaves stuff be. Only when it would have to reroute for a long period (>50% increase to travel time) or encounters a complete blockade would they attack. This would then still allow people to build along those paths without necessarily risking destruction if there is still a reasonable way thru the territory.