I love wealth and all things mercantile in open world games, and I also love to buy in-game items. I genuinely feel that Sepermeru’s marketplace could benefit from a handful of additional Merchants. I do not mind what they are personally, I would just like to have more trading than we currently do, and more uses for our hard earned in-game currency. But while I am here I may as well offer a few starter suggestions for additional Merchants.

-Butcher: sells meats eg-savoury or feral flesh
-Baker: sells bread, and perhaps pie
-Milkman: sells goats milk, has a couple of goats by him
-Trinkets: sells unique placeable which cannot otherwise be crafted
-Building Supplies: sells stone, wood, etc
-Produce: sells some fresh fruits and/or vegetables
-Jeweller: sells unique jewellery items which cannot otherwise be crafted
-Barber: I know this one works a bit differently, but we have all been asking for it. Sells a change to hair/beard style

It doesnt have to be these things specifically. I am just floating some ideas. Feel free to propose some of your own too. Would anyone else like some additional Merchants?

I’m all for this.
More merchants, a true economy system … this game has so much potential.

This and significantly improved Thrall / settlement AI and I’ll be a pig in &$#@. I really love the idea of non craftable jewellery and trinkets.

A second round of thanks RichardDelta93. This is one one my two deepest wishes for this game; a true economy system as you said. I remember when it came to Skyrim I was such a profit driven person! Even when I had more money than I could ever possibly spend, I just had to keep collecting and selling. I love growing wealthy through trading. As you said there is so much potential in this department. Someday I soooo hope…

However, in the meantime, Im happy to simply have a few more shopping options, ie-Merchants to tie me me over. Things like a Butcher which almost any town or city like Sepermeru would have but doesnt. Of course I could just get them myself quite easily by killing an animal. But its about building immersion, and making the city feel more alive. And also making our money feel more valuable too. Because at the moment it feels like our coins are more useful as a crafting material than an actual form of valuable currency and symbol of wealth. To make a case in point, I have friends who when looting enemies will leave gold and silver coins on defeated enemies to take their stone or wood! This is counter intuitive to real life and how I feel it should be.

Hi Crix and welcome to the community! Spoken like a true prodigy. No I am serious, no sarcasm intended. The Settlement System and AI are two things I am dying to see unearthed. We have precious few details as to what it will be at this point, but I cant wait. Yeah I like the idea of buying some unique items too, it encourages the player to a) save money and b) shop more. Which also ultimately contributes to longevity. Instead of simply looting the item from a defeated enemy all of the time or reading a recipe, it adds a different means of ‘unlocking’ the item. As with say the Heart of the Sands or Sword of N’Ruka; collect x amount of A and then take it to B to obtain C. They are additional tasks to keep us amused, and it excites us when we know we can afford it. The same formula applies with the Trinkets/Ornaments merchant, it makes the placeable become a trophy of sorts, and shows work and dedication when displayed. Trade in x amount of this to obtain an otherwise unobtainable and unique looking snake idol, or small statue (just examples). And dont worry, I would be as happy as a pig in just that too!

And again I find your idea more than good.
Super would be synonymous if the slave market is reopened in CE and you can look at different slave there.
I would also like it if I could whip my miserable slaves.

and maybe a dungeon where reward will be to see a master merchant selling legendaries (at the right cost) , like weapons, armours, scrolls and kits …
so we can either aquire them by harvesting the normal way or by paying a price, and by paying an increased price (and yes id love it to be a hard price to get any legendary) , i could choose exactly what i will trade for …

Thanks for the support GodsOfExiles. Yeah I actually thought of adding a Slave Trader to my list of potential new Merchants, but thought I will wait and see how well recieved the suggestion is first. It could function similarly to the hired hands at Flotsam.

PS- I have often thought that when placed on the Wheel of Pain, Taskmasters should play a whipping animation.

That sounds like a lot of fun Ragnaguard. Honestly even if the price was very high (which considering the risks involved for a denizen of the Exiled Lands to obtain one it probably should be), I would work towards it. And it would do exactly what I am angling for here too, well two things actually. 1) Is encourage more trading by the player/character 2) Provide a different and unique means of obtaining otherwise unobtainable items.

I’m all for this idea, I’d love to see a real economy system in this game.

The barber seems like a no brainer- there’s no reason we shouldn’t be able to customize and change our appearance.

The jeweler and trinket merchant are great ideas as well. Give me all the fancy things. It might be cool if whatever is available to buy changes with the seasons, you could get Halloween themed decor/jewelry in October, or maybe a Christmas tree or other holiday items in December. It could be a cool way to implement event like items in the game, which could be more or less rare depending on when you’re playing or how long the server has been running. I like the idea of having rare commodities in the game that you really have to search/work for, or trade with other players to get.

I think we’d also need a way to make our own merchant workstations, so we can buy/trade our own goods.

In addition, if a better economy system were to be added, I’d like a way to display all of my wealth. Placeable overflowing chests of gold and silver, stacks of gold bars, ect. I’d love to be able to build a real treasury, with all of my wealth on display.

And maybe an option to SELL thralls:

that would be awesome (and would open up the hunting season for Cannibal Brutes ahah), I know that could be hard to implement tho: CE hasn’t any “market” interface so that we have each merchant sell 1 product instead of many. But I’m sure we will have it, some day … maybe after Mounts

EDIT:
there could be Spice Merchants in the East, near the flotsam, which would sell Spices and Rare Spices for reasonable prices (like 10 rare spices for 1 silver coin), maybe with a chance of re-selling them in Sepermeru … would be awesome ahah

also, rare spices are good cause they allow you to craft non-decaying food, so they act as preservers and this makes them really useful.

Selling Thralls sounds funny (slave market) but I think then you would lose the fun of mining resources.

I am already very rich in CE, I would rather spend my money.

I have 1000 gold coins, 1000 silver coins and I do not want to start with my gold and silver bars.
But I will post a picture of it here. After the work is done.

there is a mine, south of sepermeru. I go there quite often (usually once per day): if you complete the dungeon (you don’t need to kill the bosses), you can get up to 250 silver ore (I use hardened steel pick with advanced tool kit).

Currently I have more than 3000 silver coins and more than 1300 silver bars. I don’t have much gold, but I plan to explore the volcano soon.

Also you can find a lot of chest in the Unnamed City (4 in the Citadels, 5 near the Red Mother, and others near Relic Hunters) and across the map (Priestking Tomb in the West, Sunken City in the East)

I see … I have to say that the only opponents you have to fight are small and medium scorpions (giant and queen can be skipped) so it should be available for low level players too. 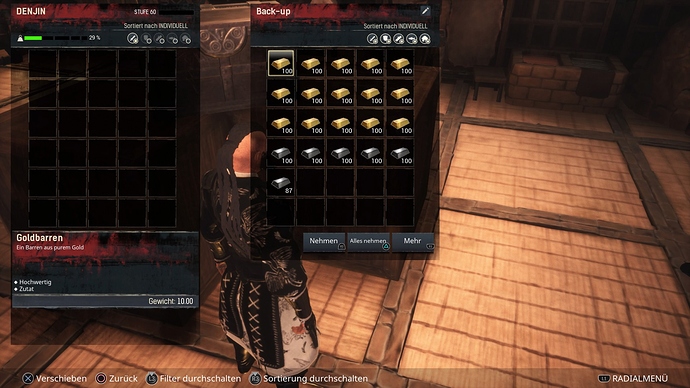 I would also like to see merchants who purchase items. Say 1000 leather = 1 silver coin as a random example. It will be a good way to get rid of unwanted materials an also earn more coin to spend on the other merchants.

I totally agree with all those ideas. And I would go even further by wishing that the economic system of the game evolves along with other neutral cities with merchants. I find it hard to believe that after so many years in the Exiled Lands, the exiles have not further developed their economy and trade routes while the craft is as good as outside.

Thanks for the welcome Croms_Faithful

You’re so right with what you say. Saving and shopping are powerful motivators. Aside from the fact that’s many people’s MO IRL it’s just the most addictive in game mechanic. Gold and jewel hoarding in Diablo for example… Good god is it addictive. The pinnacle of which is chasing a treasure goblin across the map and having a portal open to the treasure realm. It’s like some sick and joyous perversion of wealth… Aaand I want that in CE

Then being able to spend the money to be unique items… Perfection.

I’m all for this idea, I’d love to see a real economy system in this game.

Well thanks for the support Arsenalcontrol. A real, fully functional economy and two-way trading system would be the ultimate goal for me too some day. However I feel that there is still a question mark hanging over that one at the moment. If it does happen, my guess would be that it will lauch with the Settlement System update. Heres hoping anyway. For now, hopefully some additional Merchants will give us a tadte for further trading, and add some much needed variety and life to Sepermeru; make it feel like a huge city and trading hub.

The jeweler and trinket merchant are great ideas as well.

Thankyou. Again its all about encouraging others to save money, and then spend it on worhwhile rewards.

I’d like a way to display all of my wealth.

I would love to have something along the lines of the Deathbrand treasure room from Skyrim in my base. Throw a scantily clad Dancer or two in there. Now thats decadent luxury. 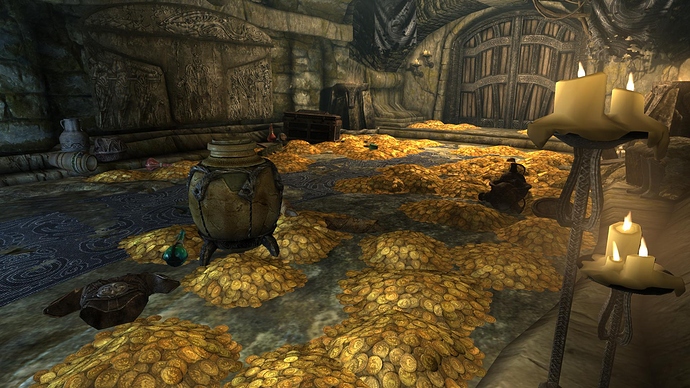 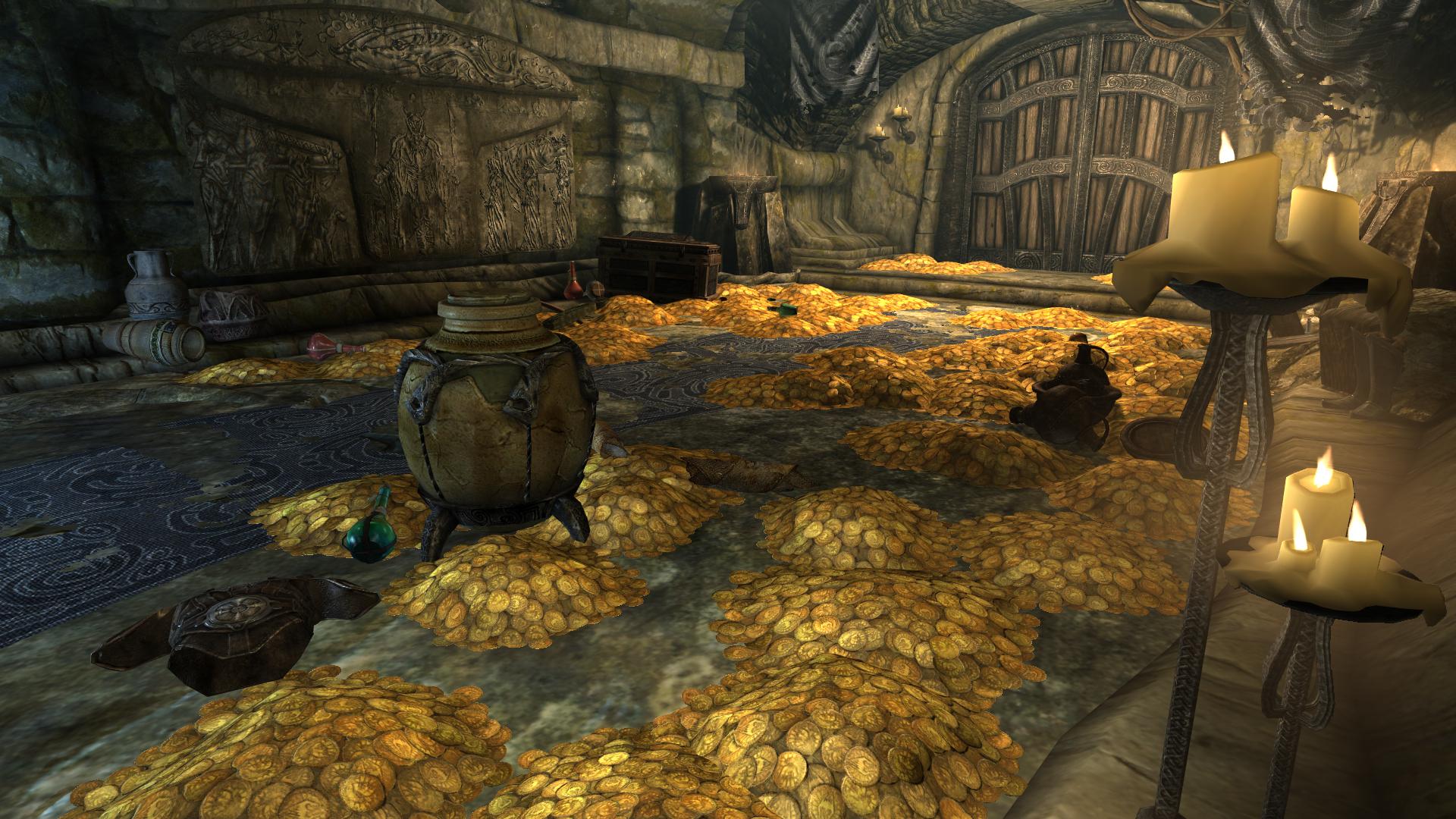