I somehow don’t think people do actually understand that now, which is probably why there are still so many claims being made and why he (rightly) felt is was a good idea to clarify.

It appears the new anti-stacking fence foundations has a bug where you can get (free-handly) about 1/2 the density that you used to have before. 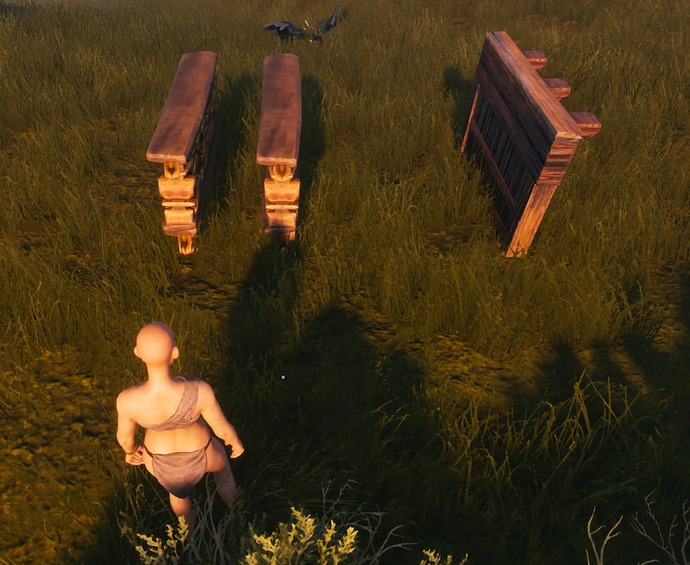 image1267×1038 128 KB
I found I could get (at least) as close as my 2 sandstone fence foundations here free hand, until I was attacked and dealt with a shoebill that interrupted my testing. Then the game would no longer allow me to place parallel within 1 foundation square.

I had seen someone online testing it (and yes, for test live) and they were getting closer than I had thought possible, but it appears the Devs have only sort of implemented this so far.

That image is of a TestLive session?

I added it to the OP…

Funcom’s recent messaging on the topic:

When a lot of building pieces are stacked in the same location it can cause clients to crash, and servers fail to load buildings correctly.
One of the primary reasons we made this change is to reduce those crashes and failures to load buildings. This strategy was an exploitation of a bug that we unfortunately did not get to fix properly before it became the expected way to play the game for a lot of veteran and high end players.
With this change, we know that the pace of PVP raids will change but making the changes will allow us to monitor the situation and player expectation.

We can also make future changes to either building health, siege damage from all sources, or both based on the feedback we get.

If you would like to keep an eye on the ongoing conversation about the anti-fence staking feature, you can [continue to] check out this thread…

Thank you again for always providing us with valuable feedback and for helping us improve the world of Conan Exiles.

No actually this method was not used in EA

The “meta” in EA was to build on a pillar with your stair away from the door, then jump into your base across the gap. You could open the door from the stair, the higher up the pillar the better, sometimes the fall could kill you if you missed the jump.

Because climbing wasn’t a thing, there were no elevators either.
Orbs didn’t happen right away, and explosive arrows didn’t happen until much later.
Trebuchet showed up right before climbing, I think pillar bases are the reason trebs exist.

So by placing a door up high the jars on the ground couldn’t reach, and you built the stair from sandstone and away from the door so one jar would destroy the stair with only a little splash damage to the door.

So even though you might have been “able” to do stacking in EA no one was doing it.

The whole reason it’s going away is because it has become the new “meta” and everyone is abusing the mechanics, it’s causing problems with servers.

I know how much people wish it wasn’t going away, hell I even used it myself in the past.

OK so we are saying the balance is off. Multiple the resources for explosives and avatars by say 10. Does that even things out a bit? Can anyone tell me that the current build strategies and appearance of PVP servers aren’t, for the most part, junk? So instead of defending the methods that are being removed, petition the limiting of offensive building damage. I agree that walls fall too easily with jars. Nerf the jars. PVE crowd doesn’t care about the jars…its only PVPers that care. Make raid prep annoyingly tedious to justify the destruction it causes.

Background: I had a 10 layer deep fence stacked entrance to the Eastern Barracks where I was storing my stuff and trying to build. Got wiped by a clan who were just passing by and had enough bombs to spare. Took them 30 minutes. I don’t get off of work until at least an hour after the raid timer starts, so everything I had was gone. Haven’t played in months until recently because I was so salty, and have just now gotten back into the game

Things I’m taking into consideration:
1- I like fence stacking, but I do agree that it’s a pain for the servers to keep up with. My 10-layer deep wall isn’t bad. The several hundred layer deep fortress that someone built near Sepp, however, made my poor xbox cry.

2- Bombs are ridiculous. Their damage is insane compared to the amount of resources needed to craft them. My thoughts are to reduce their damage, regardless of any other balance changes. Their alpha strike is way to high, even if they were “balanced” against stacking.

3- I think funcom is making the right move with the removal of fence stacking. I don’t like it, but as someone else posted: It’s hard to balance individual pieces of buildings when you have to consider that someone can layer 8-10 in the space of 1 foundation. Hopefully, we can start to see some other building pieces being buffed to compensate.

4- Unrelated to fence stacking, but related to PVP and raiding: Offline raid protection. It gets mentioned a lot, but my thoughts are something related to the example I’m about to give: I play, I log off, and 4 hours later my stuff is protected from building damage. This way, I have to choose between building up my base, or cut about my available farming time in half so that my things will be protected. This also prevents me from simply logging out right before raid time so that I’m invincible.

TL;DR: I’m sad to see the rather ham-fisted changes to fence stacking, but hope that we get some other balance changes that the removal of fence stacking will allow for.

Second, make dragon powder only craftable at altars. Maybe tie resource cost to it. T1 100 steel fore, T2 50 steel fire and T3 25 (but now you are marked on map).

and finally, 2 secind place animation. This way spamming from 8 blocks away while dodge rolling is not a cheesy way to lay out bombs.

I’m pretty sure followers of Crom will get up in arms about requiring godly magic to make dragon powder.

Well, guess that sculs for those very few.

Well, guess that sculs for those very few.

I’m what my good friend @Barnes calls a “peaceful” PVPer
that basically means I wont hurt or raid you, unless you act aggressively to me first.

When the raid time went to evenings and weekends it severely hampered my ability to reciprocate if I get raided, because of my available free time.

If dragon power became a god magic only, I might as well go PVE because I would only be a loot piñata in PVP, and as those who know me would attest I would lose interest real quick.

never said it was used. I said its been IN game since EA.

So instead of defending the methods that are being removed, petition the limiting of offensive building damage. I agree that walls fall too easily with jars. Nerf the jars. PVE crowd doesn’t care about the jars…its only PVPers that care.

You really need to do both though, at roughly the same time. Reduce jar damage AND make layering impossible. Because if it takes 60 jars to blow up one fence foundation, and you could still stack foundations… it doesn’t take a genius to figure out what people would end up doing.

I’d uh, prefer it if nothing in the game I play in my precious spare time is annoyingly tedious, thanks

never said it was used. I said its been IN game since EA.

Duplication glitches were around in EA too, that doesn’t mean they shouldn’t be patched out.
and that is all this really is, an exploit being patched out.

No matter how popular an exploit it became, it’s still an exploit.

We should have a working means of off line raid protection that doesn’t involve using build tricks and exploits.

And no offense, but you basically are a pvec player who abuses the mechanic of easy farm rates. No different than current alpha strategy, hoard 1000s of dp and use it to avoid pvp.

I’d uh, prefer it if nothing in the game I play in my precious spare time is annoyingly tedious, thanks

Hey you signed up for that by playing a survival game…might as well called it SIMS work.

Don’t touch the construction system, it works well, there is exaggeration of course, as in everything, there are many ways to break a base, you have bombs, you have arrows, you have trebuchet, gods and just in case people don’t know connect the leave time. there is no base whose walls do not fall if they do not defend it.