I love how massive and in-depth and detailed this game is. I have over 1000 hours in this game and there is still so much that I don’t know about it. I remember when I first started playing this game that I didn’t really know how things worked or where I should go or how to beat it. While it can be fun to explore aimlessly and experiment with things, it can also be frustrating.

What if there were a thrall that you could capture that could give you a bit of direction, suggestions and lore. Once you break them, you place them in your base and then you can interact with them like some of the NPCs scattered around the land. The higher the tier of scholar then the more detailed information you would receive. They could hint at where to find treasure or where to find certain materials or give info about the biomes and beasts.

I know there is a wiki for this game, but it can’t give me suggestions or direction for things that I don’t know to ask. It also breaks the immersion for me when I have to open an internet browser window.

It sounds interesting. But could use a bit of refinement.

I’m reminded of the Guide in Terraria who could give hints but experienced players wouldn’t have a need for those after playing for a bit. But then they expanded the functionality to include recipes for crafting. You put in an item and the Guide tells you what you can make with it.

Something similar could be done here. If you want to look up an item directly without needing a wiki, it could be useful. I know Thrall Wars Dungeon mod had a function where you could look up item recipes. But an NPC would be a ton more immersive.

This way it could help players who need a bit of direction AND experienced players also.

But you also said this:

And so we can expand this a bit further. Maybe you use resources to help the scholar divine treasure locations. And when this is done, actual stuff spawns in the world related to the location the scholar tells you. You have some time to go collect it and the treasure could be good, or not. Or even a false vision leading to a fight with a dangerous creature (which can have a great reward upon defeat).

Of course you would need to act on said vision before another finds it. But at least you have a headstart.

It definitely needs more refinement. I like the idea of the scholar creating little individual world events. It could also alert the player to the general location of the new server world events in the patch they released today. This would keep them relevant and useful for every level of player.

Heck I would actually love this idea with this addition…he/she crafts recipes. Funcom would have to figure out a tier level system for it but you supply certain items (maybe fragments of power, blood, various lotus, star metal ore, parchment etc) and the thrall starts churning away at developing a recipe. Recipe level would denote the time to complete (1 day for a T1 recipe, 3 days for a T2 recipe, 1 week for a T3 recipe). Examples of levels would be food feats would be T1, library of essoteric would be T2, T3 would be the special dungeons (warmaker, Dagon, Black Keep) and the Siptah recipes (exclude the recipes that require eldarium if you are in EL).

Oooh what if instead of just a new thrall there were a new “Library Bench” where you could craft different classes of Tomes of Knowledge (recipes). The Scholar Thrall could be placed in this bench and give it new Tome recipes based on their Tier. It could work much the same way as cooks and stoves.

There could be undecipherable books that drop around the world. You would bring them back to your Library Bench to be studied by your scholar. Once the study timer is up it could give you a new recipe or location of some kind.

Edit: Having a new bench would also allow new players to start using this right away for T1 information instead of having to find a thrall first.

Great ideas all around!

That’s a great idea and it would encourage more exploration and knowledge seeking. There are so many things this feature could include.

I also think “Sage” would be a better title for these thralls than “Scholar”. Maybe “Oracle”. Whatever fits the Conan lore most appropriately for a learned person.

The more I think about this, the further I get from the original idea. I think this should start by spending feat points to unlock the first tier “Library Bench” at, say, level 10.

They could tie this thrall to numerous things. A map/compass upgrade. A vague window for when star metal might fall. Maybe even a slight stamina boost for your horse or your character, because you now have knowledge of “more” efficient routes. It might even be a way to introduce “quests” of some sort. Something that is hugely lacking in this game.

Even if it’s as simple as …

Perhaps a tier 4, or a purge version could even provide quests with difficult to attain recipes on a long cooldown.

To be honest, it’s a great idea. With some polishing and solid reasoning behind the purpose of the thrall, it could be a nice addition to the game.

What I would really like is for a thrall like this to help explain some of the game mechanics that aren’t obvious at all and keep tripping up new players really badly.

The biggest of those is the decay system. I’ve lost track of how many times I’ve seen a newbie log back in and wonder where their wheel of pain or animal pen went, all because the game doesn’t do anything to let players know that it’s not a good idea to place those on bare ground away from your base.

Also it can provide Siptah sigil locations in EL (random location drops that you need gravedigger to dig up) . The possibilities are endless in crossing the two maps together into a cohesive way that doesn’t require transfering the character.

Maybe random hints from the wiki?

What I would really like is for a thrall like this to help explain some of the game mechanics that aren’t obvious at all and keep tripping up new players really badly.

Yeah, that’s something that’s been bugging me about modern games since I started playing Minecraft. That was the first game where I was like “WTF” and had to go look everything up in a wiki. Terraria’s like that, too, although the Guide NPC is now much more useful.

To be fair, Conan Exiles isn’t half as bad as Minecraft. The leveling system, the journeys, the in-game lore documents, and lots of other stuff I probably forgot to mention – all of that is there to guide the player and it often does a pretty good job. But still, there’s some really painful stuff – like decay system – that isn’t explained at all. And there’s other stuff, too, stuff that isn’t painful, but there’s no way to discover it in-game except by sheer stupid luck. For example, do you know how to bake bread? Most people don’t, because it’s the only cooking recipe that is crafted in a furnace. Good luck discovering that.

So yeah, a Scholar thrall might just fill that niche.

I know there is a wiki for this game, but it can’t give me suggestions or direction for things that I don’t know to ask. It also breaks the immersion for me when I have to open an internet browser window.

In the meantime have you used any of the web based interactive maps? 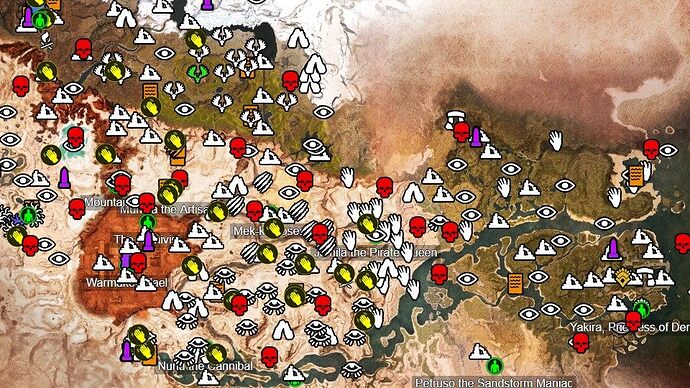 World Map of Conan Exiles, including Volcano and Swamp biomes. The Exiled Lands in Conan Exiles is the location where the game takes place. Discovery locations such as vistas, camps, dungeons, caves and teachers and other interactable NPCs, fast...

…and when provoked or needing to defend himself he can throw Turanian tomes at assailants.

(all that gold inlay and lacquer; heavy)

his idea of ​​implementing some guide was the triumvirate staff but it is very ambiguous and not really a guide.

I kinda liked the staff actually, was a great idea (the concept itself)

The issue I have is it just doesn’t work very well. I mean you can’t hold him, and you can’t place him down in certain places, so he just seems to end up being stuck in a loop saying the same thing over and over.

I know I have barely scratched the surface of what he has to say still, even now.

Not only that but the whole thing was dependent on you finding him and doing the whole ‘awakening’ thing , I didn’t even know he existed the first time I played Conan, I’d already hit level 60 by the time I knew what he was and how to use him, a shame really.

It’s funny. I just found the staff and did the awakening thing a couple days ago after I made this post and thought to myself, “This is kind of like what I made that post about.” LOL

I had no clue it was in the game.