I fixed the problem! I set the High DPI Scaling settings on clicksaver’s side to match the normal AO settings. So now clicksaver is scaled the same as AO. CS is now smaller, but it’s usable and AO is playable normally the way it was before. It seems it doesn’t matter what the scaling of either program is, as long as they are the same. Clicksaver must use some kind of proportionate distance between the missions and buttons.

Glad you found a fix!

It’s a great gui but it’s much too dark.

A brighter lighter version using tan, Grey, etc a different color than the normal green and blue should of been made years ago and I’m surprised it wasn’t.

Yes that’s what I want too… Like the real dovvetech ui!

If you have change requests, improvement suggestions, or some issue

Would it be possible to prevent/disable/ignore/quickly close the new “feature” of shop interface popping up in your face?

No. It’s not an active scripted GUI, all it does is setting GUI related variables (which in turn control the visibility of GUI elements) to specified patterns when a GUI button is actively clicked by the user. It cannot react to other events nor can it independently poll element/variable states without user action.

nevermind, i wasnt patching my files properly. the buttons are there.

This is great! Well made. 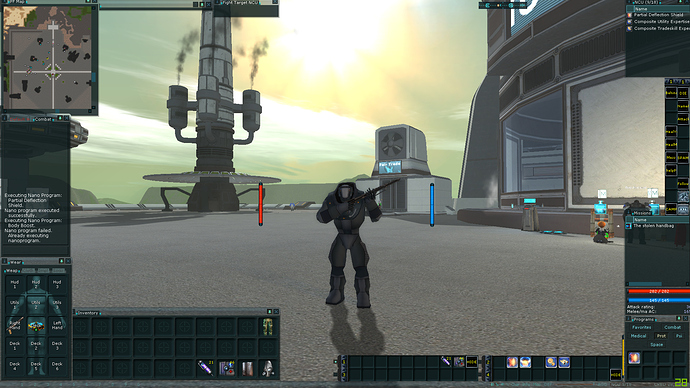 In case there’s still someone who might see this…

Since certain recent events brought me back to take a look at ndGUI, I should mention that the first site (the rubi-ka.net one) linked the opening post is severely outdated as I’ve long lost access to it. Oddly enough it’s still up but I can no longer uodate it. The second site (the https://sites.google.com/site/notumdovvetech/ one) is the one that I am able to keep (sort of) up to date and release updates should that ever become necessary, so please use that if you are interested in getting ndGUI.

On a related note, would anyone know who could/should I contact regarding the possibility of getting the opening post edited to remove the outdated link (or even take ownership of it if that’s possible at all)?

@AndyB on discord will be your best bet, Honorbound.

While you’re up though-- suggestions: (I use Dark Mini)

A daily login claim button (if it’s there I;m blind)

The compass mission marker-- didn’t realize how useful an orange one is.

and last but not least-- a less dark background in the inventory & backpack slots. As they are any black items are invisible.

ND is AWESOME-- Thank you.

Ha! Didn’t look like you are still around. Thanks!

If the “Daily login claim” button is what I think it is, then you may be using an outdated version (or just my placement of those functions is less than intuitive and you couldn’t figure out where did I hid it). 4.3.4.8 has a “Shop Menu” under the Misc menu button with buttons to open the item shop, the login rewards and the pending rewards windows (judging from what they invoke in the XML). I suppose I put them under “Shop” because they all use the same embedded web UI component (as I recall, haven’t actually seen the game in a while).

The blue dot compass marker is in line with the overall Dark theme color scheme. Orange is indeed easier to notice against all the blues, but that’s the one used in the Dovve variants.

The short HP/nano/etc. bars are part of what makes Darkmini “mini”, the regular Dark is very similar but with normal sized bars and a more pronounced window frame. So maybe switching to Dark from Darkmini is what you are looking for.
(It also shows from which era the whole design is from; on HD and above resolutions, the entire GUI might be a bit too small, while 10-15 years ago we were struggling to get more screen space by shrinking the GUI as much as possible. But as there is no in-engine resizing, high resolution variants would also require their own theme packages, with all textures being upscaled and reworked from the “normal” sized ones. And that would be 260 files to rework. Per theme, minus the ones that are shared across the two main style branch.)

The too dark item slot background has been brough up before as I recall, as it clashes with certain items. It would need texture work and additional theme variant packages. Or…

There used to be a Morph theme variant which allowed you to mix and match elements from any of the themes as you like with a web based config tool, but it was somewhat inconventient to use and needed a proper web host to work, so it’s been unavailable for a while now. I’m actually working(-ish) on a downloadable config tool for ndGUI that would restore that functionality (and also the ability to customize the layout of the main UI beyond the 8 default templates), but it’s going to take a while.
Resurrecting all that would also make it possible to add some more options to the Morph theme (technically, to any of the existing themes but it would complicate their build process and management) , such as brighter, but otherwise in-theme alternatives to things like the item slots, without having to make a new separate theme package for each such individual option.

I still have the thread subscribed, but it seems I missed some email notifications about it

Exactly. DarkMini was created as more and more windows (multiple chat windows etc.) were cluttering the screen and every pixel counted.

As for high res versions an additional difficulty is that not all UI element sizes can be changed but are hardcoded in AO -.-

There’s a slight bug in the “Organization information” window. (target someone and do /org info)

The GUI definition doesn’t (can’t) modify text formatting, only the look and layout of the “container” window the text is displayed in (including global font color and size, but nothing else). So if the issue you are referring to is the missing line break in the “Level:” line, that’s because it’s missing from the string itself that is passed to the GUI handler for display. It’d look the same with the default GUI.

I’m not even sure that that window is included in the moddable part of the GUI. There is no specific file for it, so it’s either an instance of “InfoView” (which works correctly in general), or it’s one of those windows that are defined inside the GUI manager .dll itself and cannot be modified at all.

Hey I have a question about ndGUI. Is there a way to “move” the cred/aggdef/button bar to top of the screen ?