My game has been freezing a lot right after I load into the server lately, even right after this hotfix.

Thanks for the tip! I’ll try again, I had sat in one place for a few minutes and still hadnt noticed any change. We shall see!

@Jens_Erik I know you guys will not want to give a time table of fixes ahead but can you at least put a post up of planned fixes. It would be really good to see if you guys are planning on fixing some of the bugs we are reporting outside of connectivity issues that some people seem to have.

Thanks FunCom for actually getting Conan Exiles out to us, the game is great and there are problems but overall it’s fun and a lasting experience. My only problem is that I have 7 friends to play the game with and we just can find an official server with enough open space and it would be lovely to rent a server but all the Gportal hosting location are full and I would love the ability to rent a server by just using a link in the actual game kinda like the way XBox can. I also would love to have a date of when that my come.

Has this been fixed for you yet. The same thing is happening to me.

Nope, and I also have let my character sit here for 30 minutes. I’ve died multiple times. Still didnt help.
I’m going through all things actually, I just tried it on a tree and I glitched through it.
It seems to be any destructible object so far

Why don’t we fix the rage inducing lag on YOUR official servers. Why am I rubber banding off a cliff when the server has a ping of 60-70? Get your hosting together and fix this. It’s bull that I paid for a full game when I die because you can’t host a server correctly.

[Ps4 Pro]Thanks for the hotfix, but when is the patch coming to fix thrall health regeneration (yes Ik dev are aware of it and it has been noted), but does it have to be in a big patch or something…? why cant it just be a hot fix?

Oh it the last 2 hotfixes did not fix the draw distance and pop in issue. Slow texture load on very near objects still take time to appear. (oh btw I’m playing with boost mode on, not that it seemingly make any difference lol)

Hello there. It’s three days I cannot play. I could play on the weekend but since Monday it hasn’t been possible. Yesterday, after downloading the hotfix I could see the servers, but all of them were marked as FULL (40/40 players) with a ping of 9999. Also the Refresh button is not available. I mean, it’s there but there is no way to select or click on it. Please fix this problem. The server I play on is 3513 America. I have played many games online and I have never had any problems, so it’s not my router. Hope to hear from you soon.

Yeah this is getting very annoying. Even my private server is messed up. 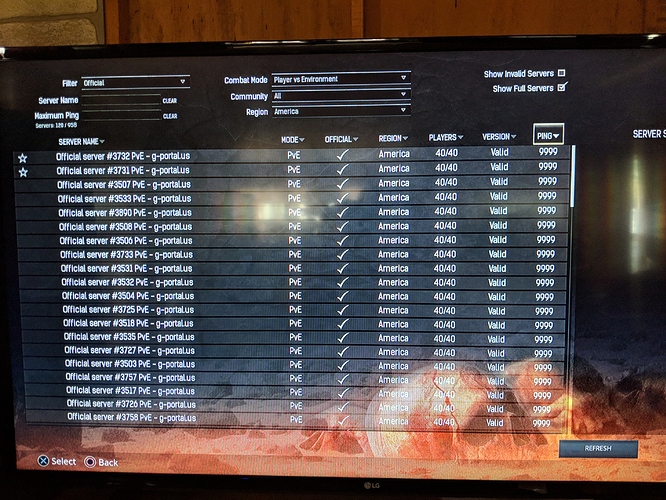 After this hotfix now i stay on for about 10-15 mins then get booted then it shows my server is full. I back out research servers and its 18/40. Log back on and get booted again and showing full again. Done this 3 times in around 1 hr so far. Never had an issue before this “hotfix”.

I am very excited about the upcoming changes to lag spikes! I play on server 3505 and have been having lag spikes since day one. However, I think that there was an unintended side effect to this hotfix. Ever since the patch dropped, I have been ghosting through buildings (both my own and other players) and have not been able to interact with anything. This especially worries me because my purge meter is “ready” to be activated. Do we have any word on the ghosting bug?

Enjoying Conan Exiles at the moment - However

I’ve recently purchased a private server (G-P****L) for the PS4 (currently using PS4Pro) and I’ve been subjected to several server crashes, it’s been that bad I’ve been suffering up to 4 server crashes in the space of 50 minutes. I soon realised after testing the server for a few hours that the server would guarantee to crash if I went into Admin Mode and enabled the GodMode or the NoStamina, it would take about 8 minutes to crash the server completely - to a point where I’d have to go to my server providers’ website and manually restart the server as it would be registering as “offline”.

Other issues the server players and myself have also come across in the last 24hrs are:

Even though I’m enjoying the game with these small issues present - I’ll be honest, these are issues I’d expect in an early access game and definitely would have expected these to be ironed out by full release.

I think the biggest issue at the moment would be the private server providers - for example, the servers have been a shambles, especially with my service provider openly admitting that they do not having the hardware to support the performance issues that they’ve been having, but yet they still continue to charge people for a service to which they evidently cannot provide.

crashing for me too on ps4 pro 10 times in one day. now it comes up with error ce 34878_0 lost all my game saves single player. will not load my save not happy. think i might go back to ark. disappointing this looked like a real winner conan exiles. i hope some update will fix this so i could get back what i lost.

Well to be honest, this fix didn’t fix anything if not made things only worse. Since launching i had no problems but now after this hotfix the game became the lag fest everyone complained about. Audio lag, input lag, lag swimming, lag in fights. And thats all after the fix while i play offline and solo. Amai gotta come back in a few weeks i guess

make sure you back up everything even on solo i lost a week of game play. because of an error code 34878_0 and it was was crashing over 10 times a day before this error code. it will not load that last save i now have to create new game. but i have decided not to play it. this game should never have been released it is no where ready.i was hoping this game would be better than ark it has all the potential more building stuff. but ark does not crash.you just do not want to build anything because this will happen again.

It was actually flawless for me on release, they seem to have broken some stuff while trying to fix it, but it also seems they are all over the place when it comes to makes promises. Maybe funcom bit of more than they can chew