We’re deploying an emergency hotfix aiming to take care of some of the critical issues that have arisen after Update 41. In particular, these fixes should address the problem with “lost characters” some players have experienced after playing with the new update. We have implemented measures to prevent this from happening again, and we have added a system to merge the old character with any profile that lost access to it even if those who got affected by it proceeded with the creation of a new character.

We have also addressed a number of crashing issues related to Windows 7, connectivity and logs, as well as optimized some settings to mitigate some of the stuttering problems reported by some players.
With this hotfix, we have also ironed out some remaining issues with the server browser, such as servers with “???” ping (they will now just show it temporarily while they’re getting pinged) or listings that would cause a connection failure. 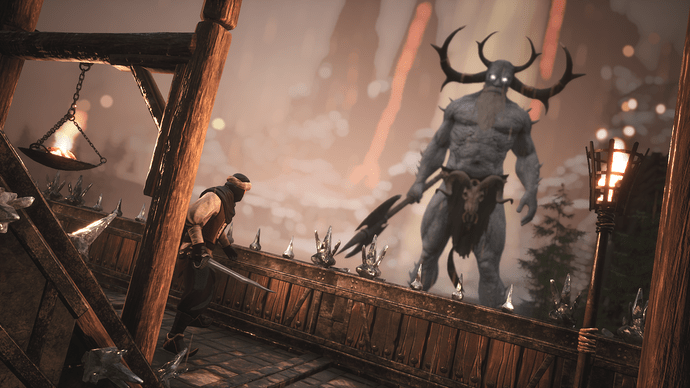 Thanks for all the support, and stay safe.

Hotfix (June 18 5:15pm EDT): A new hotfix has been released for PC. This fixes a client freeze that could occur when the client restarted after using the Mod Mismatch GUI. It also includes a crash fix related to filtering the server list. Investigation to the other known issues ongoing. Thank you!

Hotfix (June 19th 1:30PM EDT): A new update to PC is out now. This will fix garbled server names as well as an issue where the client continued to ping the server constantly after connecting.

You ought to give official servers a harvesting bonus for the next few days to make up for this mess.

Thank you for working so hard to resolve these issues.

I agree something should be done. They sh*t the bed hard on this one, but official servers are hardly the only ones being affected. At least 1 modded server I know of had to completely wipe and restart because of this.

Thank you for working so hard to resolve these issues.

Only in IT does this happen !

That reminds me, I must call and thank my mate who paid to repair my car… after he crashed the car !

So what about all that we lost when we could not get on the official servers? All the Thralls, Pets, items all lost because of this mess please tell me and the community what is going to happen?

yeah my server was one of those servers that had to wipe. not too happy with how this live services thing has damaged the game performance at all.

Thank you for working tirelessly to resolve these unexpected issues. I’m sure it wasn’t easy. Keep up your amazing and hard work. The majority of us, though quiet, really do see and appreciate the hard work you guys put in.

They wouldn’t have needed to if they had actually allowed the community to test it before shoving into a live environment.

edit: Also wanted to comment that “these unexpected issues” are FAR from unexpected… I expect them with every Funcom patch.

A lot of my players are still unable to connect?

Logging on (to a private server), I get my old character back instead of the login screen

The favorites server at the ingame server browser are still not working. Steam connect via port 27015 still shows all as offline.

update: I restarted my server yes I am on a private server and still brings me back to the character creation screen so much for a “hot” fix it did not fix anything.

Should this fix the “I logged in to my server only to crash out in under 5 minutes of play” issues?

I know the others that play on my server haven’t had this issue but I have. Am able to play on official servers, single players, but not the private one I normally play on. I have already done a full uninstall and reload of all files. Will try again this afternoon.

I had (apparently foolishly) implemented a fix located here: How to get your character back and keep playing while waiting for Funcom to fix update

And now my character is gone gone gone.

After the update, it is impossible to go to any official server. Message: User is blocked. It’s not just me.

still having the same problem
( the instruction at 0xfd601ba4 refernced memory at 0x00000000. the memory could not be written )
when i start the game but this time it takes longer to show so what should i do ?

Game freeze then crash after 3min ingame for several of our players.
Freeze > blackscreen > only way to recover is hard reboot

We got our characters back tho…

This hot fix has not fixed the character loss issue on the Server I am on.

Same for players on my server. in fact it’s added more lost characters than there was before hand…