We wanted to address a few critical issues introduced in the January patch that affected gameplay. We’ve also re-balanced some 1-handed damage multipliers based on community feedback.
We’re still working on AI improvements aimed to enhance the follower system experience which will be rolled out in the next couple of content patches. 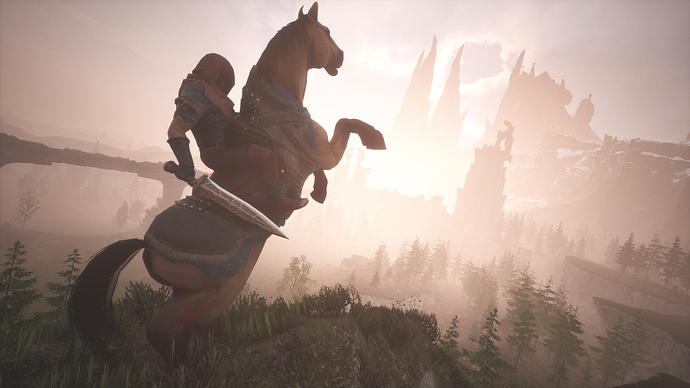 Thanks for your ongoing feedback and support.

Thanks you very much

And bug of elevator Is patch ?

I’ll test out the disconnection exploit and see if it’s really patched. Thanks

Have you fixed the missing yeti purge in the frozen north???

@Ignasi
And what about trebuchets that shoot through protective bubbles and from a closed room without damaging the ceilings?
And What about constructions on land belonging to other players?
And What about the NPCs who teleport out of the base and get killed when they’re following someone on the base? (base high on 3 floors, I was at the top (on the 3rd floor, my PNJ was found at the bottom outside and died)

Dear funcom i dont know how ur do it, but some one have to take a god look at ur artisan and maybe do a change.
Now you put back the issu wher you drop loot on the ground and cant find it in ur inventar afther you pick it up.

How do you do it? Is it realy so hard to do it righet.

I was hoping the deadeye perk on fighters was fixed in this patch. Darn. Maybe next time?

Thank you function! You’re community communication and response is excellent!

I am not rubber banding anymore after fast travel from map so that is great. Hope Hanumans issue gets a fix quick. Thank you guys

Awesome job getting this patch rolled out within a week of the bug becoming an issue!

Hope to see you be this diligent about fixing bugs in the future.

@Ignasi I can’t equip my right hand! I can equip a shield, but that’s it.

Game mode: Online PvP Problem: Critical Bug Region: #3835 I cannot equip my right hand. I can equip a shield in the left hand, but that is it. I tried in on PvE-C and PvE and those servers worked. It is not working on #3835! This last patch made the game unplayable in online PvP. Steps on how to reproduce issue: Login to #3835 Press L1 and a select weapon from from the dial Note it activates but does not equip! Unplayable, so whine and cry until the next patch

Dis this fix the zero stability issues with walls ?

Curious as to which main 1h weapon you are trying to equip that won’t work?

Thank you so much guys! Can’t wait to go home and play! The dying glitch on SP was really annoying. I really didn’t like having to make myself an admin to fix that, feels like I’m cheating even though I dont use any commands. I’d love to have a “block admin” option so I can never be admin. It’s not really important, but it’s just a suggestion for those that feel that having the option to cheat is annoying.