PVP'ers, tell me about target lock!

So i’ll make this short,
I’m a server owner for a long-running RP-PVP community, and for a long time there’s been a discussion wether target lock should be left on, or off. I’d like some (genuine,experience-based and neutral) opinions from the PVP community (particularly PC) on it.

In the discussion in our community, the fear of dagger-spam has reached nearly mythical status at this point, but i’m not a full time PVP’er who can for sure say that it doesn’t have counters,like hyperarmor and dodging out of stuns etc.

Would be great to hear some CALM,RATIONAL and well reasoned arguments below, for or against.

PS: Remember, i’m going to use this to consider target lock for a RP server,
where pvp mostly happen in the form of duels or raids where the defenders always get warned beforehand. There is no ganking, and server staff watches closely for exploits.
Keep that in mind, we’re happy carebears, so adjust your advice and opinion to our puny level please!

i don’t really think is a issue, i don’t use it on pvp often but i like to use it to target things and see how much HP they have.
is specially useful on large scale battles where you don’t know who is who.

the meta is dominated by feroxic daggers because is too damn broken. that is not an issue with the target but rather with the weapon.

Would be great if you could elaborate as to why ^^

Thanks! Have you had any fights against dagger users who used target lock? Would be great to hear how it went and what your exp with that is, if possible

not arguing that your opinion is invalid, but it might be clearer in the video if the player was facing an equal opponent with daggers and actually fought back.
Like i said in OP, i’m asking for a RP community where nearly all PVP encounters are 1v1 duels.

Well you can’t really fight back vs 3 focusing you. This will simply be suicide. Even if you bring 1 down.

I see you need to experience more PvP to completly understand the issue.

is easy to counter, just grab a 2 hand hammer and use 2 hits of left click. never full combo.

but see the video dave just posted?
4 hits and he was almost dead PLUS the poison. Thats feroxic daggers for ya.
is not about the target lock.

That’s why im asking for PVPer’s opinions, but not about this kind of fight from the video.
Let me ask differently ^^ If you were to duel a dagger user and the server had target lock on,
could you beat him, or is it impossible? And if it’s impossible, is that because of daggers, or target lock?

So there is at least a counter to daggers in general then.
Pretty sure the moderators of the server i host have chucked auto-poisoning weapons in the ban chest, btw.

Depends who hits first and if you manage to escape autoaim left click spam from daggers.

Sure, you can abuse hyper armor but the dagger user can just counter play and hit you in between your hitting frames by poke&roll.

Laggs plays a role. If you get hits out of nowhere, gl. Autoaim helps against lagg. 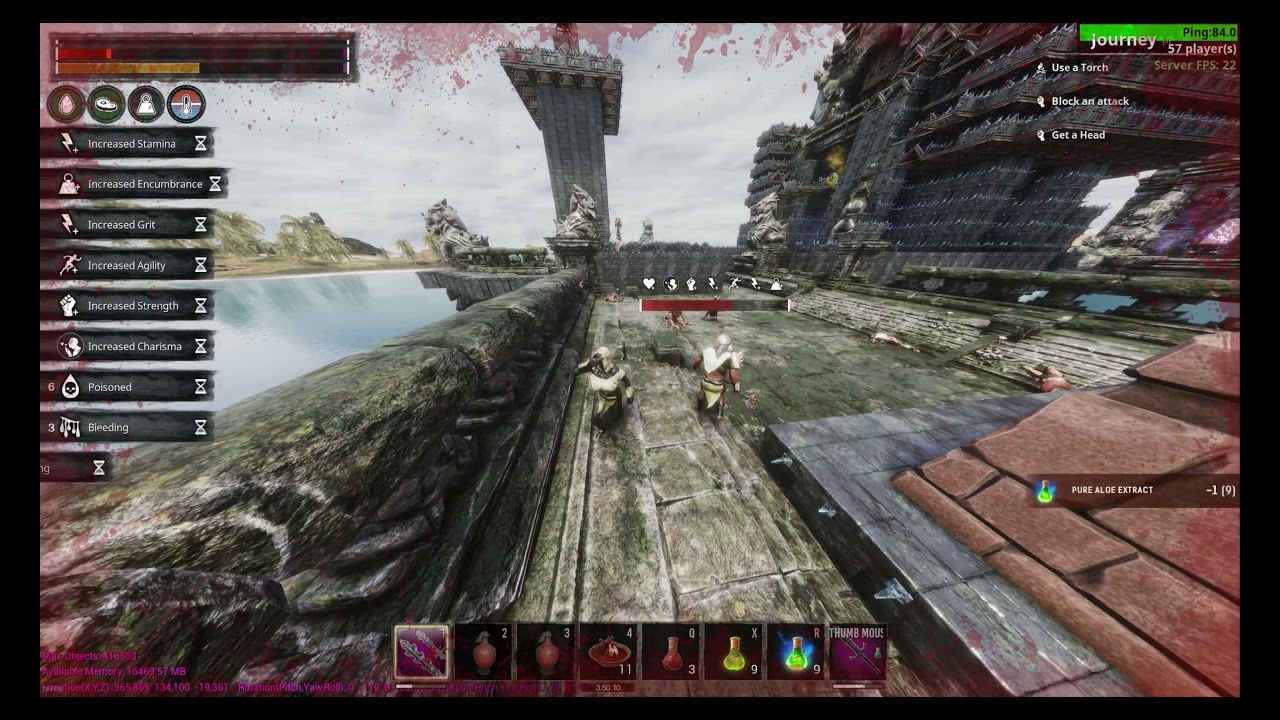 I never use the target lock, and i can hit someone almost 100% of the time with all the “hard” weapons

EDIT: my brother can too, but he uses the lock to make the fights a little more cinematic so to speak

The best PVPers out there do not use target lock. Some use auto facing. Some even play in first person (they’re kind of scary if you think about it). Some just have a natural affinity for the game, they’re patient, analyze their opponent and are quick to trade then be triumphant.

Using target lock is usually frowned upon because it removes a large element of what people respect: skill.

Target lock is disabled in most private PVP practice servers for very good reason. Part of it is skill and the other as described above, it is considered an unfair advantage.

About the only time I use it is if I’m trying to target NPCs so I don’t accidentally kill a wanted thrall. The other, which I use sparingly if at all, in dealing with ping abusers.

great replies both, thank you <3

Definitely. Couple of ways really: broadcast tournaments, regulars on Dogs of the Desert and the community is small.

And I’m not going to bother name dropping people or the leader boards on other private PVP servers with that enabled.

Actually I think it would be good for OP to check out some of these spots to help make their decision.

And yep, consider that Dogs is a euro server.

The unbiased answer is that they are both correct. If target lock is on, it makes daggers incredibly powerful (the other weapons… not so much), and take little effort to use. However if you turn it off, then they do pretty much become useless. There’s videos that show a dagger user touching their target with their own body and unable to land any hits. There’s also videos that show them effectively aimbotting to the target as well.

Turn target lock off. Its a crutch and those using it without daggers (and everything after this is assuming daggers aren’t being used) are actually hurting themselves and not learning how to properly fight. Target locking against a good player will almost always result in a loss. Turning it off makes it a tad more difficult for newer PVPers to get into PVP but then they don’t develop some really bad habits. This helps them in the long run.

The downside is you effectively hurt controller users (who are already at a severe disadvantage to begin with), and make daggers useless. But one weapon being useless in PVP is better than it being the go to weapon at the expense of all others. Eventually daggers will see a fix. Bad habits gained are harder to get rid of.

This one’s primary points have already been mentioned.

Target-lock favours a very particular weapon that is quite good for ending other players. Especially in a more open fighting area.
In many ways it is beneficial the more lag that is present. Which can leave some very bitter tastes in mouth.

Now, with new side stepping and other features coming in 3.0, to say nothing of stat rebalancing (it seems many of the weapons that benefit from target lock will be Agility coded) this one wishes to withhold judgement.

Much of the conversation and views around the topic will be poisoned by proximity to a very specific weapon and having a discussion about target lock on it’s own will be very difficult to untangle from the very toxic pointy bits that are such a source of lasting discomfort.

As it’s an RP PvP scenario focused on dueling, do the duels demand matched weapons? Where the question is skill, rather than arsenal, of the participants?
Does the challenged or the challenger set the weapons?
Daggers at dusk?
Jousting at noon?
Maces at morning’s light?