Can anyone give me a spot of advice on the best places to find a T4 Carpenter/Artisan? Some spawn rates would be nice. I already have one on my Carpenter Bench, but would really like a second for my Artisans bench. It has been literally months now since I have seen one, and my lady has not even seen one yet. Perhaps the spawn rates have been nerfed? I have been constantly checking Sepermeru, New Asguard, Flotsam and others, but constantly nothing! Any suggestions would be greatly appreciated.

I can’t talk to hard percentages of spawn rates but I feel like those 3 places you mentioned have particularly low spawn rates as of recent in my opinion. The places I would recommend are first the pleasure palace of Derketo to find https://conanexiles.gamepedia.com/Poscore_Nimblefingers the second place is the volcano to find https://conanexiles.gamepedia.com/Jaes'Pliis

I have also heard reports of them being found regularly in the darfari camps (not the summing place) but the smaller camps.

Also some interesting reports of black hand carpenters in sinners refuge of all places.

I’ve been finding a lot of names in the smaller camps around New Asgarth. Also Fleshtearer falls and the volcano. Maybe I’m lucky though. Just started on a new server and found Zaora of the Marshes on my first walkthrough of Seppermeru. No named carpenters yet, but on my last server I found named carpenters in the camp by skyholme ruins and the small camp close to the frost bridge.

Ok thankyou @Wak4863 and @Arsenalcontrol, they are a couple of leads I can follow up on. It is at the point where it has become very frustrating. I was genuinely not exaggerating when I said that this search has now been going on for months.

Oh and just going off my own topic a bit here, Arsenalcontrol it looks like we will be able to build that Bar you requested for us all very soon. Bring it on!

I know!! Can’t wait to build a proper bar (and restaurant) with the new dlc!!

i would go for 3 spots

Fleshtearer Falls spawns Hakka Sixfingers, my very favorite non-purge carpenter thrall. She also has a chance to spawn at the little 3-man camp across the river and toward the UC: Death’s Shadow Camp. Great call!

I would never reommend the volcano for working thralls

If you want a huge amount of fighters, then volcano all the way. And sometimes you can grab a worker in between…

The Den has a white-named carpenter, called: Poris Master Carpenter. Already got 2 of them.

Sepermeru is strange… I never got one there and then on one day, I got him 5 times in a row?!

Hakka sixfingers was 2times at the summoning place for me. Sinners refuge I got 2x Hodur the humble or like that.

Friends this has been some solid and welcomed advice, and I thankyou all. I have tried each place listed whenever I can manage the time, knowing it was only a matter of time until one of them gave up the ghost. So would you all like to know which yielded first?

@Ragnaguard you have it mate.

Ironically he spawned at Nordhoff, as opposed to New Asgaard. Thanks for the advice all. Oh and I still have at least 3 other Artisan Benches (Aquilonian, Khitan and Turanian) to get T4 Carpenters for, so I will continue to frequent all for now.

u can also put spare armourers in the artisan bench…

i use diana steelshaper , and than hammerblow in mine as they have no special armour to craft except the normal light/medium / heavy! they provide same bonuses as carpenters

Interesting. I knew of Alchemists on the Fermentation Barrel, but not that one. Same standard recipes on offer?

yup. exactly the same as carpenters provide and 50% off the materials to craft

And you can put them in ANY artisan bench. Also the ones from DLC.

Great for Diana Steelformer or other armorers who have no special recipes.

Niiice. I never had much trouble finding Armourers, and I stopped after three. A bit like Smelters…by the gods I find so many. I should start using them as the Furnaces fuel source in place of Coal.

except the climbing gear

Found another T4 carpenter in Sinners Refuge yesterday… Was looking for a certain T4 cook in there, but he was not there

Was back again in Sinners refuge and found a T4 smith at the first spots, which I captured… Then I went to the end of the cave, where another T4 dancer jumped at me, who I knocked down and couldnt care less, because there he was… Infront of me in his Asura armor 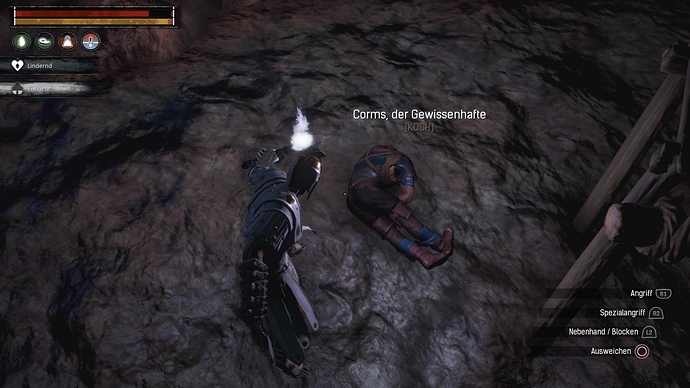 Again congrats to become a Chosen of Asura @Croms_Faithful

Sounds a good plan @Wolfrider4594. And I still keep the standard Armourers Bench to clothe thralls. I only give the scum the basics.

Sinners refuge and found a T4 smith at the first spots, which I captured… Then I went to the end of the cave, where another T4 dancer jumped at me

Wow you have a lot of luck there jot29. I dont really with Sinners Refuge, aside from Asuras anyway. I got Frigga Falsehope and a Smelter so for, but thats about it.

Thankyou for the kind words jot29, youre a top fella! Im sure he will serve you well. Although be careful…Crom worshippers arent usually know for being culinary mastercrafts.

I even got Grrr Legbiter from Sinners refuge