Remember the old greatswords? The old hammers? One Handed Swords? How fast and much better their combos used to be? I remember. I used to heavily rely on mods to reignite the flames these weapons had, but my absolute favorite weapon ever was the greatsword. A fierce, quick overhead downward slam, into some radial slashes, and then leaping up and doing another slam for the heavy attack. It was one of my favorite things to do in Conan. Now it’s stripped of its glory. It’s slow, it doesn’t have the impact it used to, and without mods to bring back the way it used to be, I don’t even use it anymore. It’s a tale of tragedy. How an exile lost his sword.

I know this is dramatic but I do feel this way. The greatsword was exceptional. So this is day one of reposts to maybe get Funcom to revert this glorious piece of dopamine and massacre to its former glory.

I feel that when they were doing the animation/combat rework on weapons, like the katana that was initially reworked with that awkward monkey stance and fluffy attacks but the almost immediately revamped again, the 2H sword got its new animation and everyone kind of went, “Meh” and it was slapped with an OK stamp.

Needs work but honestly in comparison to its old animation, it has a lot more control now with its attacks and that old final uppercut-leap attack at the end of the combo (while the animation was cool) was not really practical in any situation and nearly impossible to land on a target that is not an NPC.

There was a beautiful mod called Glory of Weapon Trails that made tweaks to weapons and the 2H sword was incredible in that mod. It was so fluid and would flow as you carve your way through hordes. It had impact to swings but also momentum. Plus, the special attack (kick button) was pretty much that leap-smash overhand attack from the end of the old combo that you could trigger on demand.

I much like the way greatswords are now. It actually feels like using a montante rather than a sledgehammer. Well, in a cinematic, rather than realistic, way.

I still have Conan from 2018 installed. The old client that appeared with release. I can make a video with all the old animations.

Another thing I observed is that the dancers in the Tavern in Sepermeru actually wore Set Dancer outfits. 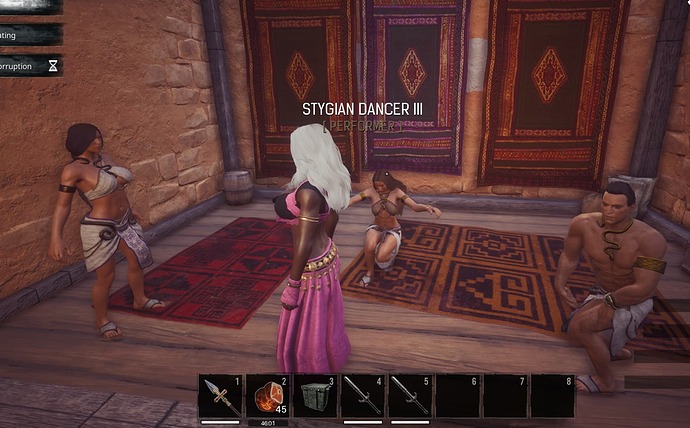 What we have now… 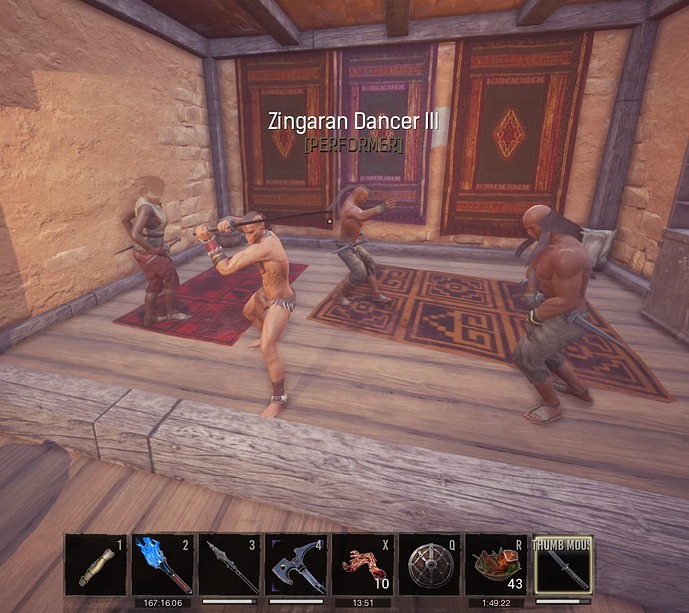 What’s the video for?

I can record the old 2h sword animations for example

Ae you going to make a mod of them?

Is that mod still around? I can’t find it.

No, the author yeeted it out of the park when Funcom announced 3.0.

What we have now… 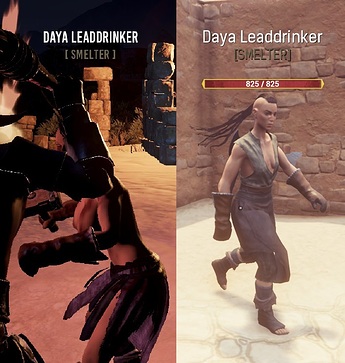 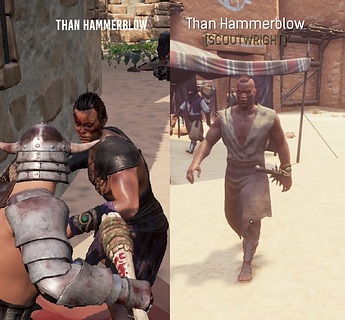 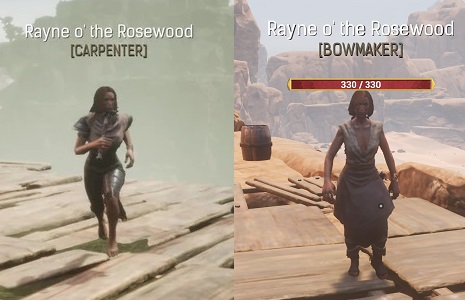 and many more, including the generous Beri. 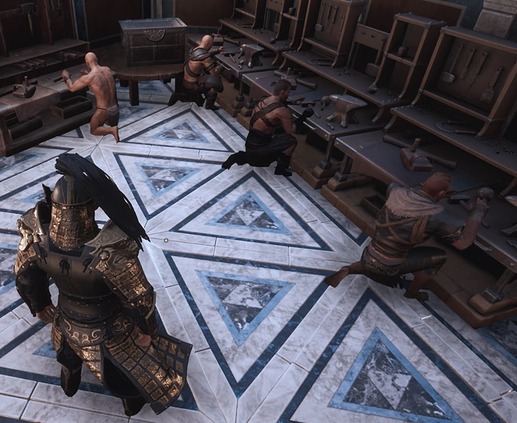 And the Siptah exclusive is becoming the same.

This is just sad…

I’ve always felt one of the benefits of legendaries is some should have different animations. Perhaps could bring back some of the old combo’s on particular legendary weapons?

Yeah. The price we pay so as not to accidentally murder a T4 artisan is having them look lifeless and colorless. Heck, even some Taskmasters opt out of the Hyperborean Slaver outfit in favor of the apron.

I did concept some ideas to dressing up Faction crafters so as to be distinguishable yet fit in their faction back in the day, using existing in-game assets so it’d only be a matter of matching the clothing IDs with the NPC ID’s in the database. Luckily, I still have some of them saved to use as an example: 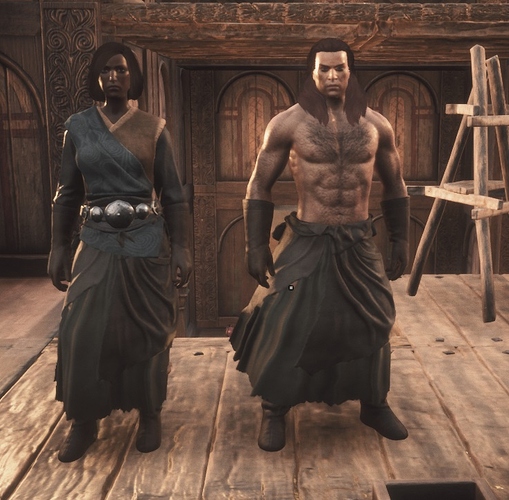 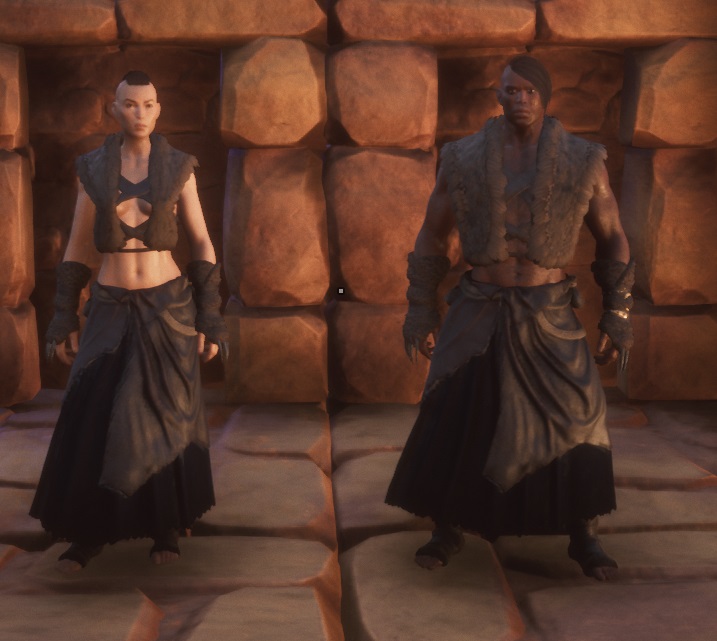 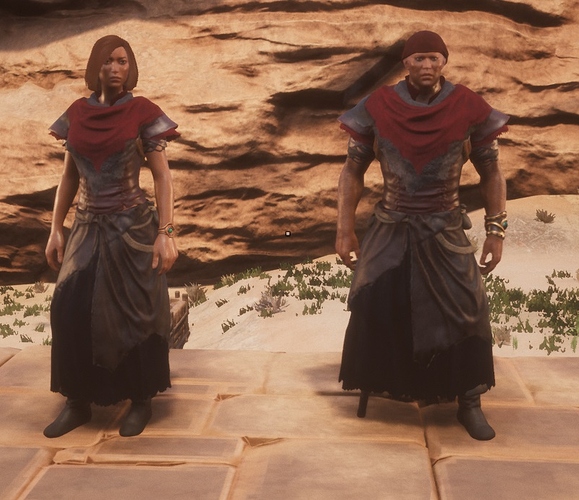 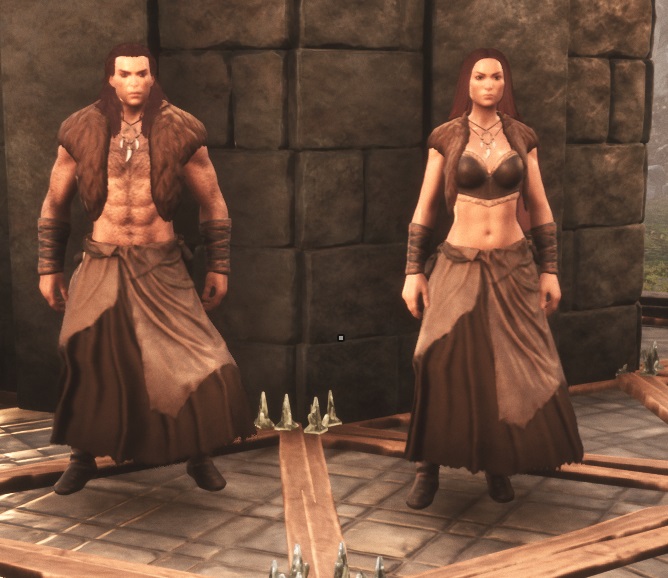 Here, for example, would be Alchemists for the Forgotten Clan, Dogs of the Desert, Black Hand and Nordheimer factions. As you can see, each of them shares the Kambujan Shaman skirt (dyed in Faction thematic colors), but is otherwise dressed in Faction fashion. Using similar ideas, you could make each crafter easily identifiable at a glance, but still look like they’re part of the faction.
1 Like
Trappist01x September 22, 2022, 4:18am #14

Day 2 remembering the greatsword. Tried it some more earlier today and it was really useful when swarmed by a bunch of adds, but I still miss the old iteration.

Day 3: Found out there’s a running L2 attack. lol. Updating this thread about how good the old greatswords were.

Day 4: Just updating this. Not much to talk about.

I still have Conan from 2018 installed. The old client that appeared with release. I can make a video with all the old animations.

Remember the old greatswords? The old hammers? One Handed Swords? How fast and much better their combos used to be?

I’m actually still trying to figure out what you’re talking about. You mean the stanced pauses at the end of most combos and some attacks… where the character just kinda stands there uncontrollably?

If that’s what you mean there have been many threads asking for some form of “animation canceling” in order to… well, yeah, cancel those. Funcom and/or the @Community never seems interested in implementing it though - and many PvPers claim they shouldn’t either… I PvP myself and don’t think it would be bad - especially if “cripple” were removed too. It would certainly speed up combat - and that sounds pretty yummy!

Anyway, just kinda wondering what you’re talking about and @SirDaveWolf isn’t coming through with the example animations so I thought I would ask.