I’ve gotten to the point on the new server I’m playing on with a co-worker that I now have a bunch of thralls standing around still with their default names, I never really bothered much with it previously but my co-worker has started naming his thralls after characters from the anime Bleach.

So my question is, how many of you do the same and what do you usually name your thralls after?
Is there usually a cohesive theme you follow or do you like to mix it up?

Even though i use as few as possible , for some crazy reason i always name my 1st t3 dancer (always female) “b 1 t c h”, my 1st named volcano fighter “Noob” and the one thrall that exists in skelos entrance to help me out (cause i load slowly and i am killed as i exit volcano dungeon by the two npcs guarding the entrance-so i need some help to get stuff) he is always named “Justin Case”… Other than that i have no other abnormalities upon thrall naming…

On my current play in limiting myself to only one of any named thrall, and 2 of each gender for generics, which I have to name

I have one who’s named after my original morrowind character, but the rest I’ve tried to give them names that somewhat fit the setting, so I have a guy named Braken the Hammer who umm, uses a hammer

It’s can be a bit hard to get super specific with names sometimes though because a lot of the source material is vague about certain aspects, we get country names, but very few city names, and titles are more common than surnames

Greco/Roman deities, famous military leaders, Irish lore. Those are my main naming guidelines. Toss in a few from the Vikings movie series, like Lagertha Lothbrok also.

Most case I just add number to their default name if I got multiple of them. It only when I am happy with their stat, I would try to name it with it main job I think of having it do.

I say name them all Steve. Even the ladies.

I name them after characters from my favorite books.

My wife and I name a lot of of our thralls I have named several female’s over the years ITTY-BITTY from a high school nickname for some one. Some times use 1.0 2.0 ect. On others I don’t want to forget there original names. My wife tends to use the same names from server to server which is confusing to me. Right now I have a XX suffix on a bunch we need to bring to new base she likes Two Step for a variety of animals at different server horse hear a panther there.

I use League of Legends names on thralls lol

And naming T1’s and 2’s after existing Named thralls is also fun as attackers don’t know the difference till they die (thrall or player).
If, one day, there’s an option to knock out and steal placed battle-thralls from players, that will be even more of a fun twist

I name only the thrall that reach lvl 20. If my thrall hits lvl 20 it is retired. It never has to follow me again, I see no reason. Their names are totally random and their outfit is something light, since they don’t have to follow me anymore. All they do is emptying my thrall pot every day

. The students are renamed like…
Spinas the student, Mei the student, Berserker the student, etc…
The thralls that I capture wait in a chest until I decide to make them students. Fighter chest, Archer chest, workers chest. To the workers chest I put bearers, dancers and crafters I don’t need. In pve our thralls in base have no danger at all, so it’s better not to place them unless you need them.

I give them names that just happen to think of such as 2 very ugly Vicious hyenas in D&L, I called one Hello Handsome and the othe Hello Beautiful, I tend t be very tongue in cheek lol

I give them names of friends encountered in the exiles land that have left somewhere else , some I keep them original like my captains , bandit leaders and my pets are manga inspired

I unbox just one fighter, and a couple archers on guard. I name my thralls based on their behavior, like; Swing and a Miss, Cripple Head, Sticks to Rocks…etc

I name them, randomly, based on what they do and how they look. And T4 thralls keep their name, unless when for instance a female is ‘Johan Farseek’ or Colvric the Blade’ I rename them ‘Johanna Farseek’ and ‘Colvricia the Blade’

The coolest way to name your companions I’ve seen is to make jokes to your teammates, guild master or in my case, the game developers (combine the first 3 letters of the names to get FunCom).

Tower of the Elephant - the Playground 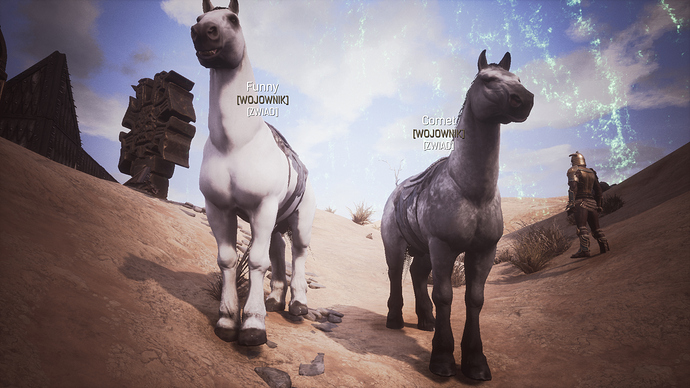 When it comes to humans, I give them longer names, such as:

Before they fixed the thrall follow, when they used to ram right up your butt when you stopped, I called my go-to follower ‘Lemmiwinks’.

Still thinking up a good name for the current ones. I must admit tho, I was tempted to just call em all Bruce, like Glurin with their Steve’s.

Might end up just with a bunch of Minions names. (Bob, Dave, Stewart, etc)

So far I have been naming them after friends, past and present, or family. I include last names too, sometimes with a nickname I make up based on something about the person whom I named the thrall after, like Esteban “Tsukinage” Bromden. 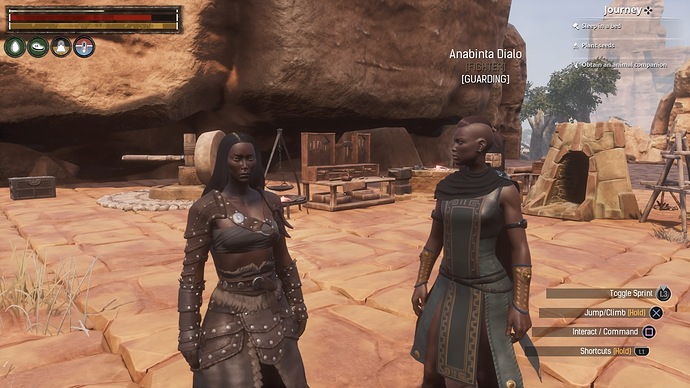 I guess this does not say much good about me, since it seems I want to boss all my friends and family around XD