A place to share screenshots of your shelters from humble sandstone huts next to the river to epic castles in the mountains.

I will start it off with this beautiful picture I found of a ship someone made. It’s not my shelter but once I saw it I just had to share it! It was created by Deamo.

61 Likes
I suck at making tree houses, please help
Examples of steampunk architecture?
Conan the pirate and other changes
My Home : What ya think?
Since they moved my post..Sorry, a live build is NOT "Fanwork"
Boats / Water Building Enhancement
Mannequins would be an awesome addition to the exiled lands
gengis May 22, 2018, 2:27am #2

This is the new base I started building in the Highlands on the weekend… still work in progress. It’s the third base… ahem… fourth base I build on my current game, counting the starting one… or fifth counting the one that I built and then decided to tear apart to move to a better spot lol

I suck at making aesthetically pleasing buildings… I’m trying to move apart from just making squares/cubes and that stuff, but it’s hard… lots of trial an error lol

I’ve tried using Fortify to do some mockups and I always end up ignoring them and doing whatever… I prefer things to grow organically, and they end up always sucking lol 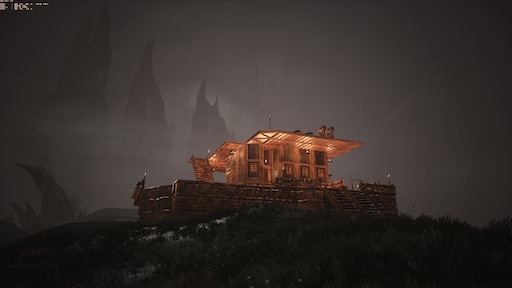 I wish for a TFC command lol) 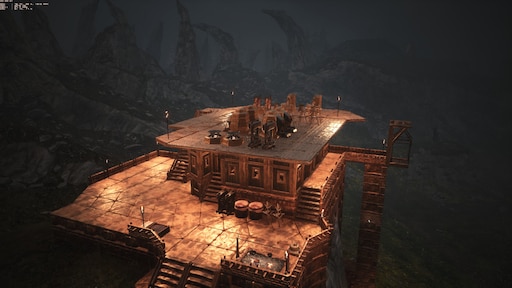 View of the cozy interior 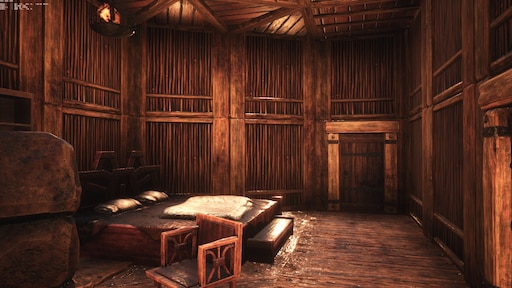 @Leeux it definitely does look cozy! I really need to work on the inside of my bases. Being on a pvp server I build next to a cliff or in a cave then just ram as much as I can into the smallest space leaving most of the floor and cliff wall bare

Much better than my first base!

@saorsa thanks, will upload some more pics when i get a chance. A little guttedas the trees at the back despawned which ruined the view a little

These are super awesome, thanks for sharing!

We are actually planning to do a new format of streams (if there is enough interest) for showcasing some of the coolest community made buildings/settlements. We’d visit those live and chat with the creators/owners on stream about inspiration and ideas behind building them.

So please, don’t stop posting and keep those coming. If possible it would be great if you could mention if those are on a private or official server.

@Jazrek any more pictures of your epic build?

This is another ship I built a while back 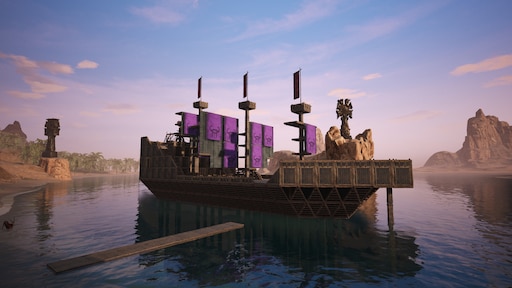 These are still somewhat a WIP as gathering takes quite a while with it being an official server. Both are designed with themes that are to fit with the surrounding area.

Witchfire Tower is being redone with Black Ice & will then be decorated. The design is based off the circular buildings in the background at Asagarth, and a bit of a pagoda style layering.

Daytime (Edit: I totally posted the wrong link here, was meant to be daytime of the tower) 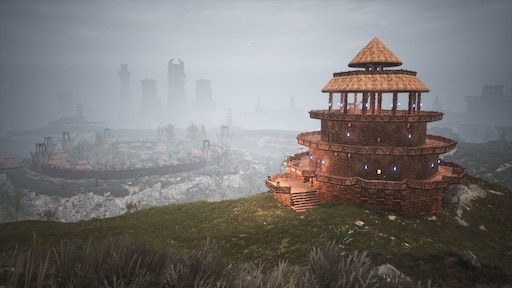 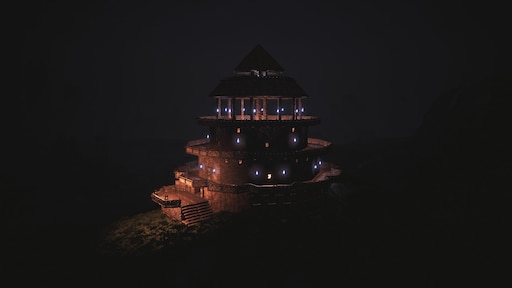 This other one was the starting base, kind of central on the map. It still needs a lot of flame lighting to fit the style and then some decoratives. It’s a desert fort with egyptian altars for the religions and pyramids containing the map room and wheel of pain. I will redo all the altars and pyramids into Sandbrick texture eventually. 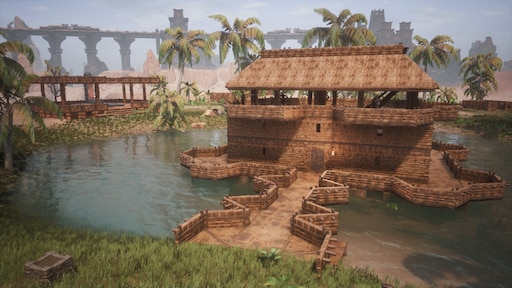 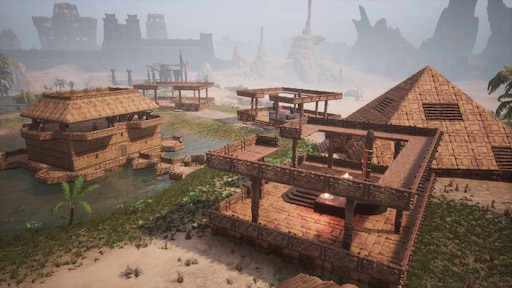 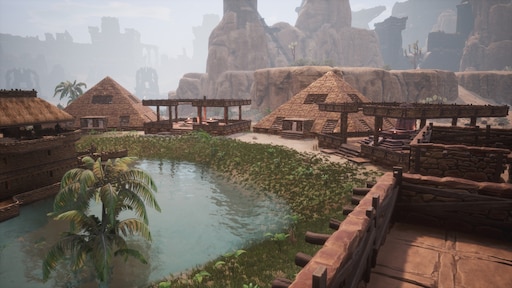 Dd_Pe5dXUAA2Ou7.jpg large.jpg1920×1080 328 KB
Managed to get on last night and expand a little. Will try and get some closer shots once it fully kitted out 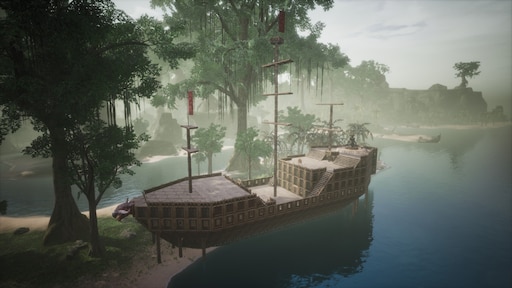 
Haven’t added any sails yet not sure what color? 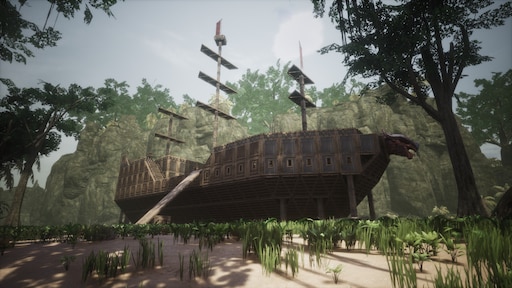 I tend to build LARGE buildings to enclose craft centers and map room.

A birds eye view, the place is large…

Then entry hall facing the main door, map room door is behind me.

Close up of the lounge area in the front entrance hall

I love the look of the insulated wood interiors

EDIT: I completely forgot to mention that this is in a local dedicated server (same as solo play but using the server package to have the world persists a bit more.)

This is the new… ahem… “Hiring Office” I built near the black ship (don’t judge me, I need better thralls at this point

but that one looks bad ) 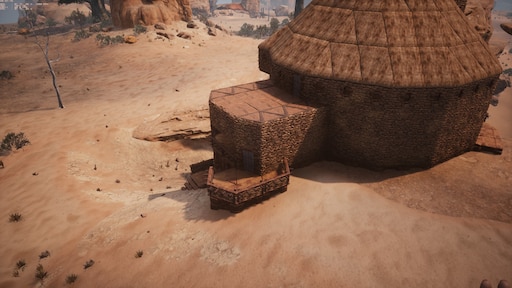 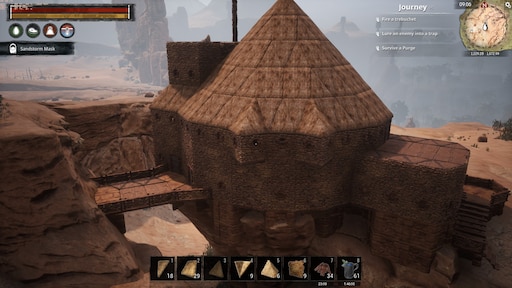 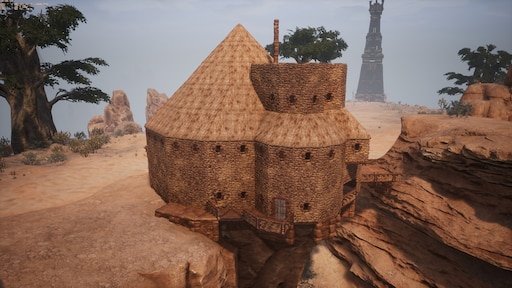 The interior is not finished yet, but it already has the proper accommodations for the sl… ahem, I mean the “students”

And I have a T3 “teacher” supervising the whole operation already

Of course, the circular room with the big pointy thatch in the middle is the where the wheel… ahem, I mean the big central “class room” is

EDIT: After I finished placed all the foundations I realized I have a big hairy and many legged neighbor lol Hope she doesn’t mind me taking a bit of her lawn for my “university”

BTW, I have the biggest luck in picking all the places nearby world bosses… without realizing it