You do realize that the Fencer kit only increases ‘light’ attack damage while decreasing ‘heavy’ attacks right? The Master Weapon Fitting he used increases ‘all’ damage as well as AP.

I find the 1h mace to work better on my thralls than the 2h sword in all situations, especially against groups, but that is just my opinion.

Maybe vs unarmored targets it does more damage, but the master weapon fitting is simply the best. 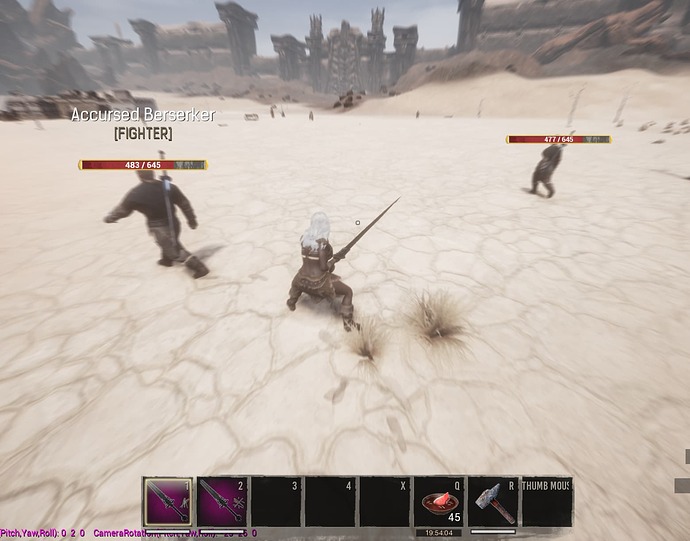 spawn a thrall and let it attack with it.
I don’t think it matters with Thrall.

The SoC is pointless for personal use anyway.

If weapons have a bonus damage (poison, acid), the Fencer attachment is simply the better choice in my opinion.

It was nerfed before…now its nerfed to hell?..Funcom do you have any clue how many hours veterans have put into farming the skeleton boss’ to get this thrall weapon?

@Marcospt Maybe u should have read the whole context not just picking this part out.

If someone has a pre-nerf Sword of Crom, will it retain its former stats? I mean thralls can use it.
Is this nerf applied only to the new ones, or to all, already aquired ones too?

That’s a good question @rolee9309. The change will likely be retroactive to all SoC weapons in the game since it’s not the stats of the weapon that are changing, but who can use them. However, I will definitely kit my current swords, just in case.

Oh yeah, sorry. It is an ability, not a stat, sooo it is unlikely to be untouched, but let’s hope!
I only have one, so I guess I’m also gonna stash it.

I’m not for nerfing Sword of Crom considering how rare it is and it’s THE SWORD OF CROM!!!

So instead of nerfing it, what Damage/Armor Pen and attributes should a sword like this have?

I think the Sword of Crom should have Sunder b/c the Cimmerians believe Crom is responsible for earthquakes.

And I think the weapon should give Berserker Draught when Health is reduced to 25% since Crom likes Courage in his followers to “strive and slay”.

Drinking this potion will make the imbiber fly into a berserk frenzy, increasing damage and armor but prevent healing. Once the effects of the potion wears off, the imbiber becomes fatigued. Status effects include: +20 Strength temporarily (lasts 15...

Then it would be nice if the Sword of Crom had lightning effects long it’s blade when the Berserker Draught is active.

Yeah , just jumping on the wagon , of why is there any nerf to the sword of crom , which from 4 years now has been a thrall only weapon since it took all the players stamina , to now being useless , while in the meantime having Carnage , that was originaly not even yeildable by thralls , actually yeildable by them and even doing damage with it ? was this nerf on the wrong weapon ? is it a bug fixing that went wrong ? I can’t understand the reason behind it other than being a mistake somewhere , maybe the 15 crom swords I farmed are clouding my judgement or is it the time spent doing so … ( let’s remind how long it is to actualy find one , I wanted to say hard , but it’s not , it’s simply long since the rng % are so low )

I don’t think its useless. Seems that sword of Crom is one of those glass canon builds they mentioned. If you go 20 corrupted Strength + 20 agility, with proper all stength buffs and master fitting on sword of Crom, you can easily do 1k dmg with roll + special attack (stamina free due to Rolling Thrust) and you have stamina to 5 roll attacks since roll stamina cost is % based.

It does. Thralls seem to combo alot more withit, which in turn starts stacking sunder, which increases damage duebto lowering the armor rating. Good choice. On Siptah i delve until i get the gravebane, and then my thrall destroy indead as well!

Firstly. Why should slaves be equal to animals? Can animals wear armor? besides driving?