As we steadily advance towards the full launch of Isle of Siptah, we’re now ready to give you an early taste of our upcoming new content drop. Update 2.4 will expand the available land mass on Siptah to the South, with three new biomes full of new sights, adventures and dangers for experienced Siptah players and newcomers alike. 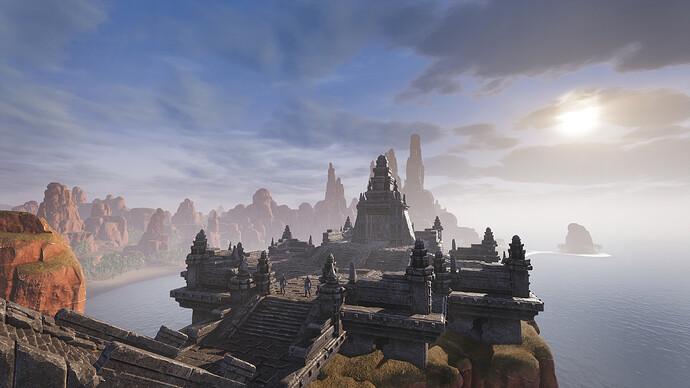 On the east side, the savannah, a massive open area hosting rich wildlife and the ruins of an old capital of the Grey Ones, with a secret lurking within its confines. On the west side, the ashlands, the soot-covered volcanic grounds once inhabited by the First Men and now only hosting the remnants of this once-proud civilization. And in the center, the floodlands, an in-between area with tall cliff formations and lush and overgrown plains that will be prime locations for builders and adventurers alike.
These new lands continue the work established in our previous update, adding to the Isle of Siptah 47 new NPC camps of varying sizes with repeatable activities, trainers and surprises.

To couple the release of these new biomes, we have also worked on a series of optimizations and improvements to the lighting and skyboxes of Siptah, to make these new landmasses shine like never before on Conan Exiles! 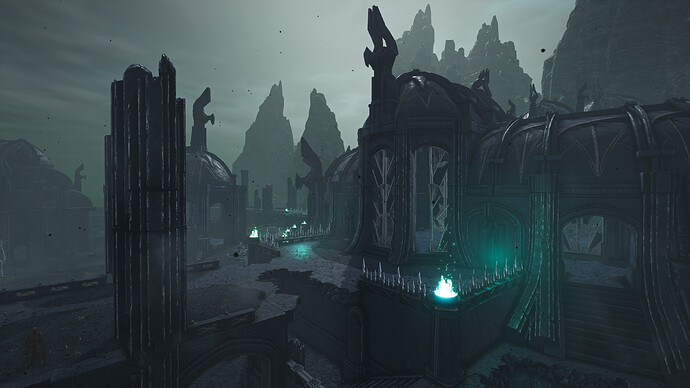 Another new addition coming with this update is a new religion! Zath the Spider-God joins the pool of available religions in Conan Exiles both on the Exiled Lands and the Isle of Siptah. Summon Zath and a swarm of its children to bring terror and destruction to your enemies! New NPCs, placeables and items have been added to the game for those who chose Zath as their deity.

New with this update is also our new Character Transfer feature! With these new options you can now transfer your character between Official servers, between unofficial servers, or from an Official server to an unofficial server keeping your name and appearance, level and all items in your backpack. Even between the Exiled Lands and Isle of Siptah! (Please note: This is currently a W.I.P. feature and it’s not fully implemented in this initial Testlive build - we are still testing the feature so please use at your own discretion. To transfer to or from the Isle of Siptah, ownership of the DLC Expansion pack is required)

Along with these new additions, we have also worked on a series of oft-requested improvements and rebalancing aimed at PVP combat as well as other systems. Tons of new performance optimizations, a myriad of animation improvements and many UI and quality of life additions, along with many other fixes, complete this package. Update 2.4 is one of the most ambition content updates we have released to date, and we can’t wait to let you try this early build. If you do, please share your feedback with us and report any issues you might have!

Thank you for your ongoing support, and stay safe!

Three new biomes for the Isle of Siptah! 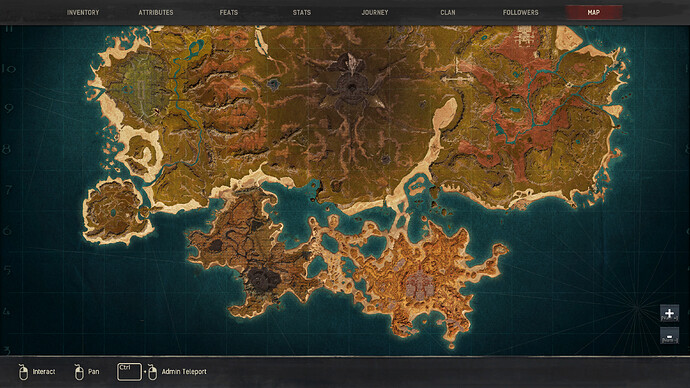 The savannah, the ashlands and the floodlands are now available in the Isle of Siptah! These three new biomes are populated by dozens of new NPC camps, two new factions (The Grey Ones and The First Men), new activities and new loot!

Improved lighting and skyboxes on the Isle of Siptah! 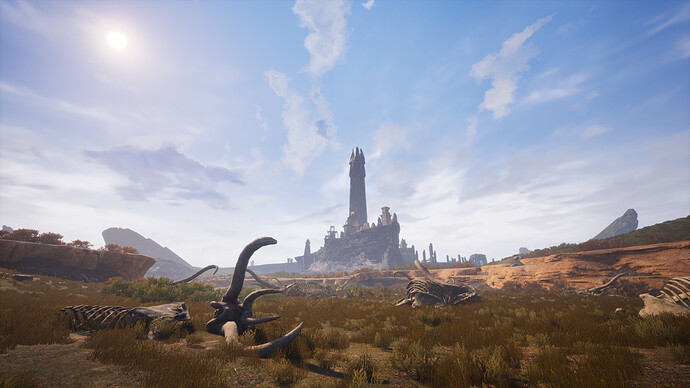 New lighting effects and improved colors, along with many optimizations, have been added to the Isle of Siptah skyboxes, to make your adventures through the new biomes truly memorable! The difference is… night and day! 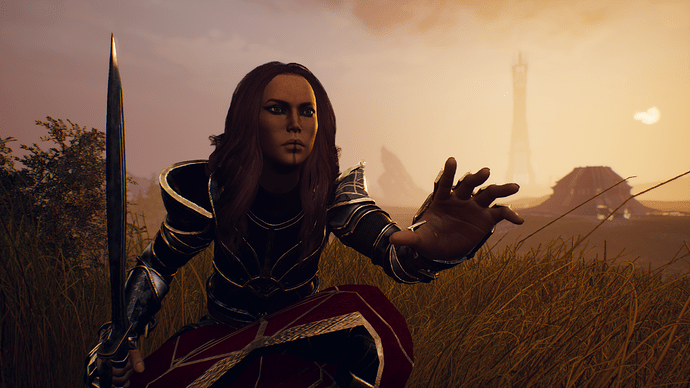 dont look here this is not an easter egg2560×1440 4.85 MB
Here comes Zath, mighty Zath! Destroys whatever with an avatar wrath. Spins a web any size. Catches foes, in Conan Exiles. Look out! Here comes the Spider-god!
(Along with new item sets, placeables, NPCs and tons and tons of little critters). 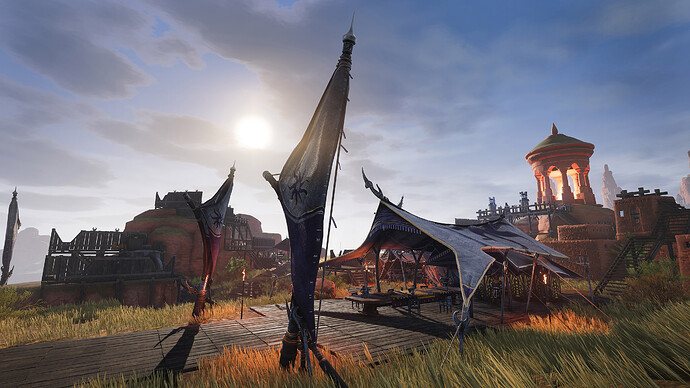 Siptah_mercenary_campb2560×1440 783 KB
New revisions to combat systems with a reduction of mounted combat damage, dodge improvements and re-balancing of bows and arrows! Swimming does not drain stamina and you can engage in 1-handed combat on water! And the hunger and thirst systems have received a balance pass to make them less frustrating and improve the gameplay flow! 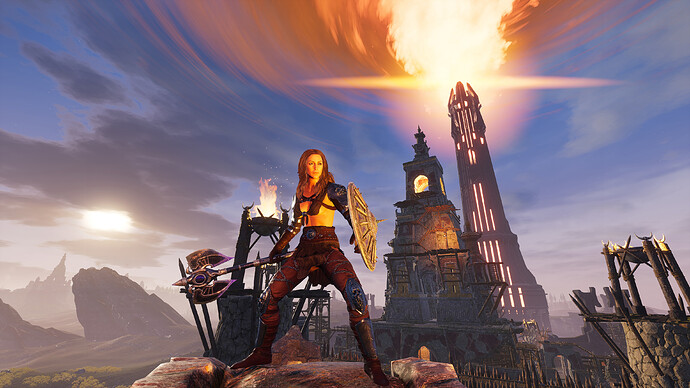 Siptah_Camp_Evening13840×2160 4.14 MB
You can now transfer your character between Official servers, between unofficial servers, or from an Official server to an unofficial one (Note: Unofficial servers can opt in or out of this feature!). You’ll keep your name, appearance, level, feats and backpack inventory while leaving everything else behind. Even within Exiled Lands servers, or from/to Siptah!
(Please note: This is currently a W.I.P. feature and it’s not fully implemented in this initial Testlive build - we are still testing the feature so please use at your own discretion. To transfer to or from the Isle of Siptah, ownership of the DLC Expansion pack is required)

We are aware that not everyone wants to install or has space for two full installations. For those of you who don’t want to play through the additional TestLive Client, you can still access the TestLive servers through our old method.

Here’s a hotfix to address some of the issues found on the previous version of the update. Please reach out if you have any feedback to help us keep improving.

As always, thank you for your continued support.

We bring to you a new hotfix release for the Testlive version. Please feel free to share your feedback with us.

As always, thank you for your continued support.

Added the following lines missing from the initial notes, under Quality of Life Improvements:

We truly appreciate all the feedback provided so far for this TestLive build.

We’ve also just released the first revision for Patch 2.4, which includes plenty of fixes and tweaks!

[Update: April 21, 2021 - This has been disabled on the TestLive Branch and will not be present in the 2.4 Launch. We’ve made the tough decision to shelve this feature due to major last-minute issues cropping up during testing. We hope to revisit this feature in the future. Sorry, Exiles. ]

Fixed a typo:
In combat:

This change varies depending on the type of bow, with the Reach of the Red Mother having received the most significant increase.

Added the following lines missing from the initial notes:

Interesting stuff. I might have to actually get on the test servers to check out the new server transfer feature.

keeping your name and appearance, level and all items in your backpack

Please note:
Server transfer is a feature still being worked on. We do not recommend testing it at this moment, as many things can and will go wrong.
We are actively working on it and will make it fully operational during the Testlive period up to the final release. Until then, be aware.

all the time, should we ever add pineapple on pizza to the game.

May it never be so! Crom would curse you all for such an unholy combination.

Adjustments to Ambrosia and Purified Flesh:

So in other words Ambrosia has been nerfed…HARD!? There is no sugarcoating this change. This is a bad move, and I would urge you all to reconsider this.

Really, you should try pineapple on pizza. It’s delicious.

How dare you suggest such barbarity?!

I agree. In the beginning, religion was a major part of the game and not only worth your time as a player, but nearly a necessity because of the superior food and miscellaneous items you could craft in the altars. Beefing up some of the holy armor pieces is good, but honestly, religion should be a much larger part of this game than it has become. A god bubble shouldn’t be the only reason to use it.

so funcom kill archery in pvp?

and still not fix bug with stagger and arrows?

Guess I’ll have to wait then. But I guess you’ll end up with the same issues I had when implementing my mod in the first place.

oh wow i had been pushing for those wheel of pain visuals since the beginning. whooooooo!!

I hope you are going to fix the problem of archers when their arrow flies right through stunned target.

I’m pleased! I love the changes and the new content!
Thank you Funcom!

Mounted combat rebalancing? Unreal. The crying farmers running around with 200 health finally get their way. They should be adding to mounted combat not taking away from it. Funcomm just keeps nerfing the best parts of the game.

Added visual feedback for building stability. You can now see at a glance the structural integrity of your building before placing a piece by checking the color of the placement brush!

It would be good if the repair hammer had its indicators change color based on damage percentage.

it feels like Mitra has a huge benefit compared to other religions if they unerf it. If they revert it back they need to increase the cost for the Ambrosia, it is very easy to make and way too useful.