I just noticed that my epic Darfari light armor was reduced from 240 to 160, making it now virtually useless against anything except the easiest NPCs. OK, I can understand that they wanted further differentiation between the three levels of armor, but wouldn’t it make more sense to increase the protection of medium armor and then the protection of heavy?

Funcom, you just have a way of really annoying your players. In the interest of “balance” you take a meat axe to everything. Haven’t you ever heard of a scalpel? i have over 2200 hours in this game and I am betting really sick of all the bonehead changes. I stuck with you last summer when you all went of vacation and left us with a game so buggy that it wouldn’t even qualify as a beta. But now I’m sick of you changing everything and making things worse than the way they were before. I have no intention of rage-quitting, but please be advised that when I find another game to be interesting I’m out of fhere.

Yeah it sucks, some of the light armor looks good but doesn’t protect against anything

I got alot of hours aswell, and this game is just broken now.
(if it was worse at some point please remind me).
Wearing EF Darfari with Medium Gauntlets ( Aesir is the only option) and medium chest works.
Taking EF Darfari and EF medium Chest and Pants is fine.

That is fine. But the rest…
Me and probably most of the players have no words for this.

The problem here is, they can’t increase the ratings of medioum or heavy armor much more or they risk making heavy armor players invulnerable. You can get around 80 % damage reduction with the best heavy armor and stuff. Increasing that much more would be difficult.

On the other hand, with the best light armors (with one piece of medium) you could get to ~65 % damage reduction. The difference between the best light and the best heavy wasn’t very big, and since dodging is much easier in light armor, there was little point wearing heavy.

Take a look at your total damage reduction on the Statistics tab. How much is it now with your armor? Is that really “virtually useless against anything except the easiest NPCs”? Since dodging is supposed to be a light armor user’s main defense, the number showing on your Statistics screen is the amount your damage gets reduced when you screw up a dodge. The damage reduction is still 100 % every time you dodge successfully.

I’ve been a light-armor user since Early Access, and I think light armor used to be too good. It really needed to be cut down somewhat. It wasn’t done for you, but for everyone playing the game.

On the other hand, with the best light armors (with one piece of medium) you could get to ~65 % damage reduction. The difference between the best light and the best heavy wasn’t very big, and since dodging is much easier in light armor, there was little point wearing heavy.

Take a look at your total damage reduction on the Statistics tab. How much is it now with your armor? Is that really “virtually useless against anything except the easiest NPCs”? Since dodging is supposed to be a light armor user’s main defense, the number showing on your Statistics screen is the amount your damage gets reduced when you screw up a dodge. The damage reduction is still 100 % every time you dodge successfully.

And don’t talk to me about dodging. I dodge all the time, both in light and medium armor. So your so-called “100%” damage reduction is meaningless.

To sum things up, there is no reason in God’s green earth to nerf light armor from a 15% or 16% difference to a 21% difference because originally the damage reduction between all the armors was the same.

It’s this sort of mindless nerfing on the part of Funcom that really irritates people.

True but with all these 100% armor pen weapons n stuff to increase armor pen in game now I honestly doubt it would be a problem if all armors defense was increased more,even if heavy was at 90 95 %reduction.

The change makes sense, as wearing light has a distinct movement advantage, and really the only reason one should be wearing light is for the att bonus and not for armor rating. Medium should be a happy balance, decent rating %, and serviceable roll dodge. Heavy is really for thralls, with the occasional gambler in PVP. thus it should be tanky, but buffing it, then roll dodges would be useless. @Kapoteeni is correct, the best damage reducer is not getting hit. And light is the best for that hands down.

And what about PVE?, now my darfari character will have to make his tent in the summoning place and never visit the north. Seriously, who is the think-team behind all this?. And, why did this make it in game in the first place if they are so sure and confident about the change?. Devs are changing ALL rules mid-game. Imagine that on any other field. Like, what kind of confidence can we keep on them about what will be changed next?

This is not survive, build, dominate anymore. It’s “adapt to whatever we decide next”. Not the perfect direction I would choose, still it is their game to do what they please. But don’t be surprised when you read what players complain about in the forums. Sorry if this sounded harsh. Not a good day for my darfari boy.

But heavy armour is silly. Wolves just tear you to pieces with their armour piercing fangs.
Elite sabers pounce for 3000 unmitigated and you even can’t block it. In heavy armour you still get destroyed. While on the trip to your doom it ruins your encumberance.

Thick armor plating only adds +3 armor per piece, or +15 for an entire set. That’s almost negligible.

The change makes sense, as wearing light has a distinct movement advantage, and really the only reason one should be wearing light is for the att bonus and not for armor rating.

Light armor does not have an intrinsic movement advantage, but with light armor you can carry more stuff (because it’s lighter. Duh!). If you look at your Attributes screen, at the top it will tell you how much your movement penalty is for the total amount of your weight, armor + stuff. That’s why I like to farm wearing light armor (and I use Darfari for the role play.) You can also get the strength advantage from some types of medium armor, so it’s not necessary to wear light JUST for more STR.

Interesting ENC strategy. I completely disagree, but it’s something I hadn’t considered. Now it must indeed seem useless.

It’s completely op in PVP. The roll distance makes like armor the go to choice for pvp. The meta is Darfari light with a spear, so, unsurprisingly, in the pvp patch, the spear and darfari light get nerfed.

If heavy armor was super strong, everyone would need one of these 100 % armor penetrating weapons, making all other weapons obsolete. On the other hand, these 100 % AP weapons would make heavy armor obsolete.

I suspect that one of the problems with heavy armor currently is the fact that it can be pierced too easily. Especially since we just got new, improved ways to add more armor penetration to our weapons. My gut feeling says that it would be best for the game if ways to negate armor were significantly reduced; one of the simplest ways to make armor relevant is to remove tools that make it irrelevant.

@Fortyniners: I think 44 % damage reduction for light armor feels quite good enough. The reduced mobility of medium and heavy armors should be rewarded by a higher proportional damage reduction because light armor has the advantages of better dodging and lower weight. I can definitely accept this change and find it reasonable, even though I was among the “losers” in this update.

Nerfed eh? Look at this screenshot I made: 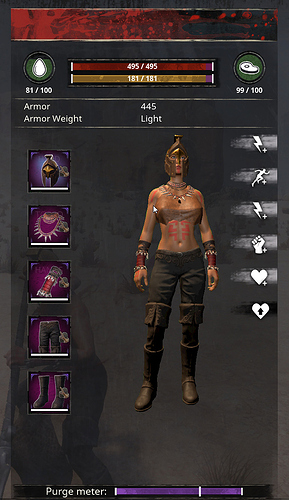 445 Armor on light AFTER the patch. That’s over 60% damage reduction. Can tell you the real value when I’m home. You can even carry chest and pants medium, rest light.

I will make another post for a PvP build after the „big nerf“ everyone is claiming it is to be.

Did you craft those, before or after the patch?. I mean, the base was crafted after the patch as you say in the post?, or where they old pieces upgraded?. Sorry if this question seems dumb…

I will give more details when I am home from work

Light armor does not have an intrinsic movement advantage

It does have an intrinsic (adjective-belonging to a thing by its very nature) movement advantage over heavy and medium. It gives the best possible movement of the three classes of armor, while still giving temp protect and att bonuses that are equal (there are a few special recipe armors, but for basic armor, light is “fastest”).

The “nerf” to light armor was obviously made with the current PvP meta in mind. If ones playstyle in PvE is to tank up enemy hits, light armor is not recomended … sounds about right, doesn’t it? 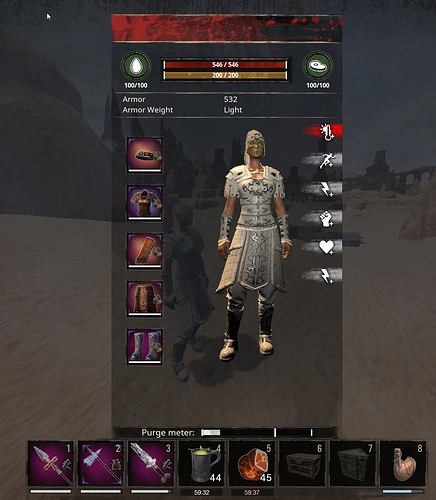 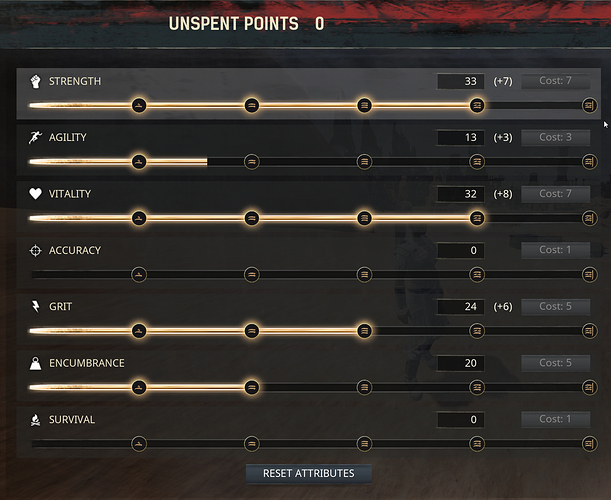 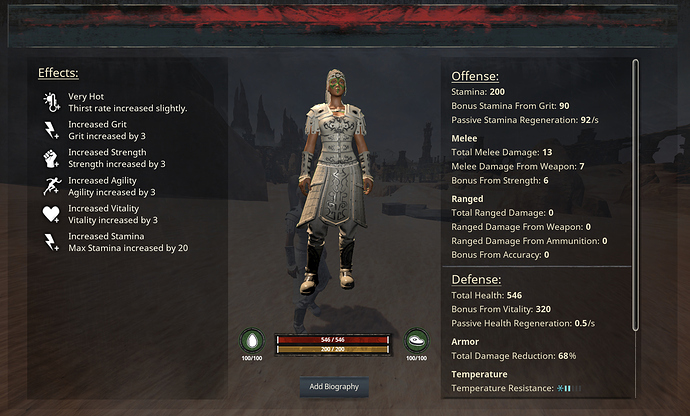 On top of that this is only DLC stuff, so you don’t need a specific T4 armorer.