I thought I’d share here with you some techniques how you can build “more special”. So you can spice up your buildings where not everything looks like 08/15. These tricks will work without mods, so it should be possible on all platforms.

Raise a foundation by a quarter

By “laminating a foundation” I mean placing a ceiling element directly on a foundation so that it can be considered a floor.

Foundations can be divided in half by pulling a fence foundation through them. After an update it is not so easy to do it but it is still possible, at least in singleplayer or on private servers. The following steps were done in singleplayer without mods.

Align Foundations from "Riders of Hyboria"
You can use the bright vertical column on the left as a guide for the orientation of the planks (circle and arrow). When this clearly visible column is on the left side, the planks are aligned forwards. 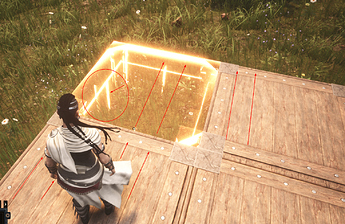 This thread should be pinned.

Man you’re awesome! I known about the first technique but I’m so happy to discover the others! Thanks a lot

Nice! I am ashamed that when i encountered these things i only saw them as bugs. I only used the slightly different height of the fence foundation to produce irregularities but did not see the potential.
Thanks for sharing!

I didn’t think these tips would go down so well! I appreciate that very much, thank you!

This here, this deserves thumbs up. Thank you.

Thx. But I guess thats PC or? Because when I watched the stream about the new tree-house foundation, Jens was able to RAISE and LOWER the foundation on the spot…
Is there a button/way todo that on PC?

In my settings (I suppose this is default) you can raise and lower a single free foundation (not snapped to an other piece) by pressing ALT + Mousewheel UP/DOWN.

I often see people asking questions about controls on this forum, whether on PC or console. I do not understand, everyone has control setting menu, that’s the basis to consult and eventually define the controls when you start a game for the first time.

I’m sorry I don’t mean to be rude but I don’t understand. Everyone is waiting for everything to be served on a platter.

Yeah and thats impossible at consoles

I can only raise or lower it, when I push it against a cliff/rock/whatever.

Looking here on “Adjust pitch” for consoles, it says R2/L2, but that is just rotating the pieces itself…
https://conanexiles.gamepedia.com/Controls
And adjust height (what would be SHIFT + mousewheel) isnt even a category for consoles… Damn it.

@Kearsan I didnt wanted to know the PC controls, as I play on console… It was just a reminder, that console players cannot do that (but I forgot to mention the console).

Funcom didn’t made a control settings menu on console? That’s a shame!

They did, but you cannot raise/lower it.

So what should I do there?!? Looking for a control which does not exist in the first place? We would need 1-2 extra keys (alt or shift) do be able to do the same thing…

WOOOOW!! You are the hero of my day. I have to crouch for that…

And its not even in the Wiki…

@Multigun can you add that for consoles?? That you have to crouch for lower/raising building pieces

And I will give it a test in the evening, to see if it works… Because some PS4 players said, it didnt… But thats >1 year ago.

Cross button? I place with R1.

But yeah, CROUCHING (which triangle does) really lets you raise and lower it. Probably for Xbox too…