Tag your topic with platform (PC/XB/PS4)!

The healing from dancers stacks to insane amounts and becomes semi-permanent, persisting until death or reloggin. This seems to occur when moving in and out of their range repeatedly. I have several dancers spread out across my base, every time I run around in there crafting, sorting my inventory, whatever, I end up with 5+ healing per second that persists even after moving away from the dancers.

I keep a dancer traveling companion, who also adds to this healing bonus. After extensive traveling with her I notice that I sometimes have 25+ healing per second, rendering all healing items unnecessary. If I get wounded in a fight, I block for a few seconds and return to max HP.

Edit::
I do not use the Receptive trait. I imagine the healing will stack much more quickly with it.

I was noticing this myself just yesterday. I went out and killed a rhino that was definitely out of range of the dancer I had at my base and any damage was almost immediately healed. I don’t have the passive regen trait either. Further, I couldn’t see the buff on my character, there was no regen buff in the top left, and nothing on the stats page. Seemed to be invisible.

On my private live.

Yeah it doesn’t show the Entertained buff when it bugs out like this. You can see the regen effect on the stats screen though, on the right side. Once it bugs out it’ll keep stacking higher and higher as long as you keep using dancers.

I must have bugged it out further somehow then, I don’t have the regen in my stats page even when standing next to my dancer

It’s the permanent stat under Defense that I’m referring to, not the buff. Here is a screenshot of the bug.
On the right side you can see that I’m regenerating over 70 HP per second. A minute later and it’s over 72. 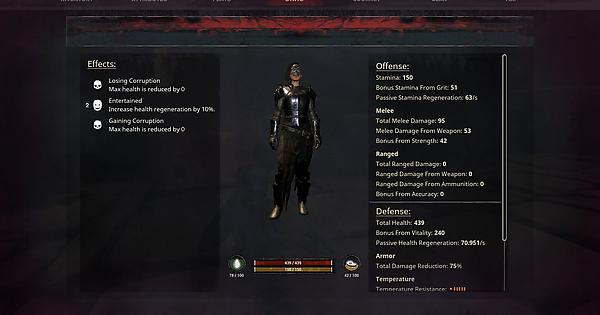 You betcha…but I know it is OP

can we pls fix it? because its broke the game alot, on pve u can easy force the bug and dont care about heal stuff anymore.

Wasn’t Dancer nerfed down a bit anyway for release? I remember that I would still register the buff miles away from base but now it seems if you leave line of site the effect is not there?

The buff does wear off when you move away, but there’s a bug that makes the regen stay until you die or relog. It can also stack insanely high as you can see in my screenshots.

If they tried to nerf it, they failed hard.

I have done that but now the Unnamed City is not ALL corruption only parts of it, corridors and such.

I was wondering what was causing this. This makes sense. I’ve always wound up with this passive effect when I’ve had a dancer in my fort. At one point I was near invulnerable and had to jump off a cliff to kill my self because my friend, a king elk, and 3 wolves could not kill me while I was completely naked.

This is especially game breaking for PvP. I would suggest removing the Regen from dancers completely. All they need is corruption removal.

I’d be fine with that resolution. When dancers are working correctly they only give +0.25 healing per second anyway (10 stacks of Entertained says +50% passive regen but that’s a lie, it gives a flat value). +1 healing per second from Fierce Vitality is enough, and already kind of OP in some situations.

I’d be perfectly fine with only the corruption removal.

Hear hear, corruption removal only would be great.

I just came to that conclusion earlier today. Never really paid a whole lot of attention, but then just as you say, I noticed that the entertainer rate is definitely not 50%. Of course, were it truly 50%, you’d get nothing without the Vitality perk because 50% of 0 is… Heh.

Anyway, I honestly would not mind it if the results of the healing bug were only outside of combat, but then, I am only playing locally until things cool down from Launch a bit, so it doesn’t impact as much. When it begins getting fairly high healing rate, I usually just restart the game since performance begins to degrade for me after two or three hours as well.

Though when I was on TestLive up until a day or two before Launch, I could run the game for days with little to no performance degradation and (I may have mentioned this already) once the passive regen got up to 892/sec. Pretty crazy.

My biggest issue is a combination of being a bit lazy with bandages (dislike dedicating a quickslot), not wanting to carry heavy potions and I prefer playing as a quick, light fighter with not very high HP, usually no higher than twenty points in Vitality, thus no passive regen. The devs have made my light fighter chubby with having to snack all the time!

It’s a shame that this is bugged because it is literally game breaking. You can solo entire camps and villages with this bug, as long as you run out of combat for 10 seconds or so for it to kick in. Doesn’t matter if your friends attack you, enemy players attack you, NPCs attack you, or you fall from a height.

It doesn’t kick in right away. I was having normal regen for about 20 minutes worth of going back and forth from my base, getting in range of the dancer, and then suddenly I was stuck with it.

I like the mechanic - I think it’s cool that if you want decent regen, go eat a steak while watching a dancer. However with it bugged right now the entire game is incredibly easy. All you need to do is take a 10 second break between getting hit and you’ll regen up to maximum.

It was fixed two patches ago. Then apparently the next patch, a few days later, broke it again.
So now I see people say they’re getting the healing but it doesn’t show up in the stats the way it did before.

So it seems like all they did was hide the stat and make the regen pause when you take damage instead of actually fixing the bug.

This is what I gather from reading the forums. I personally have not experienced the bug since they claimed it was fixed.