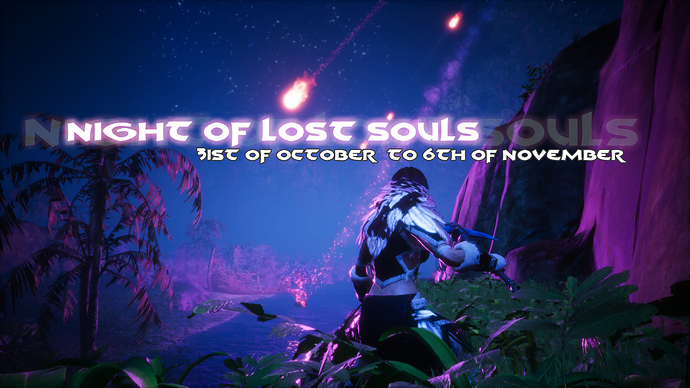 Today we are kicking off our Halloween event, which will run throughout the game during the next week. Welcome, exiles, to the Night of Lost Souls!

The sky will darken as perpetual dusk falls upon the landscape, casting it in black shadows and blue light, tearing at the boundaries which separate the world of the living from the realms of the dead. The clouds will part. A new face will appear upon the moon’s surface. It is the face of death, keeping watch over whatever might stir on the ground below.

During the Night of Lost Souls, stones will fall from the sky in multitudes, striking the earth in a flurry of colored smoke and debris. Adventurous exiles can break open these stones with whatever tool they have available. Inside, they will find a plethora of crafting ingredients, both rare and common, doled out at random by the spirits lingering inside the stones, anything from Plant Fiber and Meat to Explosive Glands, Arrows and Steelfire. It all depends on the spirit’s goodwill.

Inside the fallen stones you will also discover the Potion of Lost Souls, a special brew only available on this hallowed night. Imbibing the Potion will grant you certain benefits at random. Drink one and see what happens, but don’t drink too many or your body will suffer the consequences. Don’t say we didn’t warn you.

After a week, the Night of Lost Souls will pass and the sun will once again rise on the Exiled Lands. The restless spirits will be calm, yet their gifts will remain with those who received them.

The devkit will be made available shortly after this patch goes live, no later than an hour after patch time.

You can use the following console commands to control meteor spawns and decay where X is the multiplier for time.

THX Erik, any idea around what time it will start?

“i swear if the performance isnt fixed im done with CE ive waited since pet update for it to be fixed.”

Performance issues have been fixed (for me at least) im finally glad to be able to play the game again.

NVM just got my answer

Any word on when the PS4 might get this patch? It’s the only platform still waiting for it.

(which is in around 40 mins from when I posted this).

Thanks, at least this a really close gap between patches, unlike some of the earlier ones, thanks to Sony’s certification process.

Ooh nice, looking forward to it! Also good call on letting it run for a week, I’d have completely missed it otherwise!

Im sorry i logged in and its bleuish (too)dark all the time, cant move as im building high.

some1 adviced me seriously to put out lamps everywhere … wth lol

Is it possible to deactivate this event on private run servers via console command? Not really fitting for our roleplay server …

let me please switch this off im don’t want to be forced into this, i was enjoying my broken game, leave me alone.

If i would say what i want i would be triple banned.

Unfortunately not. This will affect all servers and modes.

Looks awesome. Wish it was running for more than a week. Love the lighting.

thank you for the quick answer

What are the server settings for increasing meteors as per the stream? Thanks

this is absolutely terrible, You have an MMORPG “Age of Conan unchained” please sweep this kinda stuff back over there,
Priorities:
1: bug fixes
2: features that were advertised
3: griefing solutions
4: increase content

That is part of the event, but we didn’t intend for it to be too dark. Try increasing your Gamma settings in the game. That should make things brighter

When is the pc patch going live?

This is some bug or there is night forever ? Cuz i think this is stupid. 20 Torchs in my base is not making any light, if u are not playing with gamma 2.5 or 3.0 u cant see anything

When is the pc patch going live?

this is absolutely terrible, You have an MMORPG “Age of Conan unchained” please sweep this kinda stuff back over there,

Thank you for the feedback

While Conan Exiles isn’t an MMO we did want to do a themed event for Halloween. While we understand that this type of content isn’t necessarily for everyone we hope you’re still able to get some enjoyment out of it.

What are the server settings for increasing meteors as per the stream? Thanks

You can use the console command “SetServerSetting HalloweenMeteorSpawnTimer=X” where X is the multiplier for time. The higher number, the rarer meteors are. Set this to a low number for more or less constant meteors.

You can also use “SetServerSetting HalloweenMeteorDecayTimer=X” to control how quickly they will decay.