Thralls Are Still WAY OP - Even For The Hardest Purges!

OK, so I got specific purge initialization to work now thanks to some official FC dev instruction!
I set up a purge base in about the same way I usually do:

In this particular case I gave all the fighters only kitted truncheons and just blunted arrows for the archers. Mainly to prove a point. I usually don’t take thralls from a purge and I man my bases with 90% Level III thralls - because even they are already overpowered! But when I mentioned the overpoweredness of thralls in the Thrall nerf to far? thread I was essentially called a liar and challenged to a demonstration. LOL

No need for all that but here you can see how just thralls alone can mop the floor with even the toughest purges. I didn’t kill any NPCs myself - well, one lost guy hiding behind a tree and I walloped a few bears because they take kind of a long time to kill with blunted arrows.

Near the end of the second wave I decided to fly instead of walk so that people interested in seeing the action might be provided some better or more interesting camera shots - especially I figured the point was already self-evident by that time.

There are about 25 truncheon wielding “Fighters” on the ground and roughly 40 blunted arrow shooting archers slightly elevated. All 100% of these thralls can be captured in a single day from the northern “Leyshrine Of The Serpent” by spending only 40 or 80 Hardened Steel bars and having 8 thrall wheels set up nearby. The highest HP thrall is just a hair over 8k, the lowest is a little less than 3k. The lion’s share of fighters are right around 6k and the main portion of archers are right around 4k (all after leveling them to 20).

All the materials for the armor and weapons can be farmed and the armor manufactured by any level 60 player in about the same or less time than it takes for the thralls to be broken on the wheel - (less than or about 24 hours). So, if you were a completely insane person like me you could do all this (and have better armor at the end of it) in just a single 24 to 36 hour period. Maybe add another day to build the base and daydream a bunch, but there ya go…

Of course leveling them all to level 20 will be a major time investment but level 20 isn’t really needed. I find (previous to TL 3.0) that mid-race Level III thralls leveled to 10 are perfectly adequate for base defense - not to mention almost always plenty powerful to solo any boss in the game! Also not to mention that not so many thralls are needed if your base is smaller. In this purge there are typically never more than 8 or 10 fighters fighting at any one time and likely not more than 12 or 15 archers shooting.

Anyway, probably enough talking… enjoy the video (be sure to set it to 1080p/60 so you can actually see what’s going on. 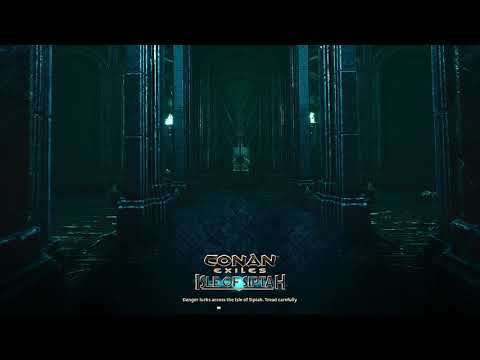 I wonder if someone will now “publicly” admit to being ummm, far less than “great” at this game? ROFLMAO! Nah, I expecting way too much!

NO THRALLS WERE KILLED (OR REALLY EVEN HARMED) IN THE MAKING OF THIS VIDEO!

NO THRALLS WERE KILLED (OR REALLY EVEN HARMED) IN THE MAKING OF THIS VIDEO!

Very good! Thank you for taking the time to actually prove that thralls are not “nerfed into the ground”.

Just yesterday I had a discussion with my girlfriend about thralls and she agreed that they are still too strong.

Imagine @TeleTesselator had actually buffed each thrall with an elixier and food buff. This would be 30% extra damage.

I see a lot of loud people here on the forums who think they know how the game works, but they actually do not, because they never peaked out in gameplay. Sadly Funcom listened to them in the past, because they were the loudest. And these same people actually told other players to “get good” when there were discussions about actual unfair gameplay bugs and imbalances but are now literally crying because their thralls got “nerfed into the ground”, which are not, as this thread and video demonstrates.

Thralls are still quite strong. Makes for a boring gameplay. Purge is not a real threat, unless you’re under lvl 60 and poorly geared.

OK, so I got specific purge initialization to work

I’m jealous on you now…

Curious that you used RHTS bosses as thralls. The ones that normally cannot be tamed. Not that I don’t believe the overall outcome since I recently did my own test, but in addition to showing all thrall armor equipped with bulk plating, is there something a bit more representative of a middling setup instead? It would greatly help the case.

Well hmmm… I didn’t think those were bosses - I’m not that experienced using the admin spawn-in stuff. They have the same names as the dudes who spawned in the Leyshrine Of The Serpent surge I kicked off before setting these up. I could knock them out… I hit a few and their consciousness bar decreased anyway. They didn’t have skulls on them…

I guess I could spawn a bunch of Level III guys… any recommendations?

The bulk padding is pretty typical for me to put on thralls. So is the wolf helm and serpent gloves. I usually level my Level III thralls to 10 by running them through a vault. That pretty much always gets them to Level 8 and then the killing on the way there and back get the other two levels. At the same time it pays the Eldarium needed for the next 5 thralls’ armor.

But sure… guide me… I’ll set it up differently… It’s all just a bunch of fun.

Nah, no need… Here, check this:

I was answered in DM which is smart all things considered… Here’s the important text from that message: Looking at this and testing it internally, looks like the “skipPrepareTime” part is actually required. Try StartPlayerPurge VanirArmy_Wave1 True and also make sure to reduce all the setup time in server settings to their minimum. It seems I was just leaving out the “true” at the end there. At least I can’t find a switch called “skipPrepareTime” and the console rejects it as unrecognized…

I’m not from either side thrall nerfs are bad or not, but as a solo player I find that affect me badly. You said you have 65 Thralls total. All of them have upgraded gears (which is easier on Siptah and harder on EL) and Level 20. My purge bar almost reaching 75 and I still have around 10 to 15 or so normalish thralls without fully gear and level. And you expect people defend hardest purge with them alone. You are missing THAT point. Yes nerf was needed but this nerf is really bad for solo players.
Still your arguments not fully valid. Yes they could OP with LEVEL 20 and FULLY GEARED and FULL NUMBERS OF 65 against hardest purge. But they are not good enough for a standart players. Because a standart player (even solo player) can’t reach that point before hit by purge.

I think the key to remember here is thralls may still be “strong” but they got a huge health nerf so in pvp you won’t see as many people running around with thralls because they can be killed very quick. Pve the same can be said if you don’t keep a good eye on them. I’m fine with the nerf but lets give it a try before saying they are to strong.

throw a rocknose avalanche purge on them.

Mmmm, I think it matters how you play the game - there’s so many ways to play it. If you’re intent on a purge-proof base and that’s your goal then it comes fairly easily. You’re right that thrall processing goes a lot faster on Siptah but I’m amazed how fast people can get full thrall limit on Exiled Lands of all named thralls too. The main difference seems to be that they set up a wheel or two at 4 or 5 different locations and then use the Maproom and PVP Banner to jet around. It works out close to the same but with a little more work.

If these are your goals and you get a purge or two before you’re fully set up just shoot a bunch of poison arrows at every conflict clump - you won’t lose any thralls, there will be almost no base damage, and when it’s over you can continue on.

If on the other hand your playstyle is to adventure and explore with just one or two thralls and a mount then you have to build your base with that in mind - and a defense like I’m showing won’t be possible. Still however, you can defeat the most difficult purge with no thralls at all - none! You just need to consider different tactics. I would probably level a mount and manufacture a buttload or poison arrows. Build only a small base and pocket or vault all the expensive stuff just before the purge starts. Then run around leading the hordes away from your base and vault while sending poison their way. They’ll die and you won’t even get hit except by an arrow or two if you’re careful - and your base will get like, no damage.

It all just depends… But yes, I set up the test sim to look like something a vet level 60 solo player playing weekends for a few months, would likely have. It wasn’t meant to show n00by level play. I can show that if you like though. Just let me know. I make a great n00b - for obvious reasons.

Okay… I’ll likely post another vid with Nord III fighters and archers tomorrow or so.

they will be bullied, flagged and worse.

Now you see how it feels to bring up the tos. To stay on topic tho… I’d say just let it happen and if anything is to op when 3.0 drops you can expect a patch within 6 months to a year

Tele while I appreciate the demonstration, I actually don’t see why you can’t he helping the thralls for a demonstration. I don’t think anyone who criticized it would have any credibility arguing by means of “yeah, but you only succeeded because you helped! I shouldn’t have to do a thing!”

i don’t think it’s a matter that the thralls are still strong, but much more, than the zombies (3 of them!) are too powerful and also very easy to get!

Just talking about a purge. Anyone who doesnt high tail it home when they get the purge notification doesnt understand why they get the alert in the first place.

All in all this test is flawed for comparing thralls pre update 3.0 and post because the majority of the thralls you show were still operating on the damage modifier of the top tier thralls prior to the update.

I know that testing can be brutal sometimes and I know you put a lot of work into this, hopefully you will give it another go with thralls that can be knocked out. If you found one of the above mentioned NPC to be able to be knocked out then you have found a different bug, much like the Beast Master Teimos bug.