Chests and other placeables lose stability after picking up foundations

Picking up building pieces causes other items to lose stability that are not even close or related to the item picked up. Everything had 100% stability even after picking up the foundation.

This issue has been reported before, I think the new pickup code is making the bug worse:

Game mode: Online official Type of issue: Bug Server type: PvE Region: EU 1052 I logged on after the update today to do a small task (so the base would have loaded, but I was not inside where this happened). According to the log, the chests lost stability for no reasons (they have been there a long time) and was row 1 and row 2 on shelf above other chests (have quite a few like that). Aquilonian wall but likely unrelated. Luckily we did not lose anything critical, though still this is reall…

Game mode: Online official Type of issue: Bug Server type: PvE Region: America Official server #1510 PvE - g-portal.us Today I noticed 3 chests lost stability in my oldest base. I wasn’t updating or making modifications to the base at that time. I wasn’t doing anything at the time, not even sure if I was logged in when it happened. This is where the 3 chests were, they have been there for many months. TeleportPlayer -51666.65625 201710.328125 -18141.921875 Here is the relevant event log: …

Game mode: Online official Type of issue: Bug Server type: PvE-Conflict Region: Europe Hardware: PS4 PRO Bug Description: After the 2.7 Update I logged in and in a while I noticed that a lot of decorative objects were gone (seats, pillows, tiny objects on the shelves/tables ecc) and olso some chests - placed on top of the cupboards. Steps to Reproduce: Updating to 2.7 patch Log in Objects/chests lost stability and wiped

Event Logs when it happened: 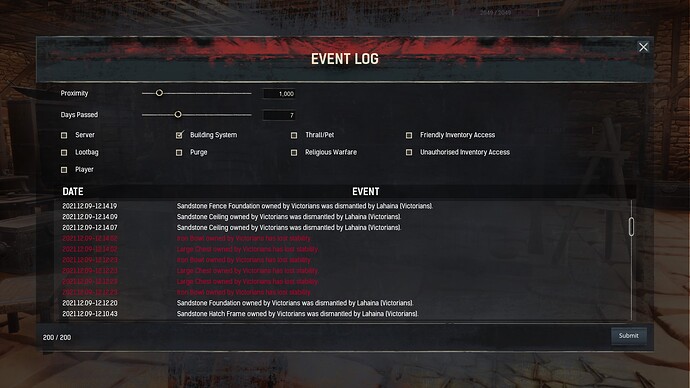 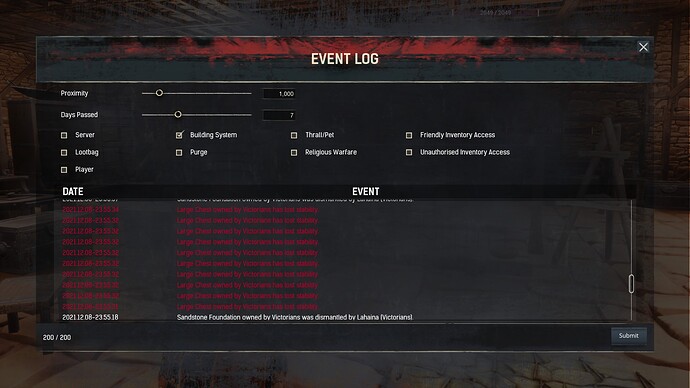 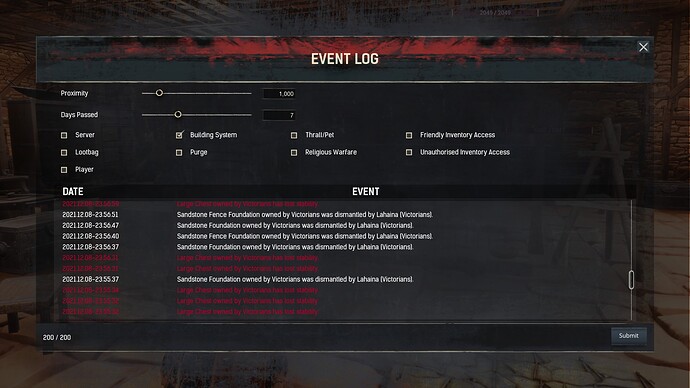 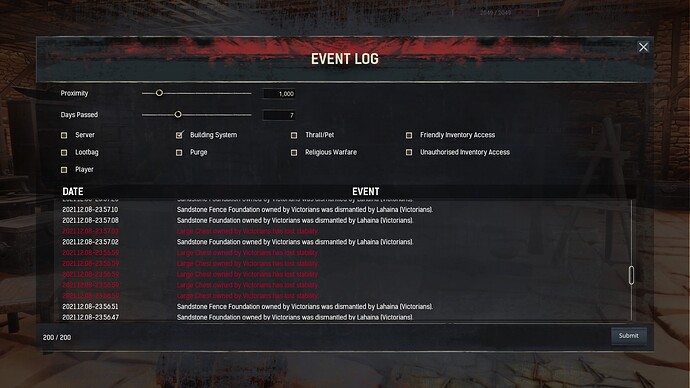 Note this weird one with bowls just losing stability every few minutes on their own. Bowls were on flat surfaces with 100% stability. The foundations picked up were 4 - 10 foundations away from the main building where the chests and bowls were. 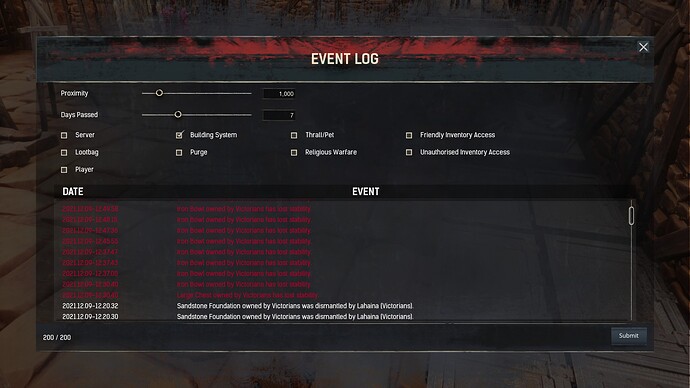 My server is also getting this problem.

Bumping. This issue is still happening. Any resolution for this?

It seems that there is something wrong with the decay timers.
i have several boxes full of Lewt “dissapear” in our base. the logs say that the boxes “decayed” wich does not add up because they are in/on the same base (wich has not decayed). My screenshots show that there are different decay timers aswel. wich should be impossible due to how it is all built. 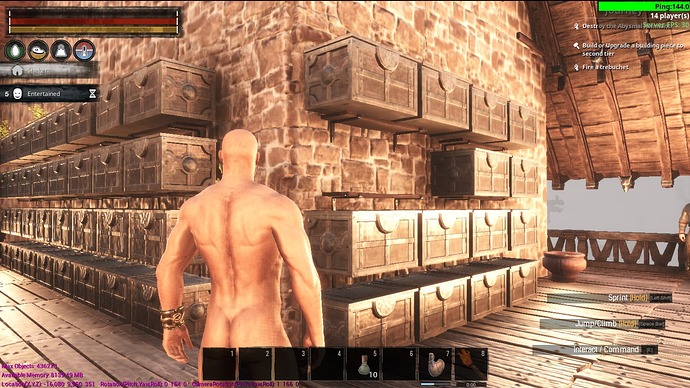 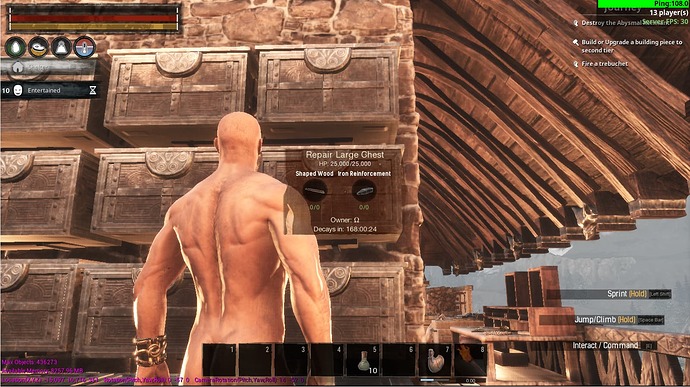 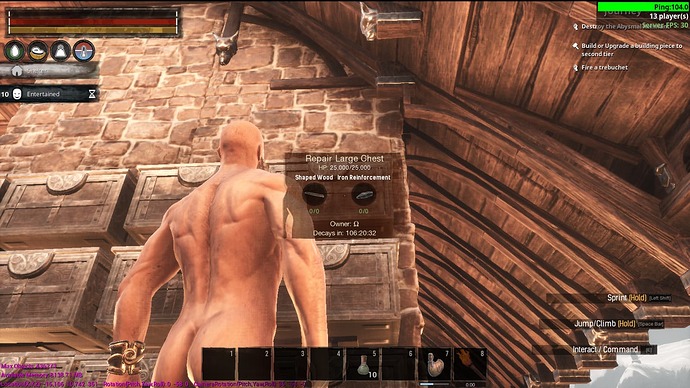 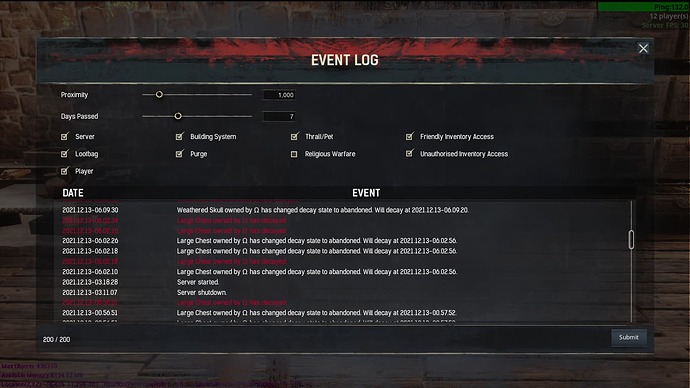 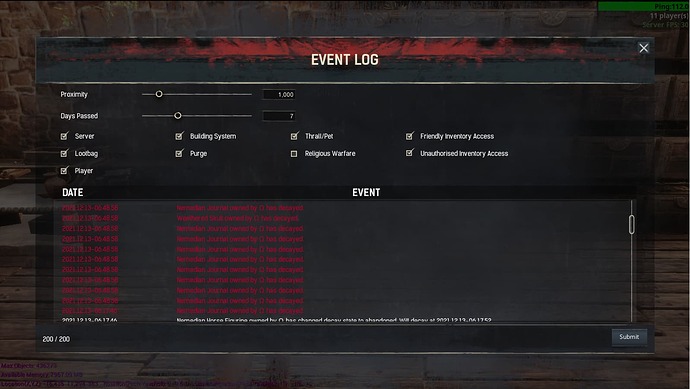 i hope this can be resolved quickly? as i (and my clanmates) would like to keep our stuff as much as possible^^

Have same issue and reported it too here

this mod was installed before, in 2.3, 2.4, 2.5 and so on and i had never such issue. I also tested without mods = same result. It happens randomly but mostly with chests. Expecially when chest putted on other object.

only chests that placed on something else disappearing. It happens only after 2.7 update.

its when u dismantle stuff at ur base, check the chest

Hey, thank you for reaching out about this issue. We’ve sent the information to our team. Please don’t hesitate to reach out again if you encounter any other issues.

Loss of stability coincidently just after the server restart: 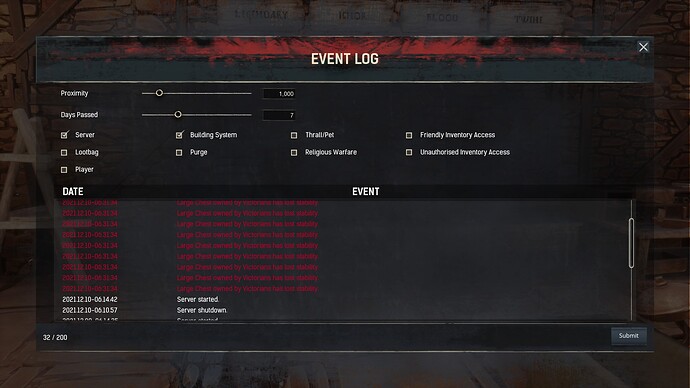 Couldn’t fit them all on one screen: 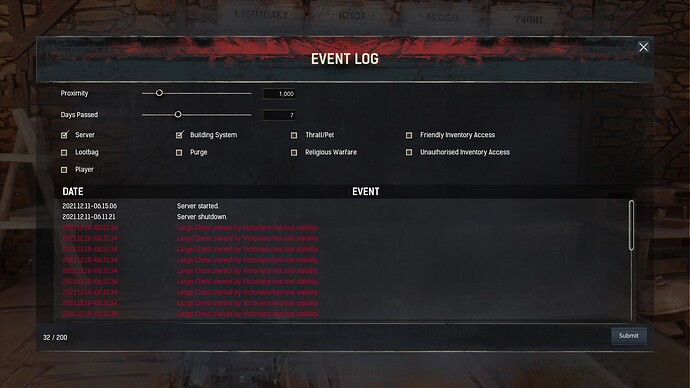 This one is just random decay close to midnight: 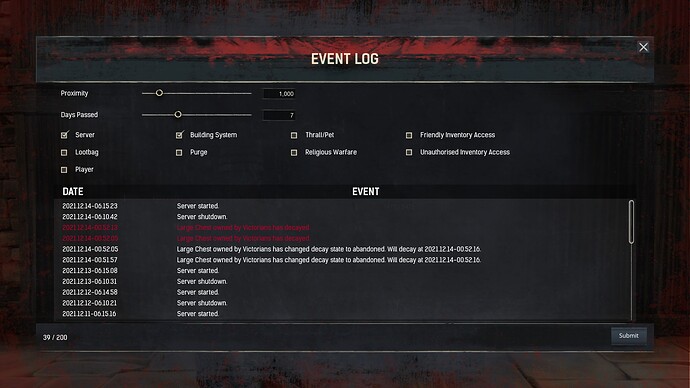 And chess boards!!
Seems the server didn’t like 1 side and lost stability!

This one is just random decay close to midnight:

There’s more of that happening:

Thanks again, great job, I love it when stuff dissapear General Discussion

Not sure if the stability losses and the random decay are related, but I wanted to link it here for the devs to see.

I am not sure if they are directly related as well. In all cases, there are coincidental events; however, it isn’t apparent that they are causal. I have even seen it happening in single-player by placing chests and then picking up foundations nearby. However, the timing is never immediate, but about 1 - 3 minutes after the foundation has been picked up. The stability of chests has been a problem for a long time; one of the previous reports is mine.

The stability of chests has been a problem for a long time; one of the previous reports is mine.

My god… and how frustrating this bug is…

Same here @ official pve servers #1020 and #6010, random crates at the shelf do not refresh counters anymore and showing 0 decay time after awhile. It does not happen with crates which are placed directly to the ground. If we need to place all of our crates at the floor now, we have to expand our base and build halls to store the chests. There is also other stuff missing, most of them are decorations. 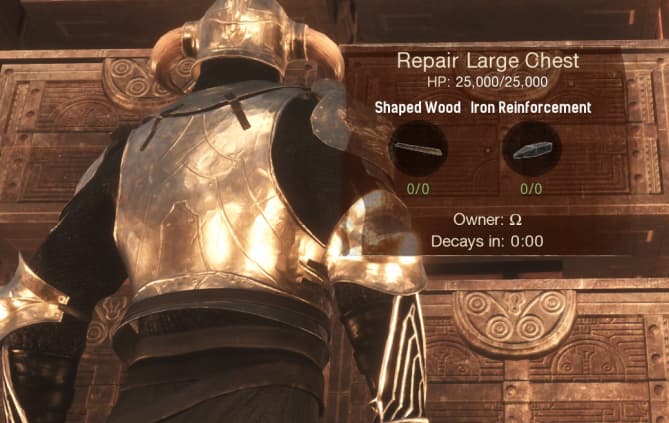 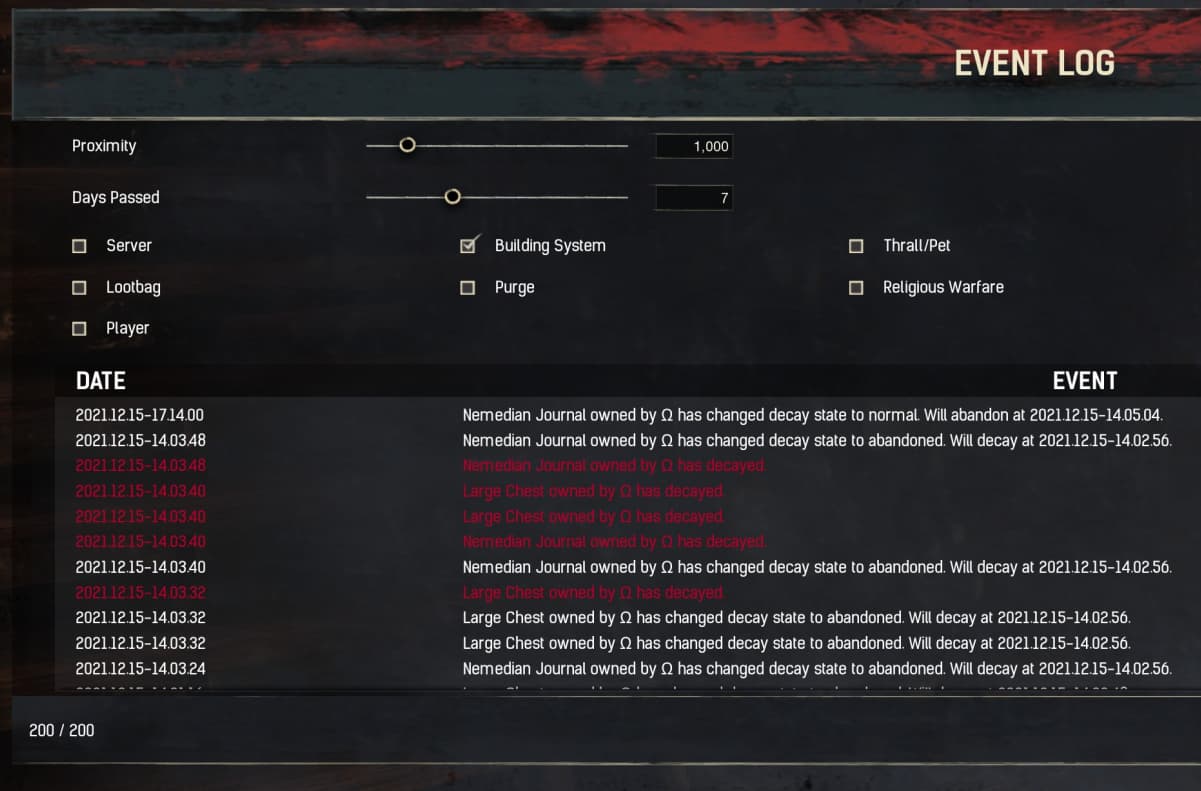 It makes no fun to play anymore if one cant be sure that the stuff is still there after a while. You have to check every single crate if you want to be sure not to lose anything. Any help would be much appreciated, thank you! Regards Biggs

Can confirm the same bug on official online PVE servers #6011 (Siptah) and #1011 (EL): different timers for placeables (the same time base foundations have full timer 168:00) and unexpected decay here: 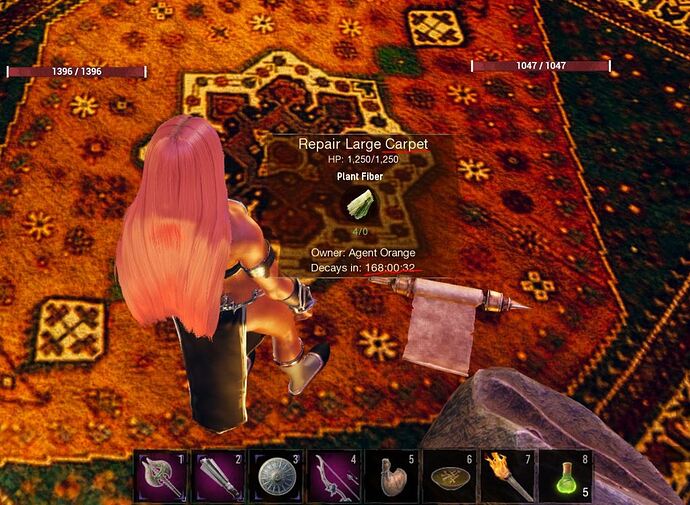 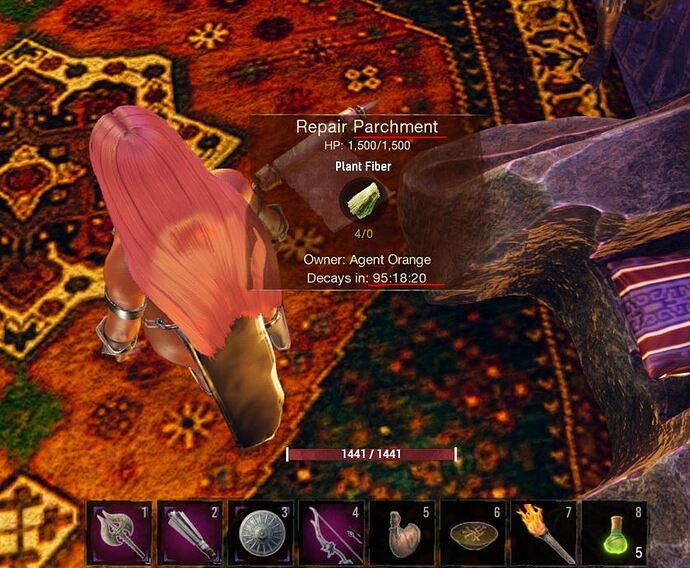 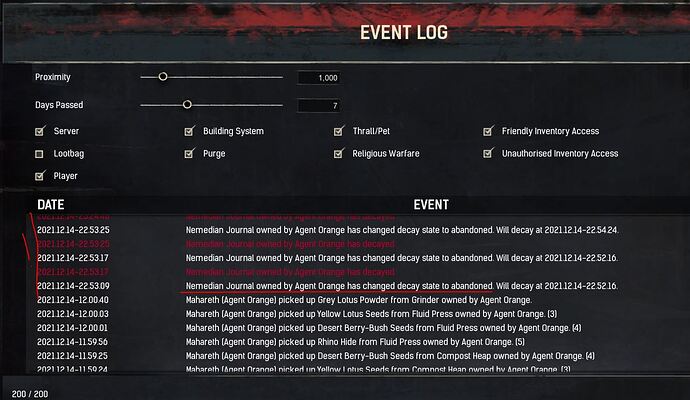 A possible reason for this is the order in which servers are now loading objects. I’ve always wondered what keeps structures from collapsing when I log in and I see everything loading in and walls are just spotty. I had an issue a while back where “apparently” one of my roof tops with that 20-40% stability broke according to the person who infiltrated our base.

Perhaps during first initial loading, all structures and furniture should acquire 100% stability in an area for the first 1-3 minutes and then calculate stability after everything is completely loaded in.

In another building, from the event lot the timings don’t even coincide with server restarts: 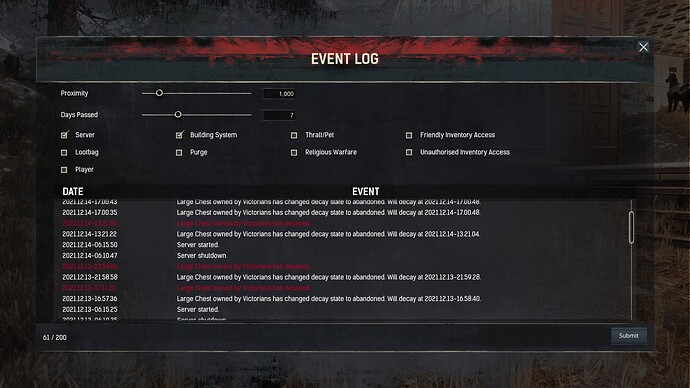 I"m also seeing strangely low decay timers inside a large building that should have 168 hours: 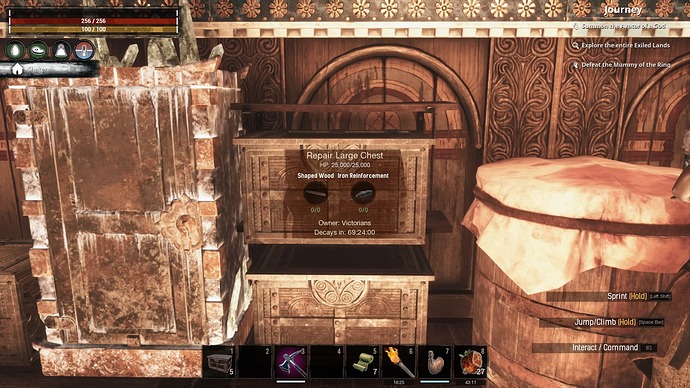 Chest decay timers are not resetting. I have observed that when I am at the building, most of the building is reset immediately. However, the chests that are decaying do not reset their decay timers and are still counting down from the last time they were reset.

So for example, one of my buildings was reset 102 hours ago. So the building and everything in it would be at 66 hours to decay. When I went to the building, I watched the decay timer reset on the foundations, and everything reset as you would expect, except a bunch of the chests and one Khitan Folding Screen. I held TAB and watched the chests that were not reset, and they continued to count down while I stood in front of them, even though the building and the other chests would reset every minute just as they should.

I watched for several minutes and the building continued to reset its decay timer and so did all the chests placed nearby, however the chests that didn’t reset, continued to stubbornly count down.

A chest that isn’t resetting: 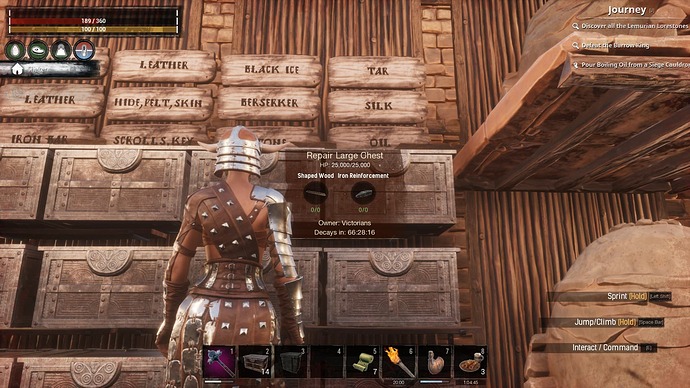 A chest that is resetting: 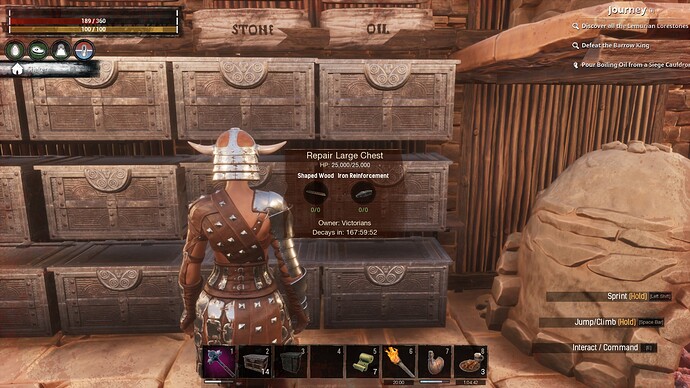 As I stand here, every minute the top chest doesn’t reset. The other chest is resetting every minute.

Adding logs of other items that are decaying even though the rest of the building is reset. 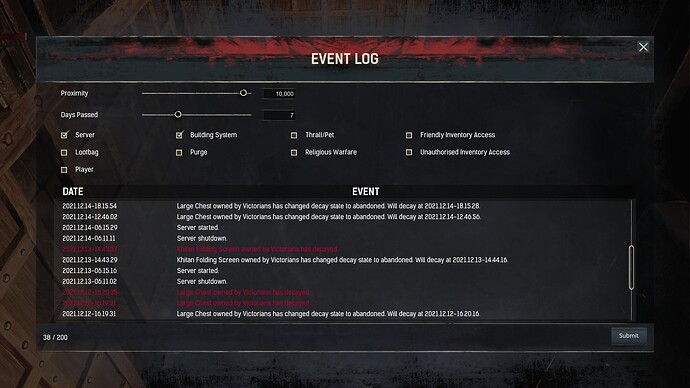 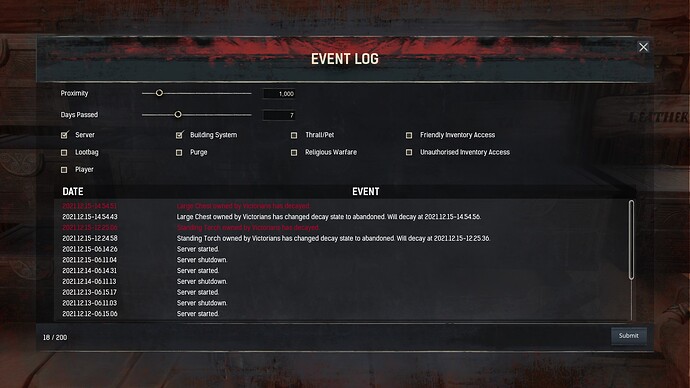 At another building, I have 5 distinct decay timers on chests:

It seems to depend on what got reset the last time I visited the building.

Not only chests - various placeables / decorations are affected - i watched more than 4 minutes as haystack timer did not reset this morning from 151 h (it had full timer yesterday); each pillow on carpet (carpet had full timer) had different timer (151 h and 95 h) and timer did reset only after i picked them up and placed again. The same time pillows on carpet near had full timer - 168:00.