“We are holding our breath for an update from Funcom that will address the server browser issues.”

That is, what most people owning servers are waiting for - mods causing problems we know for a while now. Nothing to do with the mods. Thats why i asked if we should plan with the hotfix being on testlive for a while or just for a quick check if everything works fine

I only have one mod downloaded, the offline mode mod by hades. I tried to test it for a previous testlive patch and manually placed the .pak file in “…Steam/steamapps/common/Conan Exiles - testlive client/Conan Sandbox/Mods” folder.

If I copy the modlist.txt from mods folder on live to testlive mods folder, the game load the mods in singleplayer but they don’t show when I click Mods in main menu.

Strange. I’m no expert with mods. Maybe someone else can speculate.

Follow distance seems much better, fall damage is back!
No issues in unnamed at the moment.

Can’t test purge as i can’t move the meter far enough or fast enough on test.

Quite true, @Shadoza, for ingame play, testlive will probably not be compatible with existing mods. However, the following patch note needs some attention. Ideas?

Added a few changes in regards of how mods are downloaded when required to join a server.

Quite true, @Shadoza, for ingame play, testlive will probably not be compatible with existing mods. However, the following patch note needs some attention. Ideas?

Added a few changes in regards of how mods are downloaded when required to join a server.

If that is the reason mods don’t work on testlive now, it has to be fixed before going live.

If @stinger is trying to test basic function regarding mod loading, then he already is testing it. I think most people posting in this forum know updates might cause mods not to work. But IMO the client should at least be able to show what mods are available. The one I placed into my mods folder displays for me, and assuming stinger’s mods downloaded correctly, they should at least display for him, even if they will later require update to be compatible with the game revision.

Mods when loaded with a modlist.txt work for me. However, they don’t appear in the mod menu in-game.

So happy to see the path finding well ai improvements. That was one of my biggest internal complaints when playing! nice job!

US3 PVE
Player List isn’t showing up for me.

@Narelle mentioned in another thread that History is not showing on the server browser. This is true for me also. Testlive client if that makes any difference.

Several things are happening. First, the Favorite mark is showing up after relog, a good thing.

Unfortunately, the client is not polling the stored IP first, but ignoring the favorited one and polling all the available servers. Unlike before, your fave does not pop in immediately but is somewhere on the list with the icon.

The easiest way to find it, although the available server list is short enough for one page, is to sort by character level and your previous servers pop to the top. The other way is to tope in the first few letters in the name filter box.

I hope they fix the polling thing before live since all servers will be polled and yours could be anywhere on the list, first or last and anywhere in between. We could have a wait until ours are listed and we can find them.

your fave does not pop in immediately but is somewhere on the list with the icon.

This is true. Sometimes before the list is fully populated I see the favorited server flash at the top but then quickly be shuffled to somewhere else in the list. It only lasts a frame or two, and it seems random.

The other way is to tope in the first few letters in the name filter box.

When all the live servers were also displaying on testlive that’s what I did. Sorting by level is a good workaround that I hadn’t thought of. Sometimes I fixate and don’t consider other alternatives. When I use the phrase “correct me if i’m wrong” I’m not being polite. I know that I overlook and forget things and sincerely hope someone will correct me when I’m wrong. My ego here is irrelevant. This is about improving the game.

although the available server list is short enough for one page

True for us in testlive, but if it hits the live version still displaying the behaviors that one page will become many.

TL;DR - Some purge NPC pathing issues discovered, but no unwarranted teleporting discovered. Unless someone requests a specific location, I’m all purged out.

The building in each purge is a 3-story round tower design constructed as identical as terrain would allow with a Building Score of ~14k. Coordinates are recorded when standing on the center of the building foundation. 5 archers placed on isolated elevated ceiling tiles around the perimeter. 5 fighters total placed on the ground next to each of the 3 closed doors of the building. For the first wave of each purge, player was cloaked and did not interfere. For subsequent waves, player was uncloaked and primarily fired arrows from the rooftop with infrequent treks to ground level for melee combat.

Location 4. TeleportPlayer 194982.296875 30235.730469 -20006.003906 (swamp near Ruined Outpost)
Crew of Black Hand Pirates
No anomolies observed
Cultists
First wave required player interference. Ground fighter thrall AI was erratic. They would walk slowly back to their guard location while taking fire, possibly leashing mechanic. Some changed their own guard location, possibly a pathing issue. Some had weapon equipped but did not attack nearby targets. These same fighters would attack if an enemy was adjacent. Second wave had the same issues but far fewer instances due to player actions. Player aggro transferred to thralls much more effectively than thrall aggro transferred to other thralls. No anomolies in enemy behavior, though I suspect part of the problem with this purge was the distance between thralls and enemies. The sobek archers have a really good range. Adjusting thrall behavior may have fixed it, but I thought leaving them on the default behavior was more important for controlling variables.
Plague of Locusts
Some pathing issues due to the size and bulk of the locust corpses caused ground thralls to choose new guard locations. By the time I had spawned in a pick and harvested the mess, the purge was finished.

Location 5. TeleportPlayer 20291.34375 207402.359375 -16603.171875 (near Sinner’s Refuge)
Followers of Asura
NPC’s did not path/teleport correctly (Screencap below). Structure was built on a plateau with steep walls on both sides. Two or three NPC’s managed to fall down the cliff face, but most remained on the upper plateau. I removed the closest building piece (circled in blue) but that didn’t solve the pathing issue. I think this is one instance that the purge NPC’s should have teleported but didn’t.
Horde of Darfari Cannibals
I added a detached staircase nearby and they were able to path, but preferred attacking the staircase rather than the main structure. NPC pathing was very ugly, but possible. 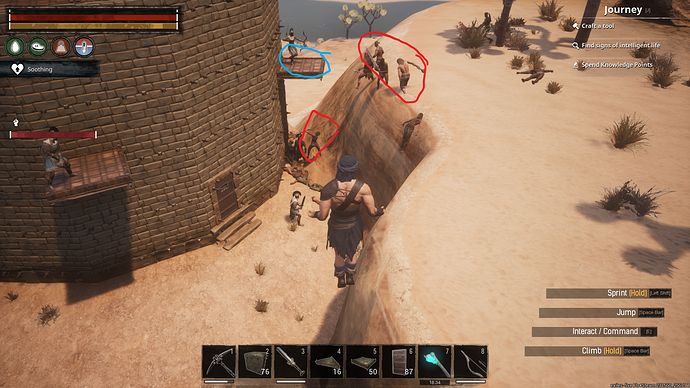 Last connected server should show up at the top of the server browser list again.

I’m a little late in responding to this, but this hasn’t been the case for me on the Testlive Client. Screencap to illustrate. As I stated elsewhere in the thread, when the server browser is initially populating, my server will flash at the top very briefly but doesn’t remain there. You can also see the artificially high ping value here. The highest ping I have ever seen on the DebugHUD while playing on the server was less than 200 but here in the browser it displays as 1264. 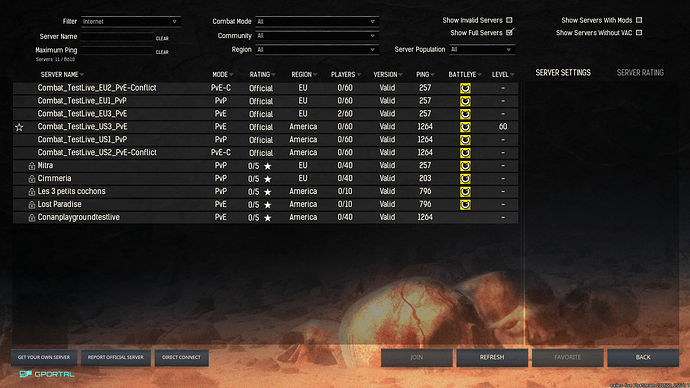 Purge testing. Testlive Client. Singleplayer mode.
This test was an attempt to loosely mimic the location and conditions of a faulty purge reported in the Live PC Bugs subforum.

TL;DR - Many purges were triggered by admin commands, but only one wave of Cimmerian Beast Tamers ever appeared. Testing was abandoned after 1 hour of nothing spawning.

The supporting foundation was built from sandstone foundation pieces underwater and sandstone pillars were placed on each foundation stacked until just below the waterline to transfer 100 stability to the primary structure. Sandstone ceiling pieces were placed on top of pillars, and Reinforced Stone Foundation pieces were placed on top of the sandstone ceiling pieces. The primary structure was located at TeleportPlayer -8574.963867 -78903.953125 1313.735107 (marked by a green dot) and was built identical to all of my previous purge testing structures. A walkway leading to the mainland was constructed of Reinforced Stone Ceiling tiles, supported by intermittent sandstone pillars. A landing on the mainland was constructed from Reinforced Stone Foundations and stairs to ensure good ground contact and assist pathing AI. The first and only wave to appear spawned over the water next to this landing. At one point, the mammoth became stuck inside the structure, and my thralls were unable to target him. I admin-killed him, causing the game to report “Cimmerian Beast Tamers are regrouping”, and that was the last purge notification/activity I observed before logging off and exiting the game. After each subsequent attempt to initiate a new wave or a new purge, the event log showed that the purge had ended 2 minutes and 30 seconds after the event log showed that it had begun. I deleted the walkway and all supporting members in an attempt to force a purge to spawn at the main structure, but no on-screen activity was observed, and the event log still consistently showed that a purge had ended exactly 2:30 after it had began for each attempt. I gave up and exited the game after an hour of nothing happening. The following screencaps are presented in chronological order: 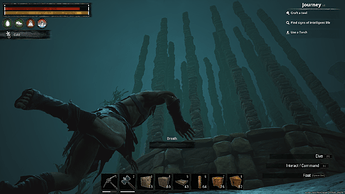 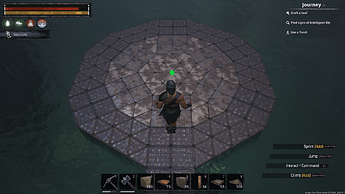 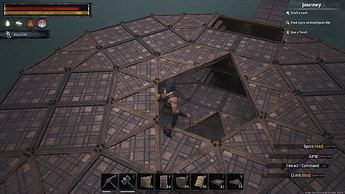 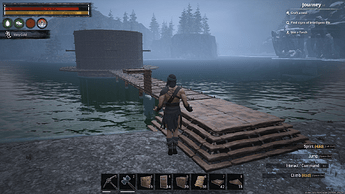 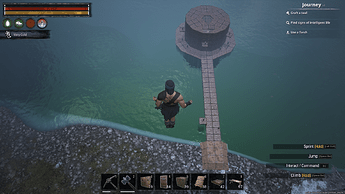 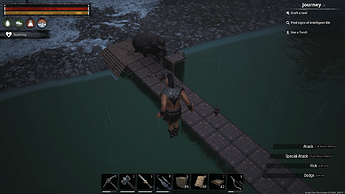 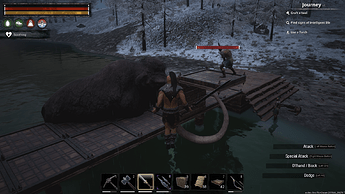 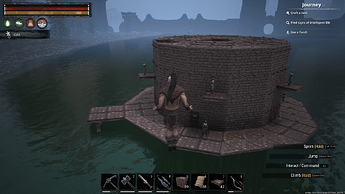 Testlive update, but no patch notes or new thread?