We have a new Testlive patch with extra content for the game. Test your mettle against the Warmaker’s Champion in The Warmaker’s Sanctuary, a new dungeon for a seasoned party of level 60 adventurers. Check our the continuation of our population revamp on faction capitals and caves. Experience an overhaul of the temperature system and changes to your survival and agility attributes, as well as additional weapon balance to make combat more rewarding.
We’ve also added a ton of QoL improvements and bugfixes, including a solution for the God’s Protection problem (God Bubbles), building stacking and flying thralls! 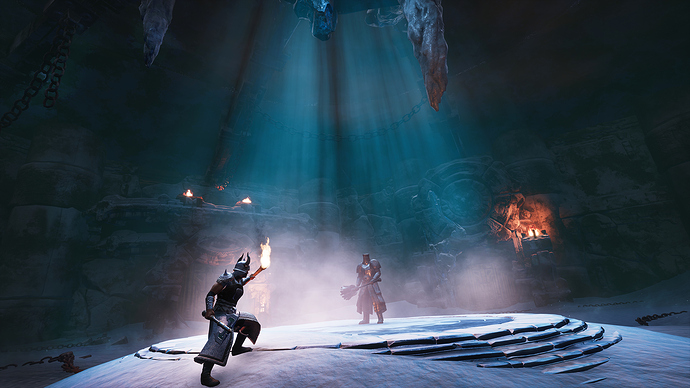 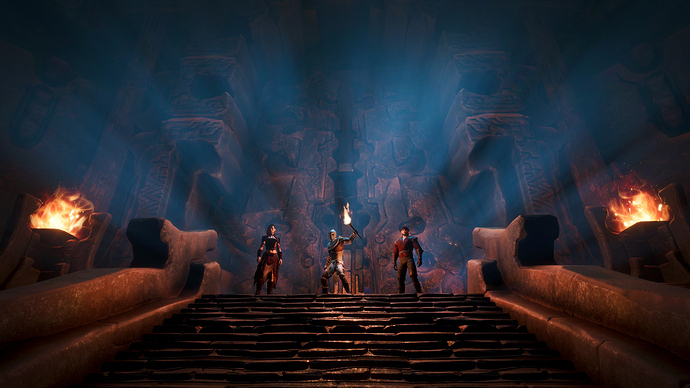 Continuation of the population revamp!
Building upon our previous content patches, the faction capitals and caves in the game have received an overhaul. This revamp includes new bosses, functionalities, recipes to be found, new loot and more!

Temperature system update
We’ve reworked and improved the temperature system of the game to make it more consistent and easy to read, with changes to how its effects are stacked and telegraphed to you.

where is the ini “Warmaker’s Sanctuary” ?

This sounds great and I’m def diggin the love you’re giving daggers this patch after the hyper armor buff last time around, now all I want to be happy is a poison rework/balance - make it timer based per application like the jhebal claws, allow us to put poisons on our toolbar like arrows and select it when on toolbar to apply to currently wielded weapon or allow us to stack multiple applications/charges… Please?

What’s the eta on this update going live on console?
And does the bubble fix mean Gods will be re-enabled?

What’s the eta on this update going live on console?
And does the bubble fix mean Gods will be re-enabled?

No ETA yet. Whenever we’ve gathered enough feedback and feel confident to release the build live (plus certification in the case of consoles).
Yes, once the God’s bubble fix is released, avatar summoning will be re-enabled.

EDIT: Nevermind - didn’t notice that my question was answered with Ignasis’s edit of the original post.

Thanks for the reply.
Keep up the good work!

Hey there! You removed the Captain from Sepermeru, now you are removing Bandit Leader as Thrall… And they say Dalinsia Snowhunter now is way harder to find too. Do you think this is fair for new players coming to the old servers? Everyone has tons of Captains and Dalinsias, many have Bandit Leaders, and newbies have to go to Volcano only for good fighters to make followers? Volcano is a very bad place for hunting Thralls 'cause you can’t take any followers with you (because of your bug in their AI). Return the Captain to Sepermeru or place some other powerful Fighter Thrall there.

the thralls in unnamed city are as good as captain, I think.

Love all this content, this game is awesomeness despite the blips of making an epic game

Really is rediculous to say the least

Hello everyone!
First, I want to thank FC for this amazing work,the new dungeon is marvelous, great job on this one!
Good structure, good boss fight, great textures, traps everywhere, maybe some trolling at the end?

The cities revamps are great, the thrall hiring system is really appreciated.
ps: I think one of the miniboss in buccaneer bay- the second in command I think it was- my lack some hp?
Have a nice day !

Mmhmm. In the immortal style of the Bandit Leader, “Set will grant you cunning!” I’d wager you have about 50 of each?

An end-game duder who hits like a Marine Regiment should probably be farther up the map. Doesn’t make it easier to take, but it makes sense.

They are harder to get than the Captain. He/she used to roam all alone even outside the city and was an easy-cheasy prey in such a situation. You can pull out those little bandits and kill them one by one, so you can fight with their Leader one on one. And Relic Hunters stand in packs of three and there is their strong mini-boss near them that must be killed first (without pulling some of Relic Hunters, or you’ll have to kill them too).

The Combat Testlive US3 is Invalid in the list.

I almost want to buy on PC just for testlive!