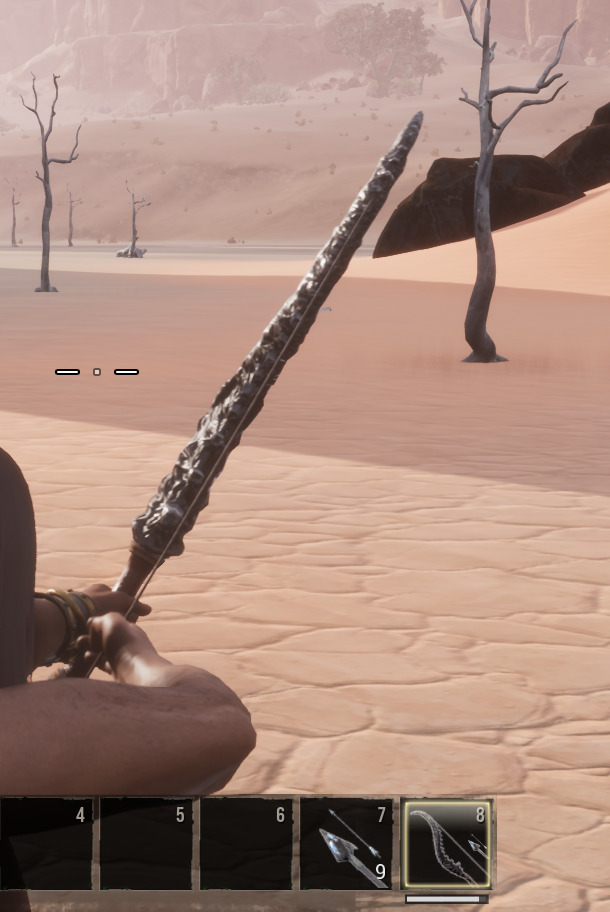 for what we need 2 1h black-ice swords? second one is just worst

Thank you for sharing this with us.

We will be passing this information over to the rest of the team for further investigation.

Thank you for bringing this to our attention.

Is the weapon re-appearing if you equip it again?
In the meantime we’ve passed this over to the rest of the team for further investigation.

Should we post bugs here, or make separate bug reports?

It would be better if you could add bug reports as separate threads in the PC Bug Reports - Funcom Forums section.

This way we can keep a better eye on all reports and make sure we send them over for further investigation to the rest of the team.

I have had limited time to play Conan Exiles for a while now, but I love

the game enough that instead of playing, I decided to install Testlive again and deeply check everything I can.
I checked over 30 known bugs

and came for a couple of issues with the current (2.5) update. I will present each of them in a separate topic. Please be patient. I haven’t checked everything yet, I hope I will be able to do it soon. I didn’t have time to take

This issue is also not yet resolved. It didn’t matter much before, but now that Siptah is out of Early Access, it would be good to get things done.

I second @Croms_Faithful request for an alternative means of dealing with totems.

Perhaps: dismantling bench tears them down into simple coal
Perhaps: a specific brazier burns them, giving off colored flame similar to the color of the T3 altar light. until a different offering is added or a burn time expires, then reverts to normal flame.
Perhaps: they can be used as fuel in the large bonfire (only) with a greatly extended burn time.

Looking forward to many of the changes. Not so sure about others. Going to have to dive into testlive to… test.

Does the weapons sheath work on followers and thralls and npcs

Yes, it appears once I equip it again

I just cream my pants - good job on the new great axe animations! The katana is cool too, much better!

So with the ability to see hp bars in the world, does it include players? That’ll make it impossible to sneak up on players or stealth around their bases and scout it for a raid…?

With potions not removing the bleed effects and since you cant bandage in a PvP fight, its going to be a nightmare to fight. its just going to be bleeding meta with no way to counter it unless I missed something…?

But hey, atleast we get an idle animation with the katana /s

Almoust all changes are + but i dont like balance pass for 2h swords , i mean 2h swords should get upgrade to base dmg too , most of them are almoust the same as 1h weapons .

Welp, thats one way to get rid of some more PvP players, i sure as eggs am not going to be playing during that meta. yuck

So with the ability to see hp bars in the world, does it include players? That’ll make it impossible to sneak up on players or stealth around their bases and scout it for a raid…?

Yes, it is like running a wall hack (I am the 467 HP health bar and I am about 5-6 foundations behind the wall) but he still sees me:

oof. thats pretty bad for pvp… i do not think that is a good update

It’s been a while… I may be misremembering some things and/or they may have changed. This is for pc btw. No idea how or if it would translate to consoles.

The sigils seem to eclipse everything else in Siptah so this is for Exiled Lands. As I recall one armor piece from the champions set has the ability to cure bleeds. Maybe the helm but I’d have to check to be sure.

Just wearing it is way too slow however. For instant cures it must be placed on the hotbar and one slot on said bar kept empty at all times so the normally worn armor piece will go to the empty slot when the hotbutton for the cure item is used. I suggest adjacent buttons for this for speed’s sake. Say you have the helm on button 4 with 5 empty, you get some bleeds and hit button 4, you’re now wearing the cure helm, the bleeds are cured and your normal helm is on button 5. Now hit button 5 and you’re back to wearing your normal helm with the cure helm back on 4. Can do this almost instantly and infinitely.

Not having the empty slot will make your normally worn helm go into your inventory which will screw everything up and get you killed.

There was and may still be an issue where some armor pieces, maybe only bp’s, used from a certain slot this way would permanently disappear but I don’t recall which. Maybe 8. I’d say test with something unimportant first.

Normally I’d jump in game and check this stuff before posting about it but can’t right now. Hopefully this points you in the right direction at least.

I appreciate the attempt but I could not make a lot of sense from that word salad. If you’re making the claim that using armour pieces in the hotbar to clear bleeds and stuff, thats a terrible bandaid to an even worse game design. I get that combat should be a gamble, and a risk to engage in. But this is just a bleeding meta. Stone daggers are going to be the best item in the game for PvP lmao

If potions cant clear bleeds, fine, then bandages should. Make bandages heal not much and clear bleeds and able to use on the move.

As is stands now, this is awful for PvP and I get it, this game isnt a PvP game anymore, but it still exists and this is awful. I’m certainly not going to be playing with it with these changes going in.

There is genuinely some good ideas, new animations etc. so why didnt they add a spear brace to counter horses but we get a new idle animation for the katana…?