We’re excited to bring to you a new Testlive patch that introduces a long-requested feature, the Followers Management system! From a new tab in your player menu you’ll now be able to get information and manage your followers at a glance, adding a few new QoL improvements as well. 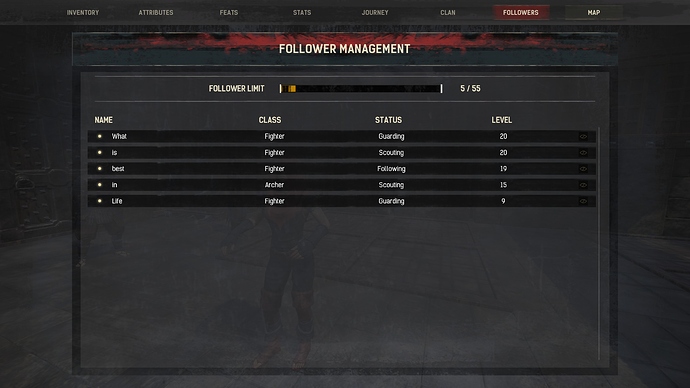 This is the first iteration of our next content patch. We’ve listened to your feedback and we agree that Testlive should be a meaningful platform for a long-term improvement of the game. This is why we’ve decided to put this patch first in your hands so you can help us detect, improve on issues and shape the experience before we release it officially on all platforms.

We are also introducing a new feature, the Funcom Launcher. The idea is for this to be a platform where you will have easy access to the latest news, forums, DLCs and patch notes, without increasing the time it takes for you to enter the game. You can read more about it in this separate thread, where we’ll be collecting all your constructive feedback about this new feature.

Don’t hesitate to give this patch a try and let us know of any issues you might find so we can fix and improve on them during the upcoming weeks.

Thanks again for your ongoing support and feedback.

With great power comes great responsibility! Following up on our follower leveling system, we’re introducing the Follower Management System. From this screen you’ll have at a glance an overview over your army of followers, giving you extra control even from a distance! You can access it from a new tab in the player menu. From this new screen you will be able to…

View your current number of followers! 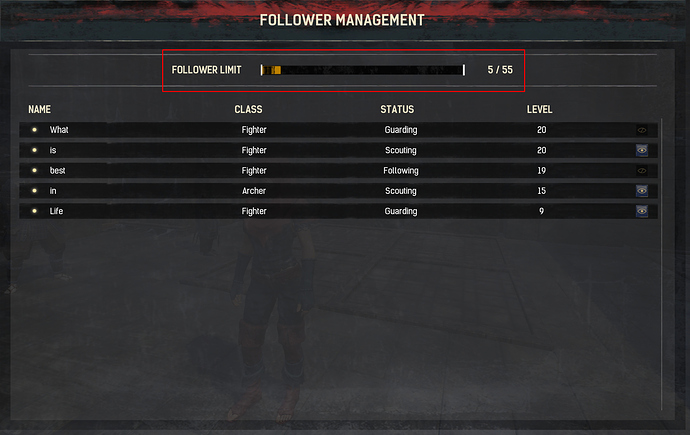 Quota2038×1286 451 KB
If you have the population cap enabled in your server or single player game, you will be able to check your current quota of followers as well as the maximum you’re allowed based on the server settings. Quick and easy!

Check stats, rescue and break bonds from a distance! 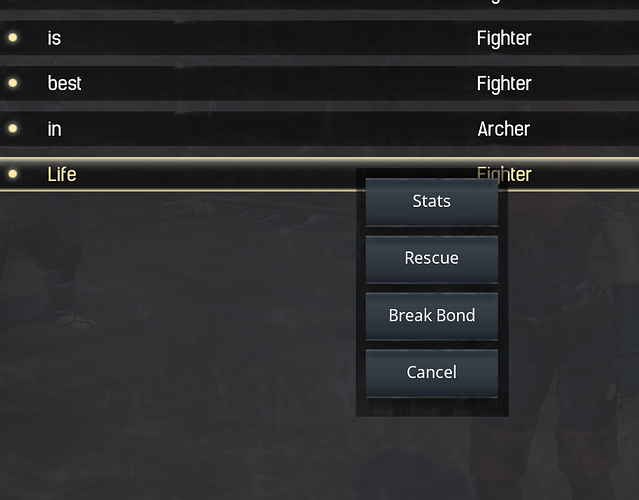 Options844×660 290 KB
From the management screen you can now break bonds with those followers you’re no longer interested in keeping. Just click on them and select “Break Bond” from the menu. Much easier than having to deal with the emotional trauma of doing it face to face!
We have also added a new extra functionality! Tired of those pesky followers who chose to disappear in the middle of the night? You can now recall them to your position (as long as you’re within your claim) to keep them under control! However, this power comes with a few caveats. First, when they get rescued, they will lose their inventory and equipment. After you have used recall, you (or your clan) won’t be able to use it again for a certain period of time (cooldown), and those followers who were engaged in combat recently will not be able to be recalled until a certain time has passed. Best of all, both timers are customizable! (via ini edit at the moment)

Locate your followers in the map!

EyeSeeYou1582×504 417 KB
Similar to the current feature where you can see your fellow clan mates in the map, you can now also keep an overview on where your followers are at any moment. Off by default, you can select which one of your thralls or pets you want to see located in the map. No more hide and seek! 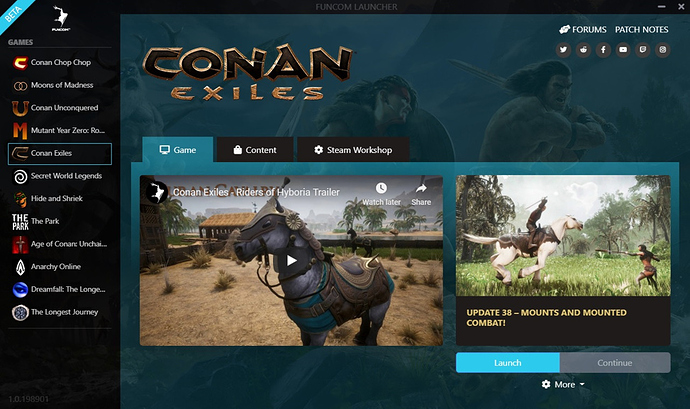 Picture1973×578 216 KB
The next time you log in to Conan Exiles via the TestLive client on Steam, you will be greeted by a new launcher window. We encourage you to try it and report any issues you encounter, as well as provide suggestions you may have for further improvements, on this separate thread.

Wow, that management interface implements pretty much everything myself and others had argued for!

I forgot to mention that his is an amazing patch and i really loved it.

First, when they get rescued, they will lose their inventory and equipment

Permanently? that sounds painful when you have endgame gear. If that’s the case, my suggestion would be giving back their gear when the the function comes off cooldown.

This way it still won’t be used for abuse (for pvp, the thrall will still be naked after being recalled) and you won’t lose that precious sword of crom

Even thought out the exploit part with recalling. Awesome. Will mess with it later today.

I can see the list of my followers, but I do not see the total number of followers against the maximum allowed.

This is what I see in my Test-Live. 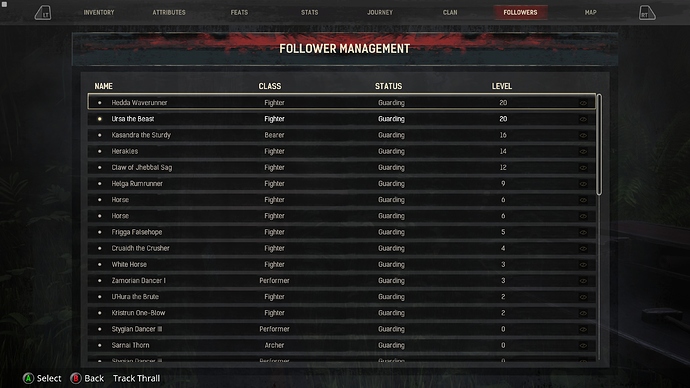 If you have the population cap enabled in your server or single player game, you will be able to check your current quota of followers as well as the maximum you’re allowed based on the server settings.

This is a great step in the Right direction! Will this System of commands be expandable in future? Commands like Attack or Stay would be a great addition to the gameplay.

Not home, but @Ignasi or anyone tested yet when you break bond, do you get the stuff in your inventory? Just wondering for those with gear that are stuck in foundations. Also, could see an exploit to use them to inta-transport farming mats back to base from bearers and caravan pets.

Possible “exploit”:
Place a caravan rhino or 5, fill with your harvest (raid loot). Pull bracelet back to base (meaning don’t need any doors on your base if you have a map room, or midnight potions). Then break bond with those 5 caravans to insta-port inventory. I know on the recall it says it loses inventory (which is smart), but wanted to confirm on breaking bond as well.

We’ve listened to your feedback and we agree that Testlive should be a meaningful platform for a long-term improvement of the game.

It’s one of the things I’ve lamented in the past (features going more or less directly from internal to Live, with no community involvement), so I can only applaud this. Obviously this requires the community to fulfill their part (if they’re interested) and use the TestLive product, provide feedback et al.

wondering what’s the point of life or if pineapple belongs in pizza (it does).

Damn straight! And Pizza is one of the points of life.

I know on the recall it says it loses inventory (which is smart), but wanted to confirm on breaking bond as well.

No reason to assume it’ll work any differently than Break Bond currently does, except at a distance. So I’d expect the “fired” thrall to drop a lootbag at their feet, wherever that may be on the map. A fair question though.

If you have the population cap enabled in your server or single player game, you will be able to check your current quota of followers as well as the maximum you’re allowed based on the server settings.

I just checked the server’s settings and the admin does not enforce population limit, which explains it. Thanks for the quick response.

Nice, nice, nice - looking forward to check it out!

When Breaking bonds the bag of loot drops where the thrall was standing. It does not magically teleport into your inventory.

Any word on the undermesh issue?

Edit: out of curiosity, what type of measures have been taking on: “Deployed measures against server flooding.”

I realy like what you did there with the follower mangement and the new launcher!. I just one question about the the new Launcher: "Is or would there be a way to join a server with mods easier then now? Cuz now it always restarts the game when not all your mods matching the mods on the server. Not that it is realy bad, but it just takes long till the game restarted to load the current/updated mods. (espacially for peeps with a low end pc) "

This is awesome! So many people are going to be thrilled with the new management system.

Also, like Mikey, I’m very pleased and relieved that Testlive is going to play a part in the development process, before everything just drops into Live.

This update has me smiling today!

Hello. Here is a little problem. Drop-down menu goes beyond the borders of the screen. htt ps://ibb.co/DVZ0p1X 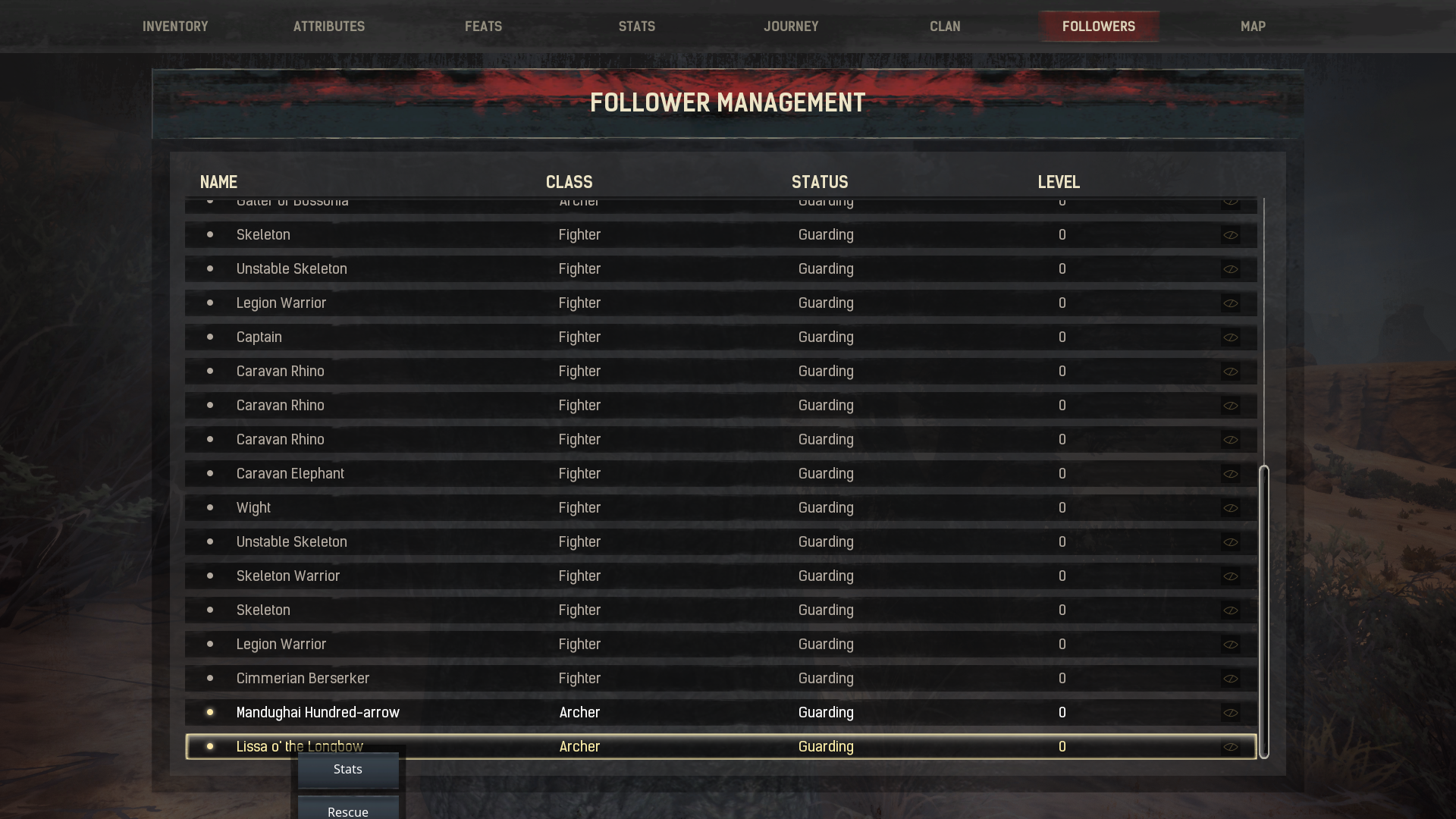